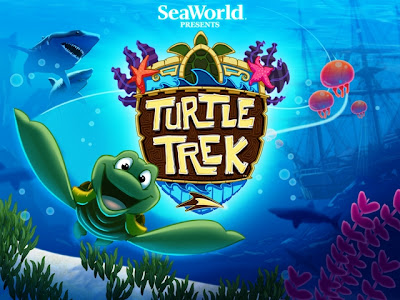 Turtle Trek is a free game download for the iPhone and iPad. Players guide an adventuresome sea turtle on a quest across the beach and into the water to find friends. They help the plucky sea turtle navigate through the perilous seascape and conquer a variety of challenges, some dangerous and some light-hearted.

With help from friendly characters such as Shamu the killer whale and Nyah the green sea turtle, players collect treasures and fill virtual sticker books with an array of ocean friends met during their trek. SeaWorld engaged Sleepy Giant through its Flying Grom label to create the new game.

Turtle Trek provides hours of fun and immersive action, and also offers an educational benefit by sharing fun facts about real sea animals. Players encounter dozens of sea creatures but when they meet a special “Ocean Friend,” they gain a collectible virtual sticker for their Trek Book. At the touch of a finger, this virtual sticker opens to reveal interesting facts and photos about the actual ocean animal that the character resembles. These facts are kept easily accessible and can be shared with family and friends.

The game’s name and theme reflect the newest attraction at SeaWorld Orlando that opened this past April. The attraction blends up-close encounters with live sea turtles and manatees with the world’s first 3D, 360 degree domed theater. In this attraction, guests get a turtle’s eye view of the world as they are surrounded on all sides – and even above – by the hyper-realistic 3D film that is journey of a special sea turtle named Nyah.

Since 2011, SeaWorld has recently begun expanding its popular brand into new media and entertainment platforms such as mobile games, movies, television and new lines of licensed consumer products.

“SeaWorld has a 50-year history of creating entertainment experiences that inspire people to connect with animals, and this type of entertainment is a natural extension for our company,” said Scott Helmstedter, Chief Creative Officer of SeaWorld Parks & Entertainment. “It is engaging and fun, but also instills a greater understanding of some of the ocean’s amazing animals.”

The game is the first to be offered under the new partnership between SeaWorld and Sleepy Giant. Sleepy Giant’s Flying Grom label is focused on working with brands to create compelling, family-oriented interactive experiences.

“We are thrilled to be working with SeaWorld, an exceptional brand and partner. SeaWorld has a rich history of providing entertainment, education, and conservation in everything they do, and ‘Turtle Trek’ extends that tradition with fun and learning,” said Matt Hannus, CEO of Sleepy Giant.


The game’s name and theme reflect the newest attraction at SeaWorld Orlando that opened this past April. The attraction blends up-close encounters with live sea turtles and manatees with the world’s first 3D, 360 degree domed theater. In this attraction, guests get a turtle’s eye view of the world as they are surrounded on all sides – and even above – by the hyper-realistic 3D film that is journey of a special sea turtle named Nyah.

The SeaWorld & Busch Gardens Conservation Fund is a registered non-profit conservation foundation that supports conservation around the world. The Fund commits 100 percent of donations to on-the-ground wildlife conservation efforts, and SeaWorld covers all of its administrative costs.

About Sleepy Giant and Flying Grom
Sleepy Giant is the leading games-as-a-service provider for game developers and publishers on all digital platforms. The company partners with creative development teams and forward-thinking entertainment companies to fund, design, launch, operate, and grow franchises. Sleepy Giant is based in Newport Beach, CA, with offices in Chicago, IL. Learn more about Sleepy Giant at www.sleepygiant.com.

Joe Kleimanhttp://wwww.themedreality.com
Raised in San Diego on theme parks, zoos, and IMAX films, InPark's Senior Correspondent Joe Kleiman would expand his childhood loves into two decades as a projectionist and theater director within the giant screen industry. In addition to his work in commercial and museum operations, Joe has volunteered his time to animal husbandry at leading facilities in California and Texas and has played a leading management role for a number of performing arts companies. Joe previously served as News Editor and has remained a contributing author to InPark Magazine since 2011. HIs writing has also appeared in Sound & Communications, LF Examiner, Jim Hill Media, The Planetarian, Behind the Thrills, and MiceChat His blog, ThemedReality.com takes an unconventional look at the attractions industry. Follow on twitter @ThemesRenewed Joe lives in Sacramento, California with his wife, dog, and a ghost.
Share
Facebook
Twitter
Linkedin
Email
Print
WhatsApp
Pinterest
ReddIt
Tumblr
Previous articleSpongeBob SquarePants makes special appearance in Orlando to announce new 4D experience, "The Great Jelly Rescue"
Next articleGreg Dauberger appointed Senior Vice President of Sales at FUNA International