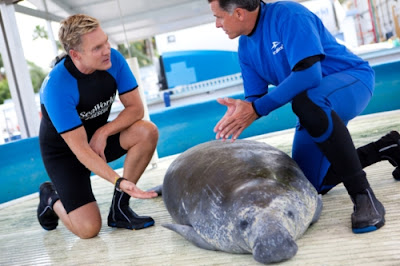 Sea Rescue will debut on April 7, 2012, and will be broadcast nationally on Saturday mornings during Litton’s Weekend Adventure, a three-hour block of six series airing on 95 percent of the country’s ABC Affiliates following Good Morning America in most markets.

“I grew up watching family-friendly shows like The Undersea World of Jacques Cousteau and Wild Kingdom. These shows entertained us with beautiful images of nature, yet taught us that we are the guardians of delicate wildlife. It’s a dream come true to share stories of the dedicated men and women who devote their lives to rescuing animals in danger. Wouldn’t it be great if this show inspires yet another generation to appreciate the wonders of the sea,” said Champion.

“SeaWorld has rescued 20,000 animals over the last 40 years, and we are thrilled to bring viewers inside our most extraordinary and heartfelt stories of rescue, rehabilitation and release,” said Jim Atchison, Chief Executive Officer and President of SeaWorld Parks & Entertainment. “Our wildlife rescue teams are on call 24/7 and every day is a new adventure, whether airlifting a manatee by helicopter out of the Everglades, replicating mother’s milk for an orphaned gray whale, or creating a back brace for a stranded pilot whale with scoliosis.”

Sea Rescue will showcase amazing stories of the rescue, rehabilitation and return to the wild of marine animals by a team of dedicated veterinarians, animal care experts, animal science researchers and government authorities. Led by one of the nation’s most recognized and respected journalists, Sam Champion, Sea Rescue will take viewers on incredible and heartwarming adventures through a combination of first-hand accounts, expert insight and remarkable footage.

ABOUT SEAWORLD PARKS & ENTERTAINMENT
SeaWorld Parks & Entertainment inspires millions to celebrate, connect, and care for the natural world through the power of entertainment. The company is best known for its 10 U.S. theme parks including SeaWorld, Busch Gardens and Sesame Place, and also recently expanded into new entertainment enterprises to connect people to nature through movies, television and digital media.

SeaWorld is one of the world’s foremost zoological organizations and a worldwide leader in conservation, wildlife rescue and marine animal welfare. The company operates one of the world’s most respected wildlife rescue programs and has helped animals in need — ill, injured, orphaned and abandoned — for more than four decades. More than 20,000 animals have been rescued by the park’s animal experts including whales, dolphins, seals, sea lions, manatees, sea turtles and birds. The majority of these animals are successfully treated by SeaWorld veterinarians, rehabilitated and returned to the wild.

Joe Kleimanhttp://wwww.themedreality.com
Raised in San Diego on theme parks, zoos, and IMAX films, InPark's Senior Correspondent Joe Kleiman would expand his childhood loves into two decades as a projectionist and theater director within the giant screen industry. In addition to his work in commercial and museum operations, Joe has volunteered his time to animal husbandry at leading facilities in California and Texas and has played a leading management role for a number of performing arts companies. Joe previously served as News Editor and has remained a contributing author to InPark Magazine since 2011. HIs writing has also appeared in Sound & Communications, LF Examiner, Jim Hill Media, The Planetarian, Behind the Thrills, and MiceChat His blog, ThemedReality.com takes an unconventional look at the attractions industry. Follow on twitter @ThemesRenewed Joe lives in Sacramento, California with his wife, dog, and a ghost.
Share
Facebook
Twitter
Linkedin
Email
Print
WhatsApp
Pinterest
ReddIt
Tumblr
Previous articleResorts World Sentosa Launches Loyalty Program
Next articleIPM News Presents Asian Casino Report: The Vegas Pack