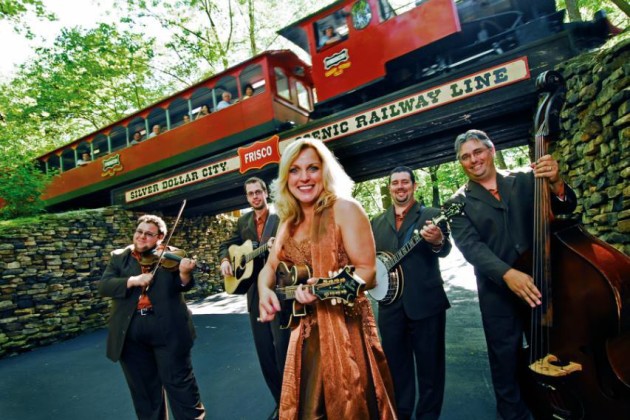 ABOVE: Rhonda Vincent and The Rage

Branson, MO, USA (May 5, 2015) — One of the nation’s top bluegrass events, Silver Dollar City’s Bluegrass & BBQ brings the heat, from the hottest bands in bluegrass to the slow-smoked barbecue, May 7 – 25 at the Branson, Missouri theme park. The festival “presents more bluegrass bands on multiple stages to more new audiences than any other event in the nation,” said Nancy Cardwell, International Bluegrass Music Association (IBMA) Executive Director 2012-14.

Awarded Bluegrass Event of the Year by the IBMA, the world’s largest organization of bluegrass music professionals, Bluegrass & BBQ this year presents more than 40 bands on multiple stages throughout the park, with international award-winning musicians, Grammy nominees, fan favorites and chart-climbing new bands coming for the festival.

Newer artists include Flatt Lonesome, Driven, The Lindsey Family, The Baker Family and The Willis Clan, featured on America’s Got Talent and starring in their own show on the TLC network. Unique artists include The Kruger Brothers, bluegrass musicians from Switzerland, whose repertoire ranges from traditional bluegrass to Bach to R&B songs.

Spotlighting the next generation of bluegrass talent, the park presents an annual Youth in Bluegrass band contest, set for May 23, with 21 bands from around the country competing for honors.

Another top feature is the barbecue, and The House of BBQ serves up a flavor feast from St. Louis-style ribs and smoked chicken to Texas brisket and pulled pork — direct from large outdoor charcoal grills and the park’s custom-made 20-foot long smoker. An all-you-can-eat BBQ rib feast is featured on the Square each afternoon with fall-off-the-bone smoked ribs in four flavors, plus SDC’s famous 18-hour smoked brisket, along with smoked pork, chicken and sausage.