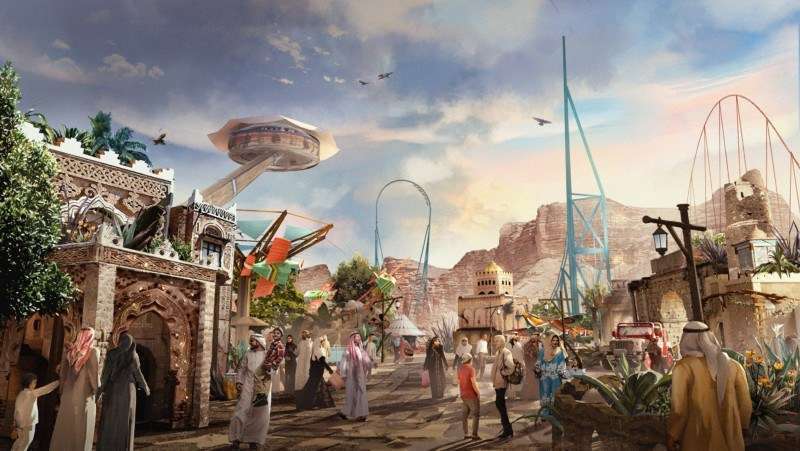 November 7, 2019 — Six Flags Entertainment Corporation today announced that Brian Machamer has been named Park President of Six Flags Qiddiya. The first Six Flags-branded theme park in the Kingdom will be the centerpiece of Qiddiya, Saudi Arabia’s capital of entertainment, sports and the arts, now under construction 40km from the capital city of Riyadh.

Mr. Machamer is a respected and proven industry veteran with more than 25 years of experience, having overseen multiple international theme park developments at a senior leadership level in regions such as Singapore, United Arab Emirates, and Malaysia.

“I am thrilled to welcome Brian to the Six Flags International team to lead one of the most ambitious theme park and entertainment projects on the planet,” said Six Flags International Development President David McKillips. “Brian’s extensive development and park operational experience will be invaluable as we move forward to create a world-class global destination.”

“This is the opportunity of a lifetime and I am excited to join this impressive team to help introduce Six Flags’ signature brand of thrills to the Kingdom of Saudi Arabia,” said Mr. Machamer. “The Six Flags name is synonymous with innovation at the highest level and Six Flags Qiddiya will be a game changer in the region,” added Machamer.

Mr. Machamer began his career with Universal Studios Florida in 1990 where he spent over ten years, serving in various operational roles as he moved up the ranks. As Park President of Six Flags Qiddiya, he will be responsible for all aspects of the park, including strategic planning, budgeting, and operations.

Six Flags Qiddiya will be one of the key assets to be unveiled as part of the first phase of Qiddiya, which is being built to provide fun and professional opportunities to the Saudi population. It will cover 32 hectares (79 acres) and feature 28 uniquely themed rides and attractions across six lands: The City of Thrills, Discovery Springs, Steam Town, Twilight Gardens, Valley of Fortune and Grand Exposition. The park will also boast a number of record-breaking roller coasters including The Falcon’s Flight, the longest, tallest and fastest roller coaster in the world. Six Flags Qiddiya is scheduled to open in 2023.

Joe Kleimanhttp://wwww.themedreality.com
Raised in San Diego on theme parks, zoos, and IMAX films, InPark's Senior Correspondent Joe Kleiman would expand his childhood loves into two decades as a projectionist and theater director within the giant screen industry. In addition to his work in commercial and museum operations, Joe has volunteered his time to animal husbandry at leading facilities in California and Texas and has played a leading management role for a number of performing arts companies. Joe previously served as News Editor and has remained a contributing author to InPark Magazine since 2011. HIs writing has also appeared in Sound & Communications, LF Examiner, Jim Hill Media, The Planetarian, Behind the Thrills, and MiceChat His blog, ThemedReality.com takes an unconventional look at the attractions industry. Follow on twitter @ThemesRenewed Joe lives in Sacramento, California with his wife, dog, and a ghost.
Share
Facebook
Twitter
Linkedin
Email
Print
WhatsApp
Pinterest
ReddIt
Tumblr
Previous articleFormer Starwood executive Sergio Rivera named new CEO of SeaWorld Parks & Entertainment
Next articleKnott’s Berry Farm and Triotech resurrect classic dark ride for new generation of guests