By Martin Palicki
July 11, 2011
Facebook
Twitter
Linkedin
Email
Print
WhatsApp
Pinterest
ReddIt
Tumblr
Parks and attractions like to tout rides that “offer a new experience every time.” Often, those differences are subtle. The new Green Lantern: First Flight coaster at Six Flags Magic Mountain really lives up to the claim, according to this report by InPark chief editor Martin Palicki.

The Intamin coaster features cars that ride on the side of the track, and spin based on the weight distribution in the car. The ride layout is compact. Think of a plink playing board, where the disc bounces up and down quickly, moving left and right before settling at the bottom. Now turn the volume up.

There are essentially three parts to the ride: The lift, Block A, and Block B (separated by block brakes). The lift up is quick and smooth, with little fanfare, but with a great unobstructed view of the park.

Block A starts out with a quick dip and flat section before the first of several drops. This is relatively tame section of the ride, allowing guests to get used to the unique sensation of not really knowing where the ride is going.

Block B is certainly more intense, with bigger drops and faster turns that have a tendency to make the cars flip around – sometimes more than others.

There is no lateral movement in the ride. It’s simply up and down, while rocking forward and backward. But it’s fun, and a new experience.
I rode three times. The first two times I faced backwards (forwards and backwards are somewhat relative…as the car flips, the front becomes the back, and vice versa…but I felt the seats that face out of the station feel like the “back”). The third time I faced forwards, and it was a completely different experience.

My on-ride trip (forwards) with Ryan from Planet Six.

And of the three rides, the second one provided the most intense action. The B block threw us face down towards the ground with intense force twice, and we had so much rotating momentum our car completed two additional flips once we were stopped back in the station. I think we were screaming the whole time. 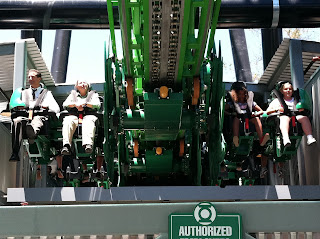 The only downsides to the attraction are its low throughput and a queue that travels underneath the station in a hot and breeze-free tunnel.
The uncomfortable queue was worth it, though, and Green Lantern: First Flight will prove to be a popular addition to the coaster-dominant park.
Videos courtesy of IPM correspondent Jeffrey Killian. On-ride footage courtesy of Six Flags Magic Mountain and PlanetSIX.
Related:
Official Six Flags press release from July 2011