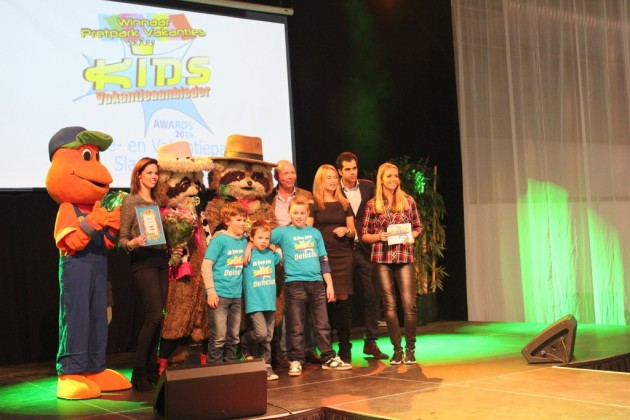 Slagharen, The Netherlands — Amusement & holiday park Slagharen won during the Holiday Fair in Utrecht the Kids Holiday Provider of the Year Award 2015 in the category “Amusement holidays.” Randy and Rosie and thirty Kids Holiday Guide Detectives joined Kids Top 20 personality Monique Smit at the ceremony. Over the past 4 weeks, more than five thousand children and parents voted for their favorite destination. The competition is a project of Kids Holiday Guide and is held annually in conjunction with the Holiday Fair.

In the category ‘theme parks’, no less than 60% voted for Slagharen, where you go from one adventure to another, with more than thirty attractions, including the new Jules Verne Adventure Land, theater shows, parades and stunt shows, and where you can stay inside a wigwam.

“We have won an even bigger audience in this category, which makes us very proud! Here we do it for all,”says director Wouter Dekkers.

Joe Kleimanhttp://wwww.themedreality.com
Raised in San Diego on theme parks, zoos, and IMAX films, InPark's Senior Correspondent Joe Kleiman would expand his childhood loves into two decades as a projectionist and theater director within the giant screen industry. In addition to his work in commercial and museum operations, Joe has volunteered his time to animal husbandry at leading facilities in California and Texas and has played a leading management role for a number of performing arts companies. Joe previously served as News Editor and has remained a contributing author to InPark Magazine since 2011. HIs writing has also appeared in Sound & Communications, LF Examiner, Jim Hill Media, The Planetarian, Behind the Thrills, and MiceChat His blog, ThemedReality.com takes an unconventional look at the attractions industry. Follow on twitter @ThemesRenewed Joe lives in Sacramento, California with his wife, dog, and a ghost.
Share
Facebook
Twitter
Linkedin
Email
Print
WhatsApp
Pinterest
ReddIt
Tumblr
Previous articleThinkwell Group In-House Counsel Aamna Jalal Honored by Association of Media & Entertainment Counsel
Next articleBRC Imagination Arts and ECA2 Engage the Senses at Thea Case Studies Day at the TEA Summit