Disney’s Hollywood Studios unleashes Slinky Dog Dash in the new Toy Story Land at the Walt Disney World Resort. This multi-launch, family-friendly roller coaster careens around bends and “catches air” over camelback humps as it runs across the 11-acre land.

As honorary toys, guests have Andy of Pixar Animation Studios’ Toy Story films to thank for this incredibly fun experience. They get to ride his creation and be inside Slinky Dog’s coils as the lovable pooch twists and turns around the track. It all takes place in Andy’s backyard, where he used the Dash & Dodge Mega Coaster Play Kit to assemble this speedy toy.

Andy’s idea for his double-launch coaster – a Disney first – was to pick everyone’s favorite floppy-eared dachshund with the stretching coil body – Slinky Dog – to send guests around the track. The attraction’s ride vehicles are spring-tailed spinoffs of Slinky, the iconic American toy from the 1940s. Track and supports for the coaster are done up in bright colors of red, orange, yellow and blue.

Guests approaching the ride launch see Andy’s plans sketched out in Crayola crayon on notebook paper. Glue bottles, empty toy boxes and stray coaster parts and pieces are strewn about – Andy’s pet project was clearly a work in progress when he was called away. But that’s when the toys will play. 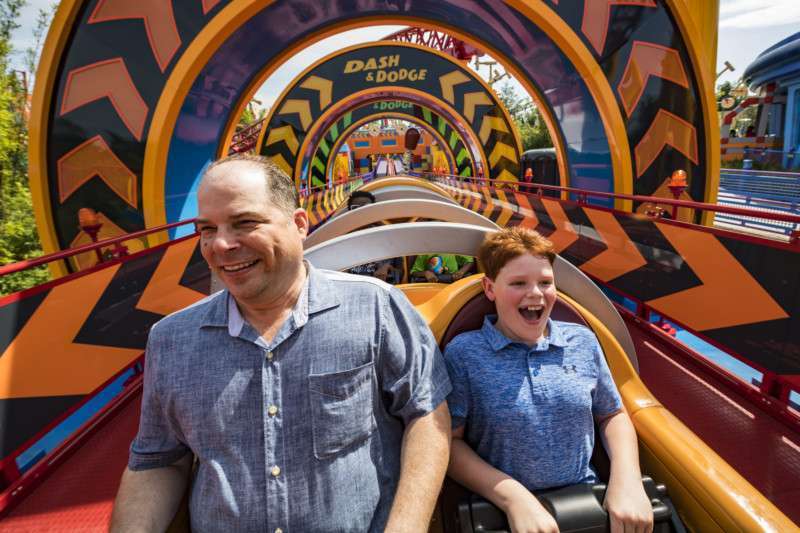 In one scene, the coaster swoops around blocks Andy stacked around his Jenga game. Rex, the toy dinosaur, is precariously perched atop the unstable Jenga stack trying to decorate the toy block city by stringing up colored Christmas lights – a daunting task for a dinosaur with short front arms. Jessie comes to his rescue, working to untangle Rex’s dino-sized predicament.

Andy also tricked out his coaster creation with a power booster. When Slinky Dog Dash hits its midway point, the coaster stops, reverses a few yards, then shoots through multiple rings pulsing with sounds, spinners and flashing lights to launch riders into the second act of the ride experience.

“The first half of the ride is many swirls, turns and dips, and after the second launch come a drop and camelback humps – as if you were playing with a Slinky Dog toy,” explained Dave Minichiello, Executive Creative Director of Walt Disney Imagineering. 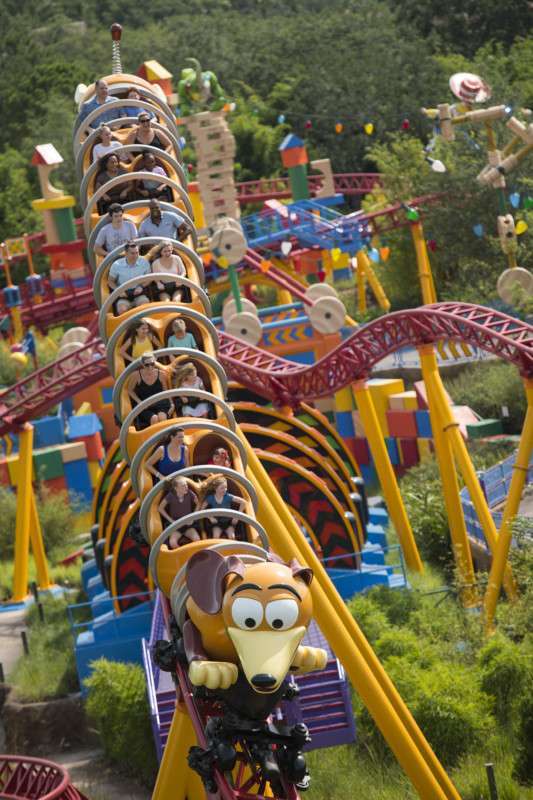 Andy saved one last surprise for his coaster’s finale: Wheezy, the squeaky toy penguin from the Toy Story films, breaks into a rendition of “You’ve Got a Friend in Me.” Created especially for Slinky Dog Dash, the Audio-Animatronics figure of Wheezy is unique among Disney Parks globally. Toys and toy packaging complete the scene, including a Rubik’s Cube, a game canister for Pick-Up Snakes and toy wooden blocks spelling out F-U-N – all against the backdrop of a towering book, Mr. Pricklepants’ “Songs for Singing,” compiled by the huggable hedgehog from “Toy Story 3.”

“As Toy Story Land welcomes our guests – as toys – into Andy’s backyard, Slinky Dog Dash invites them into Andy’s imagination,” said Phil Holmes, Vice President of Disney’s Hollywood Studios. “What Andy has dreamed up will deliver nonstop coaster fun for all ages.”

Joe Kleimanhttp://wwww.themedreality.com
Raised in San Diego on theme parks, zoos, and IMAX films, InPark's Senior Correspondent Joe Kleiman would expand his childhood loves into two decades as a projectionist and theater director within the giant screen industry. In addition to his work in commercial and museum operations, Joe has volunteered his time to animal husbandry at leading facilities in California and Texas and has played a leading management role for a number of performing arts companies. Joe previously served as News Editor and has remained a contributing author to InPark Magazine since 2011. HIs writing has also appeared in Sound & Communications, LF Examiner, Jim Hill Media, The Planetarian, Behind the Thrills, and MiceChat His blog, ThemedReality.com takes an unconventional look at the attractions industry. Follow on twitter @ThemesRenewed Joe lives in Sacramento, California with his wife, dog, and a ghost.
Share
Facebook
Twitter
Linkedin
Email
Print
WhatsApp
Pinterest
ReddIt
Tumblr
Previous articleDisney Parks introduces new interactive mobile app
Next articleWoody’s Lunch Box puts modern spin on comfort food at Walt Disney World’s Toy Story Land