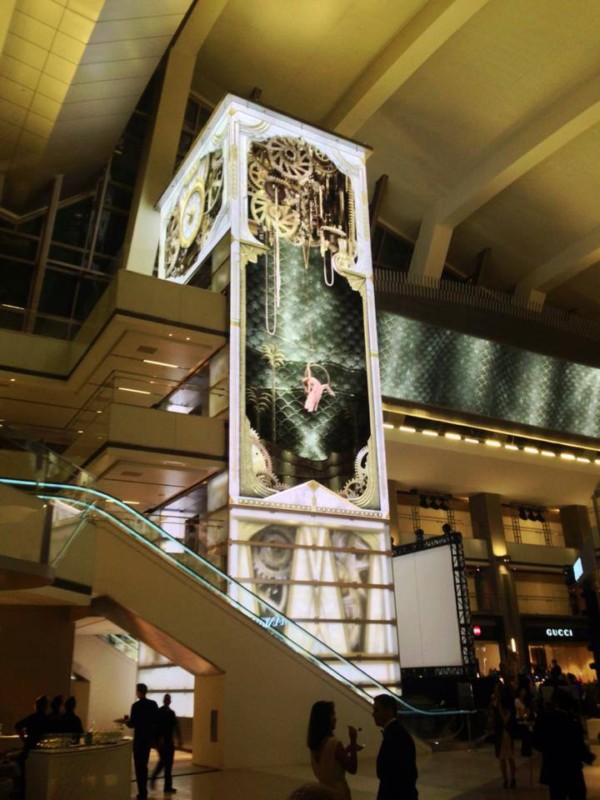 Miami, FL, USA — Airports wing passengers to their destinations, but they’re not often known as destinations themselves. All that may change with the dazzling architectural entertainment aspects of the new Tom Bradley International Terminal at Los Angeles Airport (LAX), for which Smart Monkeys, Inc. provided technical consulting, systems design, programming and implementation. People may start buying plane tickets just to view the innovative media features enhancing passenger departures and arrivals.

The Integrated Environmental Media System (IEMS) has been designed to create both an unprecedented passenger experience and a new source of non-aeronautical revenues for LAX. Developed by MRA International in concert with Los Angeles World Airport’s (LAWA) executive team, the IEMS built within the Bradley West terminal architecture offers the first corporate sponsorship programs in a U.S. airport.

The IEMS consists of seven media features, with approximately 9,600 square feet of combined active display area, designed by Marcela Sardi of Sardi Design, who also acted as creative director for the content.

“We worked two years and a half on the IEMS,” says Alan Anderson, Technical Director at Smart Monkeys, Inc. “The scale of the project is absolutely massive, and it was all produced in one go – not over a period of time.”

“Smart Monkeys was invaluable to this project,” commented Mike Doucette, Chief of Airport Planning at Los Angeles World Airports. “Their breadth of knowledge and ability to manage such a large project under all of our time and critical constraints was critical to the success of this project. We couldn’t have done this without them.”

“All of the media features are inside the TSA security zone, not in the terminal’s entry, so access to the hardware was going to be limited,” Anderson notes. “The system had to be able to run 24/7 and be operated by a terminal media operator who could take 100 percent possession of the system. Since the media features were open to corporate sponsorship, we had to guarantee a system that could display sponsor branding accurately and with minimum downtime to provide revenue for the airport. These considerations guided our choices.”

After Sardi Design recommended Smart Monkeys, Inc. MRA International interviewed them and discovered that “they understood the issues immediately. They really had deep knowledge, unlike anyone else we knew. Environmental media is very cutting-edge, and Smart Monkeys was the most experienced of anyone out there,” saidMike Rubin, head of MRA International Media Features Enhance the Passenger Experience

Of the seven media features comprising the IEMS, six are dedicated to departures and one to arrivals. Montreal’s Moment Factory was executive content producer for the features; LA’s Digital Kitchen was content co-producer responsible for giving expression to the LAX brand across the features and developing the Destination Board content. 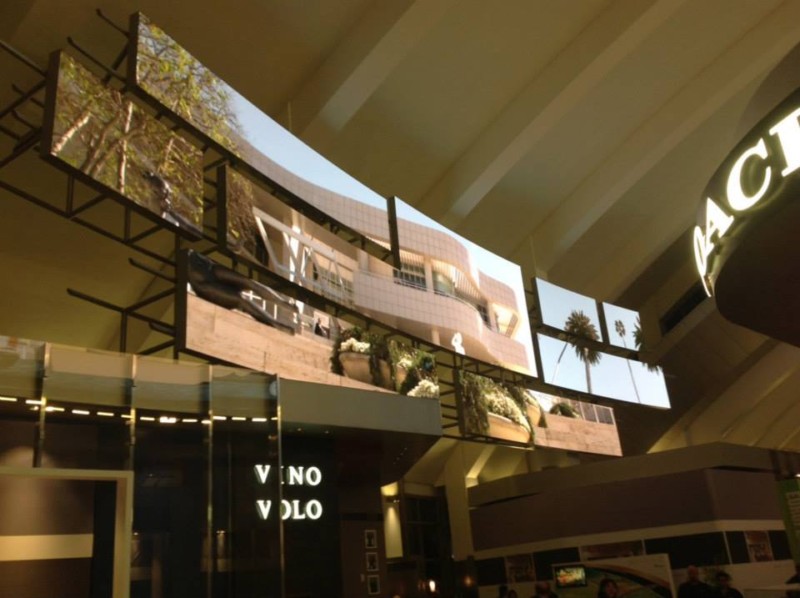 The Bon Voyage Wall delivers a unique send off for departing passengers as they clear security and cross the departure bridge to the Great Hall.

The Story Board is a 120-foot long multi-panel LED display that spans the west end of the Great Hall and is suspended on custom trussing so the panels appear to be floating.

The Time Tower is built around the Great Hall’s elevator tower. The 72-foot high, four-sided media feature has an upper surface composed of high resolution 6mm LEDs and a base of 10mm LEDs behind diffused glass panels whose interactive surface reacts to the gestures of passengers as they approach.

Above the Time Tower is the curved Destination Board, which displays flight departure information while entertaining passengers with visual data on destination cities. An arched LED crest displays graceful patterns related to the display.

Two Portals provide a transitional experience as passengers leave the Great Hall en route to their departure gates. Each Portal consists of ten 28-foot tall columns of vertically-stacked 55-inch LCD monitors. As passengers walk by the Portals their movement causes the content to move and transform.

To ensure the redundancy and robustness of the IEMS, Smart Monkeys, Inc. devised a strong network backbone, created control and data management systems, and specified video servers and players that would withstand the rigors of almost constant operation.

Electrosonic was the integration company for the entire system. Their scope included backend equipment and control room out to the media features and gate displays. The two teams worked hand-in-hand for over a year to bring the system to life.

“Selecting devices for what they do and stacking them in a rack is one way to design a system,” says Stephan Villet, Lead Designer at Smart Monkeys, Inc., “but we believe that there is a dramatic difference between Systems Integration and a fully Integrated System. Our entire industry is talking about AV/IT merging, but using an IT network to transport media and replacing AV-specific connectors with RJ45s is just scratching the surface.”

At the heart of the system is the Smart Monkeys, Inc. ISAAC platform (Integrated Scheduler and Automation Controller). This platform is a Virtualization cluster, comprising enterprise servers and a SAN. The technology allows for unparalleled reliability, redundancy and scalability in an incredibly compact system.

“The equipment takes up just 8 RUs,” Anderson explains, “instead of two or five racks if everything was on individual servers.”

Choosing an enterprise-level IT solution to operate an AV system “is a more pragmatic approach to AV,” he notes. “Our point of view is that the entire world runs on IT; IT doesn’t stop at the doorstep of AV. It can be very useful to an AV installation.”

It’s Smart Monkeys, Inc.’s ISAAC intelligent platform that “makes the system a smart system and not just a playback system,” Anderson points out. “We designed and programmed a system that allows the operator to schedule all the media in the terminal from a single scheduling-engine interface.”

Seven Grass Valley K2 quad-channel play-out units, 20 X-Agora dual-channel interactive players and more than 20 SpinetiX single-channel HD digital signage players can play back media anywhere. Considering the complexity of controlling all the media in the new terminal – not just the content for the media features but the media for the gates as well – Smart Monkeys, Inc. rose to the challenge of making control as easy as possible for the operator.

“We figured out a way to have a unified interface access point for most operations,” says Dennis Cole, Smart Monkeys, Inc. Network Architect. “We designed a web-based GUI that allows everything to take place through the browser. We manage the credentials for users of different levels of the system, then they get into their mode of operation – scheduling, media ingest, monitoring – and access the control panels embedded inside part of the web page.”

The control system designed by Smart Monkeys, Inc. is scalable and can be expanded to accept more database information. “We have allowed the corporate sponsors and operator to push things further,” says Anderson. “For example, a sponsor could decide to bring in mobile app interactivity to respond to their communications needs.”

“Our understanding of software programming and our expertise in control architecture drives us to redefine the way AV systems are designed,” adds Mitch Schuh, Smart Monkeys, Inc. Software Architect. “We selected equipment that thrives when controlled via software, instead of more conventional operation.”

Anderson gives kudos to MRA International working with LAX for “setting the bar really high for sponsors. There’s a certain ‘wow’ factor built into the foundation content, but there’s room for that content to grow and soar.”

“It’s one of the biggest jobs we’ve ever done and shows our ability to manage jobs this size and bigger,” says Villet. “This project also demonstrates that we work best as an integral part of the process active from the beginning when the needs were defined, then designing systems based on those needs and programming and implementing the systems.”

MRA International’s Rubin reports that Smart Monkeys, Inc. “performed remarkably well. Without them we wouldn’t have been able to deliver the system we have. Because this is a public project, they had to design a system that could receive different manufacturers’ products even when they didn’t know what those products would be. And the system had to be very robust and have a lot of redundancy. It had to be designed as turnkey system so that a third party could run it.”

The result is “a stunning success,” Rubin says. “Smart Monkeys, Inc. was the braintrust of the system. Everyone on this team has great respect for them.”

Joe Kleimanhttp://wwww.themedreality.com
Raised in San Diego on theme parks, zoos, and IMAX films, InPark's Senior Correspondent Joe Kleiman would expand his childhood loves into two decades as a projectionist and theater director within the giant screen industry. In addition to his work in commercial and museum operations, Joe has volunteered his time to animal husbandry at leading facilities in California and Texas and has played a leading management role for a number of performing arts companies. Joe previously served as News Editor and has remained a contributing author to InPark Magazine since 2011. HIs writing has also appeared in Sound & Communications, LF Examiner, Jim Hill Media, The Planetarian, Behind the Thrills, and MiceChat His blog, ThemedReality.com takes an unconventional look at the attractions industry. Follow on twitter @ThemesRenewed Joe lives in Sacramento, California with his wife, dog, and a ghost.
Share
Facebook
Twitter
Linkedin
Email
Print
WhatsApp
Pinterest
ReddIt
Tumblr
Previous articleFilm Submissions Now Being Accepted for 2014 GSCA Film Expo
Next articlePreliminary Schedule Announced for IMERSA Summit 2014