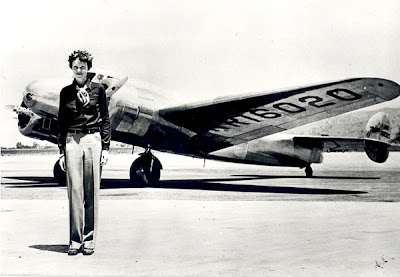 Washington, DC, USA (March 22, 2012) — Amelia Earhart, known as “Lady Lindy,” was an aviation pioneer, and her fame extended far beyond her flying feats. In addition to setting aviation records, she founded a pilots’ organization for women called The Ninety-Nines, was a member of the faculty at Purdue University and campaigned for women’s rights.

A new exhibition at the Smithsonian’s National Portrait Gallery, “One Life: Amelia Earhart,” will recognize her life and remarkable career with a special focus on her commitment to women’s rights. Earhart’s biography will be told through portraits—photographs, paintings and drawings—and other objects that tell more about her experiences—her pilot’s license, leather flying helmet and smelling salts. The one-room exhibition will be on view June 29 through May 27, 2013.

“Amelia Earhart’s impact on American culture extends beyond her record-setting aviation feats,” said Martin Sullivan, director of the National Portrait Gallery. “She was also an advocate for aviation and women and championed the first commercial airlines. Now we take for granted the convenience of air travel and equal rights for all, but in the 1920s and ’30s these positions reflected the ideals of a bold visionary.”

Earhart was a crew member in her first wildly successful flight across the Atlantic. When she returned to the U.S. she made a concerted effort to laud the accomplishment of the pilot and co-pilot. However, it was clear that she was America’s darling. Soon, she became a columnist for Cosmopolitan magazine and began lecturing around the country. With a breakneck pace she still continued to pursue her own record-breaking flights. In 1929 she set an altitude record, reaching 18,415 feet. In 1932 she piloted a solo flight across the Atlantic, the first woman to do so.

Through her speaking engagements, writing and appearances, Earhart campaigned for women’s equality. She was ambivalent about her celebrity status; however, she embraced it, understanding she was a standard-bearer for women in aviation and also for a practical reason—to fund her expensive pursuit of flying planes. Partnered with George Putnam, who helped with public engagements and books, she also participated in product-placement advertising campaigns. The exhibition includes an example from a Lucky Strike advertisement, as well as an insight into her private life: her marriage contract with Putnam.

Coinciding with the 75th anniversary of Earhart’s disappearance, this one-room exhibition brings together many objects from the collections of the National Portrait Gallery and the Smithsonian’s National Air and Space Museum. Rare vintage film and audio excerpts featuring Earhart will also be available in a special video kiosk in the gallery.

This exhibition has been funded by the Guenther and Siewchin Yong Sommer Endowment Fund.

The Smithsonian’s National Portrait Gallery tells the history of America through the individuals who have shaped its culture. Through the visual arts, performing arts and new media, the Portrait Gallery portrays poets and presidents, visionaries and villains, actors and activists whose lives tell the American story.

Joe Kleimanhttp://wwww.themedreality.com
Raised in San Diego on theme parks, zoos, and IMAX films, InPark's Senior Correspondent Joe Kleiman would expand his childhood loves into two decades as a projectionist and theater director within the giant screen industry. In addition to his work in commercial and museum operations, Joe has volunteered his time to animal husbandry at leading facilities in California and Texas and has played a leading management role for a number of performing arts companies. Joe previously served as News Editor and has remained a contributing author to InPark Magazine since 2011. HIs writing has also appeared in Sound & Communications, LF Examiner, Jim Hill Media, The Planetarian, Behind the Thrills, and MiceChat His blog, ThemedReality.com takes an unconventional look at the attractions industry. Follow on twitter @ThemesRenewed Joe lives in Sacramento, California with his wife, dog, and a ghost.
Share
Facebook
Twitter
Linkedin
Email
Print
WhatsApp
Pinterest
ReddIt
Tumblr
Previous articleEP Henry Paves the Way to Victory at Xfinity Live!
Next articleNational Postal Museum Puts New Stamp on Hindenburg and Titanic Disasters