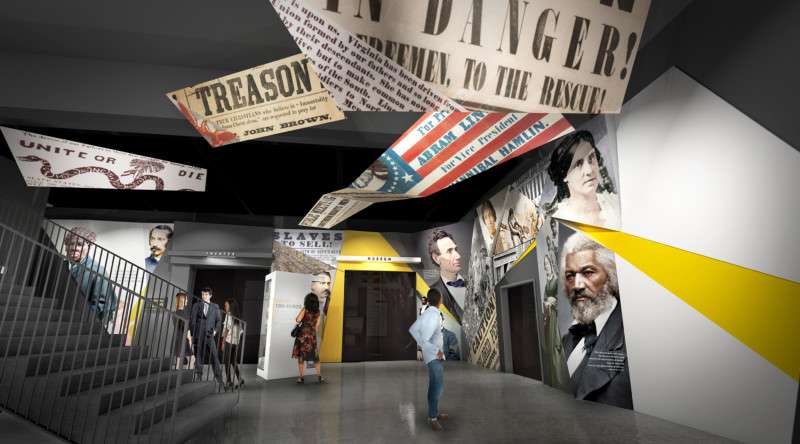 The new American Civil War Museum in Richmond – the former capital of the Confederacy — tells the story of the war in a new and non-traditional way, creating an immersive experience that harnesses the power of personal narratives and multiple perspectives.

Designed and fabricated by Solid Light, a full-service firm that designs and builds visitor experiences, the museum places less emphasis on battles and military strategy and instead focuses on the war’s impact on people’s lives—and on how the legacy of slavery and a fractured nation continues to shape the country.

The American Civil War Museum merges existing collections from the former Museum of the Confederacy and the former American Civil War Center at Historic Tredegar Ironworks, where munitions for the Confederacy were manufactured. The result is one museum that integrates a new building with the ruins of the Tredegar Ironworks and tells a story in which disagreements over slavery caused the Civil War, using multiple voices and bold imagery that bring the conflict to life for a modern audience.

Stories from Confederate and Union soldiers, civilians and African Americans are shared through personal accounts, powerful wartime artifacts as well as multi-media images and video that create intimate moments of personal connection within the epic sweep of events such as Emancipation. Throughout the museum, design elements such as fragments of images are displayed in a disjointed collage-like presentation symbolizing the chaos of the nation.

“Traditionally, the story of the Civil War focuses on battles and military strategy. Working closely with American Civil War Museum CEO Christy Coleman, we designed the exhibits to create a more inclusive and authentic experience true to history and the people of the time, but told in a way that would leave an impression on an audience  accustomed  to high-impact, visual storytelling,” said Solid Light Owner/President Cynthia Torp. “Every element, from the color palette and large historic photos to the artifacts, videos and audio that share personal accounts, was designed to bring visitors face-to-face with historical individuals who lived the war. Our hope is that visitors connect with these stories and leave with a greater understanding of the personal choices people had to make during the war.”

To demonstrate the conflict and turmoil of the time without overwhelming visitors, Solid Light used their emotional mapping concept—the intentional planning of stories for maximum experience—to relieve the intensity of the personal stories by inserting moments of rest between them. Similar to how a play is structured, the galleries take the visitor through each year of the war and focus on specific themes and the accounts of those involved.

“Solid Light has done a masterful job of bringing our vision of a useable and meaningful history to fruition,” said American Civil War Museum CEO Christy Coleman. “Their design captures key elements that were critical in telling this story.”

Visitors will engage with innovative multi-media experiences in mini-theaters throughout the museum, capturing events such as the Henry House—named for the family that lived there— frozen mid-explosion during the Battle of First Manassas and an underground cave used for civilian shelter during the Siege of Vicksburg, Mississippi. Artifacts, such as the mourning dress of a Henry family member, are woven into the media elements, integrating traditional museum constructs with cutting-edge technology.

Additional design elements include the use of colorized period imagery to make the stories more relevant as well as sound effects, and interactive touch-screen kiosks highlighting battles that blend traditional storytelling of the war with the personal images.

The $4 million project marks Solid Light’s latest collaboration in the museum and cultural institution space, along with their work on the American Saddlebred Museum, the Delta Blues Museum and Lexington’s African American Heritage Trail.

Joe Kleimanhttp://wwww.themedreality.com
Raised in San Diego on theme parks, zoos, and IMAX films, InPark's Senior Correspondent Joe Kleiman would expand his childhood loves into two decades as a projectionist and theater director within the giant screen industry. In addition to his work in commercial and museum operations, Joe has volunteered his time to animal husbandry at leading facilities in California and Texas and has played a leading management role for a number of performing arts companies. Joe previously served as News Editor and has remained a contributing author to InPark Magazine since 2011. HIs writing has also appeared in Sound & Communications, LF Examiner, Jim Hill Media, The Planetarian, Behind the Thrills, and MiceChat His blog, ThemedReality.com takes an unconventional look at the attractions industry. Follow on twitter @ThemesRenewed Joe lives in Sacramento, California with his wife, dog, and a ghost.
Share
Facebook
Twitter
Linkedin
Email
Print
WhatsApp
Pinterest
ReddIt
Tumblr
Previous articleSt Louis Zoo debuts plans for innovative primate habitat
Next articleRaven Sun Creative and Sally Corporation bring Reese’s Cupfusion interactive dark ride to Hersheypark