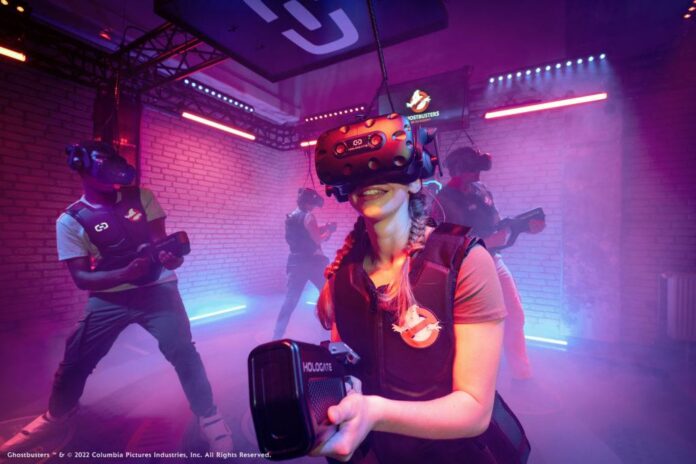 Sony Pictures Virtual Reality (SPVR), in association with Ghost Corps, announced Ghostbusters VR Academy, a new, fully immersive training simulator broken up into two distinct games, set in the world of Ghostbusters. Published by SPVR and developed by HOLOGATE, Ghostbusters VR Academy will be available globally for HOLOGATE’s ARENA and BLITZ platforms at over 400 locations by the end of 2022.

“Sony Pictures Virtual Reality is all about making wishes come true. Ghostbusters VR Academy, the new location-based VR training experience, will continue to expand the world of Ghostbusters in a way that honors the legacy of the franchise and offers something entirely new,” says Jake Zim, Senior Vice President, Virtual Reality, Sony Pictures Entertainment. “For the first time ever, players will be able to train to be a real Ghostbuster in an amazing academy setting and race a new flying version of the ECTO using HOLOGATE’s vehicle motion simulator. This fantasy fulfilling experience is only possible in virtual reality and with HOLOGATE’s location-based entertainment technology.”

In the ARENA game, academy members in training will strap on their proton packs and work together as a team in high-risk ghost encounter scenarios – all under the safeguard of academy grounds.

In the BLITZ game, trainees will have the opportunity to take the wheel in the prototype ECTO vehicle, a vehicle exclusively available for evaluation at the academy. Players will compete to see who is the fastest, most skillful driver in a high-speed ghostly race, putting the prototype vehicle to the test and choosing if it is worth joining the ranks of future Ghostbusters equipment.

“Sony Pictures VR is doing incredible things for virtual reality, and we’re thrilled to collaborate for this new experience,” says Leif Petersen, CEO and HOLOGATE founder. “Ghostbusters VR Academy is a natural fit for HOLOGATE’s ARENA and BLITZ platforms. It transcends reality so players can create memorable moments while fulfilling longtime wishes to operate iconic Ghostbusters equipment. We can’t wait for players to step inside this world.”