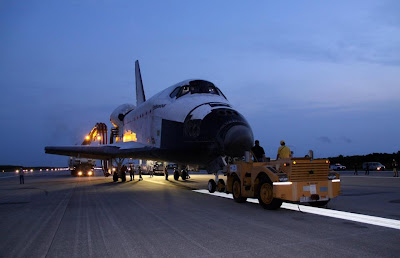 Endeavour, which will be transported on top of NASA’s Boeing 747 Shuttle Carrier Aircraft (SCA), is expected to arrive at LAX mid-day of September 20. The target date is flexible, pending weather conditions at Kennedy Space Center, along the flight path and in Los Angeles.

When Endeavour arrives, it will be removed from the SCA, placed on a special transportation system and moved into a United Airlines hangar. The shuttle will stay at the hangar while final preparations for its transport and display are completed.

Endeavour will leave LAX to begin its pre-positioning journey on the morning of October 12. It will be transported with a series of moves and stops that will occur as Endeavour goes under raised transmission lines and across the 405 Freeway to arrive at Inglewood City Hall for an official launch ceremony on the morning of October 13. It will then be transported to the intersection of Martin Luther King and Crenshaw Boulevards where a celebration of Mission 26 will be produced and directed by renowned actress and choreographer, Debbie Allen. This celebration will include over 200 artists featuring the Los Angeles School of Gymnastics, Lula Washington Dance Theatre, taiko drummers, aerialists, and more. Endeavour is expected to arrive at the California Science Center in Exposition Park that evening.

The two day journey of the five story tall (58 feet high at the tip of the tail), 78 feet wide, 170,000 pound Endeavour is expected to draw viewers from across Southern California. The route can be accessed on the California Science Center’s website at www.californiasciencecenter.org . The public is invited to serve as volunteers along the route. Those interested can sign up on the website as well.

“We look forward to everyone joining in the celebration as Endeavour travels from the United Airlines hangar to the California Science Center’s Samuel Oschin Space Shuttle Endeavour Display Pavilion,” said Rudolph. “This will mark the first, last and only time a space shuttle will travel through 12 miles of urban, public streets. It’s not only one of the biggest objects ever transported down city streets; it’s an irreplaceable national treasure. Most importantly, this marks the beginning of Endeavour’s ultimate mission of inspiring current and innovators and explorers at the California Science Center.”

“Los Angeles is a world class city that deserves an out-of-this-world attraction like the
Endeavour,” Mayor Villaraigosa said. “While we welcome the shuttle with open arms, we recognize the effect it will have on the surrounding communities, and are working hard to mitigate those impacts. It is a boon for the City’s economy and will serve as an inspiration for generations.”

Inglewood Mayor James T. Butts noted, “The procession of the Endeavor to its new home at the California Science Center will allow our children to bear witness to history, up close and personally. We are proud that the City of Inglewood will be involved in this great event.”

Don Wright, United Airlines Director of Technical Operations at LAX, noted, “As a proud partner of the California Science Center, we are pleased to host the Space Shuttle Endeavour at our facility. United Airlines co-workers are thrilled to be a part of this very exciting event for the Los Angeles community.”

Endeavour will open to the public to begin its enduring mission at the California Science Center on October 30, 2012. Rudolph advises those planning a visit to reserve timed-tickets in advance, in October before the shuttle’s arrival, on the Science Center’s website.

The Endeavour’s journey is made possible thanks to a team of engineers who donated hundreds of hours to take on the challenge of figuring out how to navigate Endeavour through the urban streets of Los Angeles and Inglewood, with minimal impact to the surroundings. Donations by AEG, Arup, Astrotech,AT&T, Boeing, Cordoba Corporation, David Evans and Associates, Earthquake Protection Systems, Energy Labs, DMG Corporation, Gibson Dunn and Crutcher, Jenkin/Gales and Martinez , Morley Builders,Parsons Corporation, Pratt & Whitney Rocketdyne, Psomas, Sarens Group, Southern California Edison,Time Warner Cable, Twining, Inc, United Airlines, Valley Crest and Zimmer Gunsul Frasca (ZGF) and the cities of Los Angeles and Inglewood will also support Endeavour’s Mission 26.

The Science Center has begun designing the Samuel Oschin Air and Space Center, Endeavour’s permanent home. With Endeavour as its centerpiece, the Samuel Oschin Air and Space Center will provide guests with opportunities to investigate atmospheric flight and the exploration of our universe. This new facility will be a launch pad for creativity and innovation by integrating hands-on exhibits with a unique collection of aircraft and spacecraft to encourage active learning and critical thinking.

Joe Kleimanhttp://wwww.themedreality.com
Raised in San Diego on theme parks, zoos, and IMAX films, Joe Kleiman would expand his childhood loves into two decades as a projectionist and theater director within the giant screen industry. In addition to his work in commercial and museum operations, Joe has volunteered his time to animal husbandry at leading facilities in California and Texas and has played a leading management role for a number of performing arts companies. Joe has been News Editor and contributing author to InPark Magazine since 2011. HIs writing has also appeared in Sound & Communications, LF Examiner, Jim Hill Media, and MiceChat. His blog, ThemedReality.com takes an unconventional look at the attractions industry. Follow on twitter @ThemesRenewed Joe lives in Sacramento, California with his fiancé, two dogs, and a ghost.
Share
Facebook
Twitter
Linkedin
Email
Print
WhatsApp
Pinterest
ReddIt
Tumblr
Previous articleCollison plc Constructs Unique Structure in Cardiff for Doctor Who Experience
Next articleNational Geographic’s "Flying Monsters 3D" Nominated for Two Jackson Hole Science Media Awards