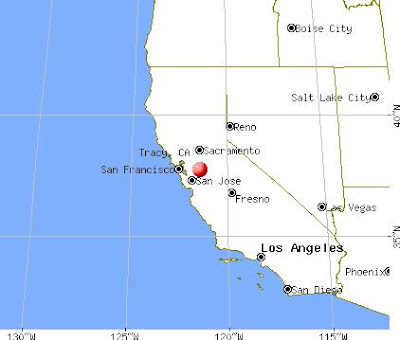 
“Tracy is giving a Los Gatos developer a shot to build a $1.2 billion tourist destination four times bigger than Disneyland.

“‘A lot of kids who go to college don’t come back,’ Rogers said. ”There’s nothing to do in Tracy, that’s the most common comment I’ve heard there.’

“‘Spirit of California will fix that’, he said. ‘Everything that happens in California can happen at this destination,’ he said. ‘And it’s going to be exciting and entertaining.’ The project originated in 2008 with the closure of the Altamont raceway. A couple of Tracy entrepreneurs approached the city about building a race track on Holly Sugar plant land the city bought after the plant closed in 2000.

“Rogers came aboard, saw Tracy’s connection to the Bay Area, even water access, and decided to proposed a vastly bigger project.

“‘Why don’t we expand the thing into a destination project and the synergy that’s created by having all these different venues makes all of them more successful than they’d be on their own?’ he said he reasoned.”

Joe Kleimanhttp://wwww.themedreality.com
Raised in San Diego on theme parks, zoos, and IMAX films, Joe Kleiman would expand his childhood loves into two decades as a projectionist and theater director within the giant screen industry. In addition to his work in commercial and museum operations, Joe has volunteered his time to animal husbandry at leading facilities in California and Texas and has played a leading management role for a number of performing arts companies. Joe has been News Editor and contributing author to InPark Magazine since 2011. HIs writing has also appeared in Sound & Communications, LF Examiner, Jim Hill Media, and MiceChat. His blog, ThemedReality.com takes an unconventional look at the attractions industry. Follow on twitter @ThemesRenewed Joe lives in Sacramento, California with his fiancé, two dogs, and a ghost.
Share
Facebook
Twitter
Linkedin
Email
Print
WhatsApp
Pinterest
ReddIt
Tumblr
Previous articleIn Motion Entertainment Creates Black Forest Experience for Busch Gardens’ VERBOLTEN
Next articleShuttle Update