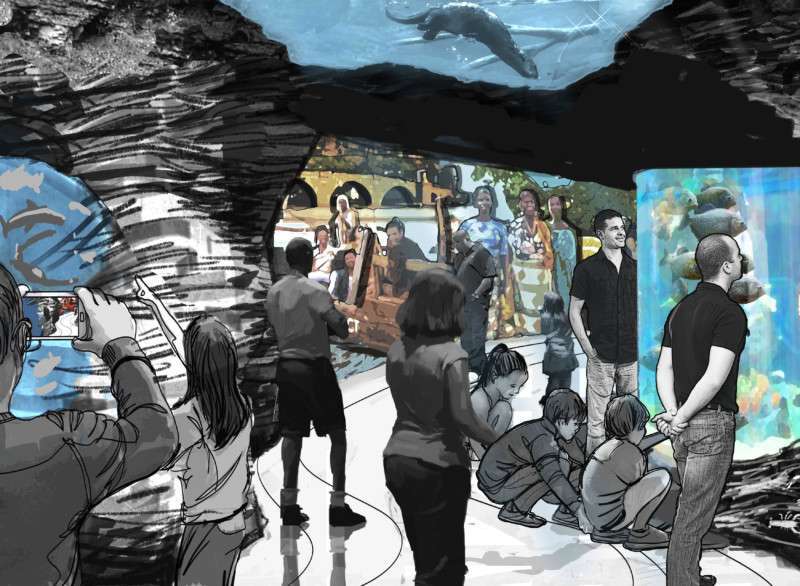 St. Louis’s PGAV Destinations has designed the new attraction and, once constructed, zoOceanarium Group will be the professional operators of the Aquarium. The St. Louis Aquarium at Union Station is the next phase of development at the National Historic Landmark train station in downtown St. Louis. It will be joined by an observation wheel and an outdoor park for entertainment and food and beverage services.

Completion of the aquarium is expected in summer 2019.

“We’re very excited to have the nation’s top construction and design firms working with us on this project,” said Bob O’Loughlin, Chairman and CEO of Lodging Hospitality Management (LHM). “The fact that both McCarthy and PGAV Destinations are based in St. Louis means that they appreciate the value of Union Station’s history and its importance to our community.”

“St. Louis Union Station is being recreated for the future. We’ve received a great reception to the first phase of our project remaking the hotel spaces and the Grand Hall and we know the opening of the St. Louis Aquarium and Wheel in 2019 will make Union Station a true destination hotel and entertainment complex,” said O’Loughlin. “Additionally, partnering with zoOceanarium Group as the operator of the aquarium brings a high level of professionalism to the project that will be appreciated by everyone who visits the new attraction.”

The 120,000-square-foot St. Louis Aquarium at Union Station will be located in the former mall area within St. Louis Union Station and will be entered from the station’s south plaza. The aquarium attraction will feature one-of-a-kind exhibits and tanks with 1,300,000 gallons of water housing thousands of aquatic animals from the rivers and oceans of the world.

Not only will the Aquarium serve as a unique leisure and entertainment destination for St. Louis, the construction of this project will create 500 jobs and once operational, it will bring more than 100 permanent jobs to the downtown area.

“We want to thank LHM for their investment in our community. Everyone at McCarthy and staff who will work on the project are all very excited,” said Ryan Freeman, Vice President of Operations at McCarthy.

“The St. Louis Aquarium at Union Station is an important and challenging project for the region.  Building this aquarium, which is extremely complex construction, inside of the historic train shed is unique in its array of complexities.  Having been headquartered here for the past 100 years, we’ve been able to build some of the most challenging projects around the region and we’re pleased to be a part of adding this exciting new landmark,” said Freeman. “Our team is focused on delivering a quality aquarium experience that will delight and enchant visitors while ensuring the optimum aquatic environment where fish will live and thrive.  As St. Louis is our hometown, this project has special significance because not only will we build it – we will be bringing our own families to visit the aquarium when it is finished; there is a special sense of pride that goes along with that.”

McCarthy Building Companies, Inc. is the oldest privately held national construction company in the country – with more than 150 years spent collaborating with partners to solve complex building challenges on behalf of its clients. With an unrelenting focus on safety and a comprehensive quality program that span all phases of every project, McCarthy utilizes industry-leading design phase and construction techniques combined with value-add technology to maximize outcomes. Repeatedly honored as a Best Place to Work and Healthiest Employer, McCarthy is ranked the 15th largest domestic general contractor (Engineering News-Record, May 2017). McCarthy is 100 percent employee owned.

Once constructed, the aquarium will be operated by zoOceanarium Group, one of the world’s leading development and operations companies for wildlife-focused science centers, public aquariums and zoos. Setting high standards for animal care and welfare, zoOceanarium Group is involved in numerous wildlife conservation organizations, including the World Association of Zoos and Aquariums (WAZA) and the Association of Zoos and Aquariums (AZA). The company adheres to the highest standards of animal care, conservation, education and guest experiences.”Guests will be thrilled by this new aquarium, which will feature amazing animals and an experience that is not only fun, but inspiring,” said Chris Davis, Managing Partner for zoOceanarium Group LLC. “We are excited to partner with LHM in developing this next generation of wildlife education and entertainment experience that is sure to be a national attraction. The St. Louis Aquarium at Union Station is a highly interactive and immersive experience, connecting guests of all ages to nature in ways that respect the animals. The welfare of every animal is our priority.”

The zoOceanarium Group specializes in developing and operating a new generation of aquarium and zoological facilities that emphasize excellent animal care and wellbeing and that create unique opportunities for people to appreciate and learn about animals through once-in-a-lifetime-experiences. With more than 20 years of successes, zoOceanarium Group offers expertise from concept design through animal collection planning and facility operations and management. Its animal care specialists, designers, project managers and business managers are committed to the care for, and conservation of, wildlife globally. Company offices are located in Dubai, Singapore and the United States.

The St Louis Aquarium at Union Station will work in partnership with St Louis Aquarium at Union Station Foundation, a 501C3 independent tax exempt non-profit organization. The mission of the Foundation is to educate about aquatic life and promote the importance of conservation. The Foundation is committed to Access for All, an initiative to ensure that all children, regardless of ability, background, socioeconomic status or special needs have opportunities to experience the aquarium. Through Access for All, the aquarium provides field trips for Title 1 Schools where there are a high percentage of students living in poverty. This will allow students to attend field trips to the aquarium at no charge.

The St. Louis Aquarium at Union Station will seek to be an accredited member of the Association of Zoos and Aquariums (AZA) which holds members to the highest standards in animal care and exhibition. The facility will employ an animal husbandry team of marine biologists and aquarists responsible for the long-term care of the animals in the exhibit as well as overseeing water chemistry, animal nutrition, veterinary care, education, staffing and safety.

The attraction will be open 365 days a year from 9 a.m. to 7 p.m. One million visitors are expected annually. School groups will be provided an exceptional educational experience and the Aquarium will be a major entertainment destination for local and out-of-town visitors. The Aquarium will also be available for private events including weddings, social events and corporate parties.

PGAV Destinations, designer of the aquarium, has been involved in the design of exhibits at many of the nation’s top aquatic attractions, including the Georgia Aquarium, South Carolina Aquarium, Discovery Cove and SeaWorld Parks and Entertainment. The company – which specializes in designing attractions, exhibits and experiences that enrich lives and create memories for guests – also has designed environments at the Saint Louis Zoo, such as Polar Bear Point, Sea Lion Sound, Penguin & Puffin Coast and the new Grizzly Ridge. Their work can be enjoyed at a variety of other popular visitor experiences for clients including Delaware North Companies, The Biltmore Company, Bass Pro Shops, Ameristar Casinos, Universal Studios, The Gettysburg Foundation and many others. Recent assignments include planning and design at many of the world’s “must see” destinations, including the Grand Canyon, Biltmore Estate, Space Shuttle Atlantis, Chimelong Ocean Kingdom and the Hoover Dam.

“We like to think outside the box, dream big and bring our clients’ hopes and dreams into reality,” said PGAV Destinations’ lead aquarium designer Emily Howard, Vice President. “The aquarium will be something unique to our city and Union Station’s spectacular architecture and environment will make this project even more special.”
PGAV Destinations is a global leader in the planning and design of unique destinations. Now entering its sixth decade, the practice has evolved to become the ideal destination-consulting partner, skilled at developing growth-oriented master plans and translating those plans into successful projects. No other firm offers such an integrated approach to destination planning.

The St. Louis Aquarium at Union Station will be part of a $160 million family entertainment complex planned for St. Louis Union Station. Other components will include the previously announced St Louis Wheel. Wheel passengers will take three to four rotations high over the St. Louis skyline during the 10-to-12-minute ride. Located on the south side of the historic train shed. The St. Louis Wheel will be a new iconic attraction on the St. Louis skyline and will be operational every day of the year, accommodating an estimated 500,000 visitors annually.

Other phases of the entertainment complex at St. Louis Union Station are underway in an area beneath the historic train shed. The first phase of development – the Fire & Light Show at the Lake – opened in November 2016. The show emanates from nine fire pods submerged in the watery pool. Tube lights, hung from trees around the Lake create a display synchronized to music on view every hour on the hour, 5 pm – 9 pm each evening.

A new boardwalk was recently added around the train shed lake allowing guests to stroll completely around the water and connect to both the Hard Rock Café and Landry’s restaurants. The Park and Fire & Light Show have been designed by Groundswell Design of Philadelphia.

Enhancements also are continuing at the St. Louis Union Station Hotel which is adding 28 new hotel rooms beneath the clock tower section on the Market Street side of the building’s northeast corner. Construction on the rooms began in September 2017 with completion by January 2018. The hotel currently offers 539 rooms and will increase to 567 rooms when the $6 million project is completed.

Joe Kleimanhttp://wwww.themedreality.com
Raised in San Diego on theme parks, zoos, and IMAX films, InPark's Senior Correspondent Joe Kleiman would expand his childhood loves into two decades as a projectionist and theater director within the giant screen industry. In addition to his work in commercial and museum operations, Joe has volunteered his time to animal husbandry at leading facilities in California and Texas and has played a leading management role for a number of performing arts companies. Joe previously served as News Editor and has remained a contributing author to InPark Magazine since 2011. HIs writing has also appeared in Sound & Communications, LF Examiner, Jim Hill Media, The Planetarian, Behind the Thrills, and MiceChat His blog, ThemedReality.com takes an unconventional look at the attractions industry. Follow on twitter @ThemesRenewed Joe lives in Sacramento, California with his wife, dog, and a ghost.
Share
Facebook
Twitter
Linkedin
Email
Print
WhatsApp
Pinterest
ReddIt
Tumblr
Previous articleSeaWorld Orlando Announces 2018 Events
Next articleJonathan Casson Joins The Producers Group While Tom Mehrmann Departs to Oversee Universal Beijing