Tales from IAAPA 2012 in Orlando 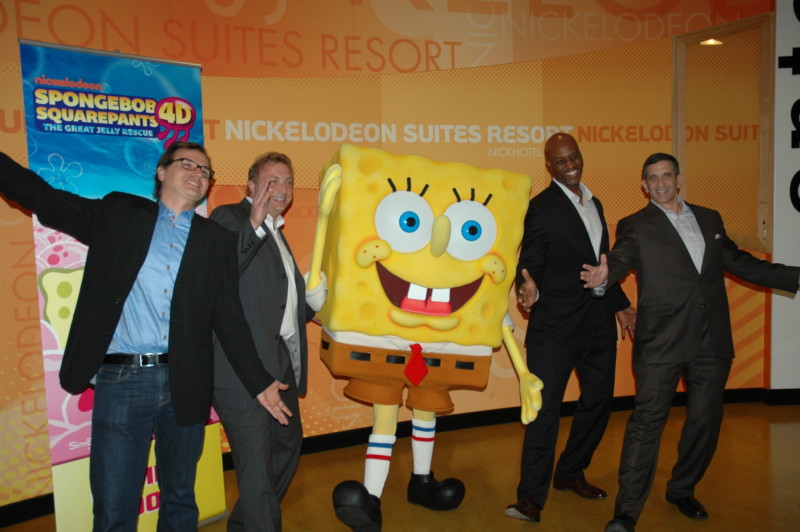 SpongeBob struts his stuff in 3D/4D

InPark Magazine recently had the honor of meeting SpongeBob SquarePants in person at his Orlando headquarters, the Nickelodeon Suites Resort. The occasion: an official announcement of the new show, “SpongeBob SquarePants 4D: The Great Jelly Rescue,” set to premiere in early 2013 at the Nick Suites, and then be rolled out to 4D theaters at theme parks, zoos, aquariums and other family-friendly settings worldwide.

“The Great Jelly Rescue” adventure follows the 2005 production, “SpongeBob SquarePants 4D” and will join Nickelodeon’s brand power and popular characters to SimEx-Iwerks’ 4D theater circuit and distribution network. The 7-year run of the first show is a testament to SpongeBob’s huge, global popularity – and also a solid reminder that a good attraction movie can be evergreen, playing successfully year after year onscreen in special venue theaters, in stark contrast to the ephemeral theatrical runs of today’s mainstream productions.

“The Great Jelly Rescue” promises to deliver SpongeBob SquarePants just as audiences love him while making the most of advancements in rendering and immersive 4D theater technology – most notably, enhanced stereoscopic 3D backgrounds and alternate storylines, along with a host of in-theater effects such as wind, bubbles, snow, seat buzzers, leg ticklers, special lighting and audio. Some of the scenes will change from show to show, along with their corresponding effects – providing incentive for visitors to repeat the experience.

Asked about the challenge of making the new 3D SpongeBob as authentic and convincing as possible, Brent Young of Super 78 said, “We needed to go the extra 10 miles to show this property can be dimensionalized while honoring the brand. In 3D, it’s harder to pull some things off convincingly. But we were well prepared, having gone through a similar process when we produced the media for ‘Dora & Diego’s 4D Adventure’ [2010] in a similar collaboration with Nickelodeon and SimEx-Iwerks. Stephen Hillenburg, SpongeBob’s creator, has the ultimate authority, and we were thrilled by his approval.”

SpongeBob SquarePants’s journey through animation formats is set to continue, in the form of “It’s a SpongeBob Christmas,” airing on CBS and Nickelodeon television in December, using classic stop-motion animation created with models and miniatures. There’s also talk of perpetuating the 3D stereoscopy in the next SpongeBob feature film, planned for 2015. When asked about the possibility of a SpongeBob SquarePants 3D TV series, Nickelodeon’s Gerald Raines was mum. But he did assure us that more Nickelodeon brands will be seen making their way into the attractions world, following on the footsteps of Dora, Diego and SpongeBob, with hints of a renewed focus on slime. – J.R.

Officials from the planned Russia Park presented at IAAPA 2012 their plans for a 2,500-acre park scheduled for opening in 2018. Shaped like a miniature Russian Federation, the planned park, located 18 miles south of Moscow and near the airport, is expected to have over 10 million visitors per year. It is being designed as a public/private partnership with the hopes of encouraging cultural exchange within the regions of Russia and also throughout the world.

The park is designed to have several distinct components. Theme park “Russia” will represent all regions within Russia and function much like an expo.

An amusement park will house rides and attractions in four themed areas: Ancient Russia, Czarist Russia, Socialist Russia and New Russia. The park will be designed for year-round operation including both summer and winter amusements, with a stated goal of having 70% of attractions available all year.

A safari park will house 1,300 kinds of animals found within Russia’s borders and accommodate year-round visits.

A presidential Botanical Garden will feature over 10,000 species of plants in both indoor and outdoor settings.

Supporting architecture for the project will include hotels, restaurants featuring Russian cuisine, nightlife, shopping and a convention center.

The plan is to open an international architectural tender in the first three quarters of 2013. In quarters three and four, bidding will begin for rights to the project, with the expectation of signing contracts before the start of 2014. Construction is planned for 2015-2020, with phased openings starting in 2018, and complete operation in 2020.

Some attendees seemed skeptical of the plans, with progress on the previously announced Magic World Russia moving along slowly. AECOM is currently performing a feasibility study for Magic World Russia, designed by Gary Goddard Entertainment.

Since IAAPA, news stories have surfaced that Moscow authorities have approved development of another theme park “Galaktika Park” outside of Moscow, that will include an indoor Universal Studios Park. – M.P.

The 19th Annual Thea Award recipients were announced at the TEA booth at the IAAPA Attractions Expo 2012.    The Thea Awards, recognizing the best in themed entertainment design, will be awarded in Anaheim, CA, USA on April 6, 2013.

A thrilling race through the world of the Disney∙Pixar film Cars. In bringing a well-known movie to life, the designers went the extra step in expanding it into a fully experiential world.

An immersive, next-generation thrill ride that blurs the line between fiction and reality. The seamless combination of show systems pushes the boundaries of 3D realism.

The sensitive layout, sophisticated use of scale, character details and high-quality execution combine to make this an outstanding example of experiential design and a destination in its own right.

Virtually every storytelling device is used in this massive, multi-level exhibition that is never repetitive or derivative. Visitors are immersed in a complete Canadian sports experience.

Aquanura adapts available technology and puts it to use in ways that are uniquely evocative. Artistry and beauty prevail over spectacle, bringing emotionally engaging stories to life.

This unique project has added a new dimension to the genre of the multimedia water spectacular and will remain as a permanent icon and legacy of the 2012 world’s fair.

Combining readily available components with a unique LED tablet, this new technology transformed the 2012 Olympics opening ceremony into a huge video display mapped to the space inhabited by the audience.

Everything that is done with the Harry Potter brand faces high expectations from fans all over the world. The Making of Harry Potter Studio Tour has managed to more than fulfill those expectations.

Aulani represents a major departure from traditional Disney resorts in that, rather than providing lodging in support of a theme park, the resort itself is the destination.

The restaurant resides within a reproduction of the famous Carthay Circle Theatre, renowned in Disney history as the venue for the premiere of Snow White and the Seven Dwarfs in 1937.

“Perhaps no one has had more impact on the two biggest players in our business – Disney and Universal – than Frank Stanek has had – especially in the growth and development of the industry in the international marketplace.” — Marty Sklar

By alternating innovation and adaptation, applying the world’s best practices together with their own brand of creativity, the Mack family has grown Europa-Park into one of the most important theme parks in the world.

Judith Rubin
Judith Rubin ([email protected]) is a leading journalist, publicist, strategist, blogger, content marketing specialist and connector in the international attractions industry. She excels at writing about all aspects of design and technical design, production and project management. Areas of special interest include AV integration and show control, lighting design and acoustics, specialty cinema, digital video and world’s fairs. Judith has ties to numerous industry organizations. From 2005-2020 she ran communications, publications and social media for the Themed Entertainment Association (TEA). In 2013, she was honored with the TEA Service Award. She was development director of IMERSA, and co-chair of the 2014 IMERSA Summit. She was publicist for the Large Format Cinema Association in the 1990s, now part of the Giant Screen Cinema Association (GSCA) and has also contributed to the publications of PLASA, IAAPA and the International Planetarium Society. Already making her mark as a magazine and book editor, Judith joined World’s Fair magazine in 1987, which introduced her to the attractions industry. Launching as a freelancer in the mid 1990s she has contributed to dozens of publications and media outlets including Funworld, Lighting&Sound America, Sound & Communications, Urban Land, The Raconteur and The Planetarian. She joined InPark in 2010. Judith earned a Bachelor of Fine Arts from Pratt Institute. She has lived in New York City and the San Francisco Bay Area, and now makes her home in Saint Louis, where she is active in the local arts and theater community.
Share
Facebook
Twitter
Linkedin
Email
Print
WhatsApp
Pinterest
ReddIt
Tumblr
Previous articlearound the world: Walt Disney World opens new attractions across its Orlando property
Next articleThemed Attractions Malaysia joins popular parks and brands