Kazakhstan hosts a world’s fair in 2017 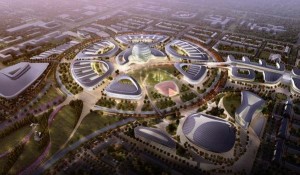 [dropcap color=”#888″ type=”square”]A[/dropcap]stana, Kazakhstan: Construction of buildings for the 2017 world expo began in April 2014: 38 new buildings will be erected specifically for the event, with 20 companies from Kazakhstan and 49 companies from around the globe already involved. Ultimately, Astana Expo 2017 anticipates the participation of some 100 countries and 10 international organizations, and some 3 million visits. The 427-acre site is located near Nazarbayev University and following the current practice of residual post-use planning for Expo sites, will become the nucleus of a research hub after closing day.

Chicago-based Adrian Smith+Gordon Gill Architecture was selected in October 2013 (beating out 47 competitors) as the architects of the Expo 2017 site. Chairman of the Expo Technical Committee Jeremy Rifkin, an economist and social theorist and the originator of the term “third industrial revolution,” cited the AS+GG design as being the most practical in terms of sustainable development, artistic design and post-Expo use. No buildings in the design will need to be destroyed after the exhibition, a key point for the contest’s judges.

Expo 2017 will be the first world’s fair hosted by a country from the former Soviet Union. Its theme is “Future Energy,” sparks the realization that energy has not been the theme of a world’s fair since Knoxville Expo 82. It’s high time to revisit the topic in this global forum.

In keeping with the theme, organizers promise a sustainable Expo site in terms of architecture, technology, energy efficiency programs, water storage and recycling. The Expo will be powered by renewable energies such as solar, wind, biomass, hydropower and geothermal energy.  According to project designers, all the energy consumed by visitors to the expo will be generated by renewable sources. The buildings themselves will be power plants that collect and use solar and wind energy and store heat underground. The area’s north-south orientation will maximize the passive collection of solar power.

Aidar Marat, general manager of the Department of Architecture and Design of the Astana Expo 2017 Company, and Assel Kozhakova, Director of Marketing and Promotion for the Expo, have described the site. It will be in the shape of a drop of water with pavilions at the center forming the shape of a wind turbine.  The plan includes a 62-acre exhibition area with the spherical Kazakhstan pavilion as its centerpiece, surrounded by the International, Thematic and Corporate pavilions. About half of the exhibition grounds will be set aside for pavilions, and the remaining area will accommodate a variety of open and semi-enclosed areas. Astana will celebrate the diversity of the participating countries on the Expo grounds and in the city itself with a series of large-scale shows, theme parties, festivals, performing arts, concerts, art exhibitions, theater performances and other shows.

Astana had been competing with the city of Liege, Belgium for the privilege of hosting the 2017 expo, and was selected over Liege on November 22, 2012 by the Bureau of International Expositions (BIE).  Astana is classified by the BIE as a Recognized Exhibition, which is smaller in size and shorter in duration than a Registered Exhibition (the Milan Expo is to run for 6 months, while Astana’s will run for 3 months). A Recognized exposition calls for the organizers to provide the buildings that house the international participants – as opposed to exhibitors designing and constructing their own pavilions, which is the practice for a Registered event.

James Ogul will follow development of the Astana world’s fair for InPark Magazine, with a special focus on the US presence should the US decide to participate. (The US State Department, which has responsibility for US participation in overseas Expos, is studying the possibility.)

Judith Rubin
Judith Rubin ([email protected]) is a leading journalist, publicist, strategist, blogger, content marketing specialist and connector in the international attractions industry. She excels at writing about all aspects of design and technical design, production and project management. Areas of special interest include AV integration and show control, lighting design and acoustics, specialty cinema, digital video and world’s fairs. Judith has ties to numerous industry organizations. From 2005-2020 she ran communications, publications and social media for the Themed Entertainment Association (TEA). In 2013, she was honored with the TEA Service Award. She was development director of IMERSA, and co-chair of the 2014 IMERSA Summit. She was publicist for the Large Format Cinema Association in the 1990s, now part of the Giant Screen Cinema Association (GSCA) and has also contributed to the publications of PLASA, IAAPA and the International Planetarium Society. Already making her mark as a magazine and book editor, Judith joined World’s Fair magazine in 1987, which introduced her to the attractions industry. Launching as a freelancer in the mid 1990s she has contributed to dozens of publications and media outlets including Funworld, Lighting&Sound America, Sound & Communications, Urban Land, The Raconteur and The Planetarian. She joined InPark in 2010. Judith earned a Bachelor of Fine Arts from Pratt Institute. She has lived in New York City and the San Francisco Bay Area, and now makes her home in Saint Louis, where she is active in the local arts and theater community.
Share
Facebook
Twitter
Linkedin
Email
Print
WhatsApp
Pinterest
ReddIt
Tumblr
Previous articleCalibre Introduces Newest LED Videowall Optimised Image Scaler
Next articleChristie Set to Install 100th Vive Audio Cinema Sound System Within First Year of Product’s Introduction