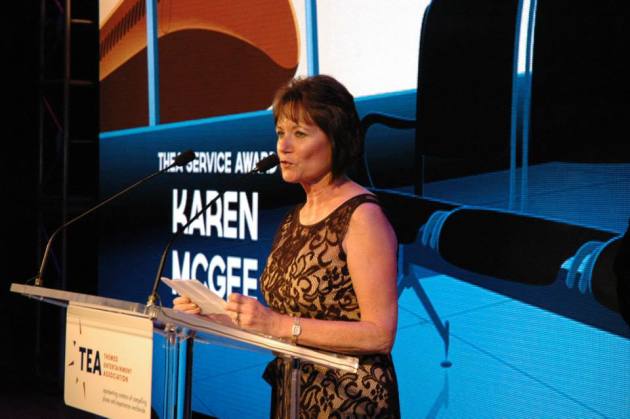 Burbank, CA, USA — The TEA Past Presidents Committee is soliciting nominations from the membership for the 2014 TEA Distinguished Service Award that will be presented at the 2015 Thea Gala on March 21, 2015

A description of the Award, the selection process, criteria, and nomination process is quite simple and the TEA encourages your participation.

The TEA Distinguished Service Award Recognizes outstanding contributions made to the Themed Entertainment Association, by TEA members who have supported the Association above and beyond the call of duty.

The TEA Distinguished Service Award will be presented annually by a representative(s) from the TEA Past Presidents Committee, at the Thea Awards ceremonies, in recognition of a TEA member’s outstanding contributions “above & beyond the call of duty” to the Themed Entertainment Association. Similar to the THEA Awards, nominations are open to the TEA membership, based upon published criteria.  The final selection of one annual recipient will be made by members of the TEA Past President’s Advisory Committee and approved by the TEA International Board of Directors.

Recipients of the TEA Distinguished Service Award will be presented with an award plaque acknowledging their service to the TEA during the THEA Awards and their name/date will be placed on a perpetual plaque maintained at the Association’s principle offices.

With the exception of those who are currently serving on TEA International and Division Boards during the calendar year prior to THEA Awards Gala, all TEA members in good standing are eligible for consideration.  For 2014, the nominating form will be distributed to the general membership in Mid-December 2014 and all nominations must be submitted on or before January 16, 2015.

Nominations will be accepted from any current member of the TEA. The Past Presidents Advisory Committee will collect and review all nominations and by vote of the majority, will make its recommendation to the International Board (IB) no later than January 23. The IB will review the selected nomination in Executive Session and act on the nomination by January 23, 2015.  If for any reason, the IB rejects the candidate, the Past Presidents’ Committee will submit an alternate candidate within one week of the IB decision.  If that candidate is not approved, there will be no Service Award recipient for this year.

Once the IB approves the nomination, the President of the IB or their designated agent, will formally notify the candidate in a timely manner.  Acceptance is predicated on the candidate’s ability to attend the Thea Awards ceremony.

–Be a TEA member in good standing.
–Not currently on the IB or Division Boards.
–Have been active in the industry for a minimum of five years.
–Have made demonstrable and outstanding contributions to the mission of the Association that is “above and beyond the call of duty.”
–Be available to accept the Award at the 2015 Thea Awards Gala,  March 21, 2015.

Nominating Information to be submitted to the TEA Past Presidents Committee:

–Name and contact information for your Nominee
–A short statement of your reasons for making the nomination
–Your contact information and date
–Nominations should be sent via email or snail mail – please note Service Award Nomination in the email subject line or on the envelope Past President, Monty Lunde  [email protected]

Joe Kleimanhttp://wwww.themedreality.com
Raised in San Diego on theme parks, zoos, and IMAX films, InPark's Senior Correspondent Joe Kleiman would expand his childhood loves into two decades as a projectionist and theater director within the giant screen industry. In addition to his work in commercial and museum operations, Joe has volunteered his time to animal husbandry at leading facilities in California and Texas and has played a leading management role for a number of performing arts companies. Joe previously served as News Editor and has remained a contributing author to InPark Magazine since 2011. HIs writing has also appeared in Sound & Communications, LF Examiner, Jim Hill Media, The Planetarian, Behind the Thrills, and MiceChat His blog, ThemedReality.com takes an unconventional look at the attractions industry. Follow on twitter @ThemesRenewed Joe lives in Sacramento, California with his wife, dog, and a ghost.
Share
Facebook
Twitter
Linkedin
Email
Print
WhatsApp
Pinterest
ReddIt
Tumblr
Previous articleWinners Announced for 11th Annual LA 3-D Movie Festival
Next articleElectrosonic Takes on Challenge of Rubik’s Cube