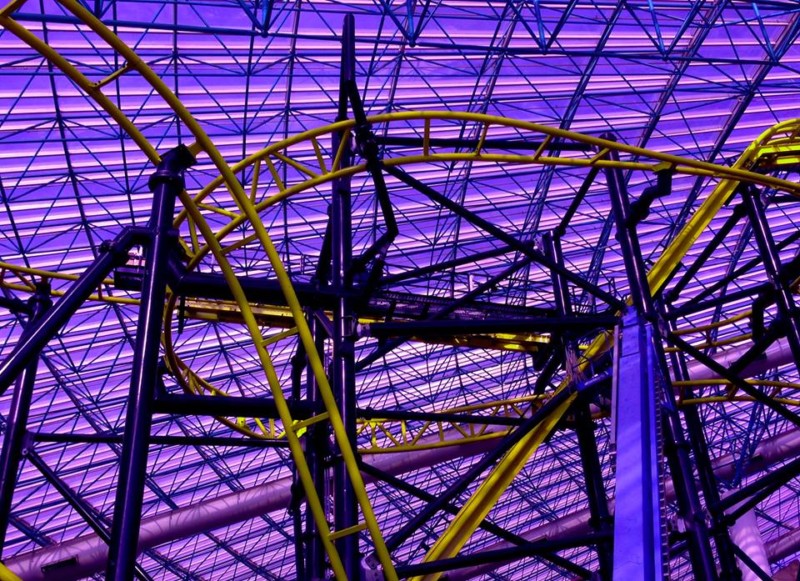 Las Vegas, NV, USA (December 10, 2013) — El Loco is coming. Las Vegas’ newest roller coaster, only the second of its kind in the U.S., will offer screams and thrills at The Adventuredome at Circus Circus Las Vegas beginning in late January 2014.  As construction continues, the coaster cars that will soon speed around 1,300 feet of electric yellow track have started to arrive.

The final piece of the track will be laid this week and one coaster car is now on display at the indoor theme park, providing a sneak peek to those anxiously awaiting their turn to experience the coaster’s negative G drops, gravity-defying turns and over-the-edge twists. The open–carriage cars, each accommodating only four passengers, are smaller than average, allowing the vehicle to make tighter, faster turns. The coaster’s unusual turns that tilt outward combined with the open cars create an exhilarating sensation.

Accompanied by a customized soundtrack, El Loco’s unique elements will provide guests with a 72-second, adrenaline-pumping adventure, including:

With its heart-racing drops, turns and twists, El Loco must undergo more than 2,000 safety test rides before any rider can board. “As with all our rides, safety is our number one concern,” said Tom Nolan, vice president of operations for The Adventuredome. “El Loco has a number of unique elements that make it a thrill-a-second ride, and this extensive testing process will ensure that every rider has a safe and fun experience.”

Designed by S&S Worldwide, Inc., one of the world’s leading manufacturers of vertical and family thrill rides, El Loco pushes the limits, allowing riders to enjoy movements never before experienced.

Joe Kleimanhttp://wwww.themedreality.com
Raised in San Diego on theme parks, zoos, and IMAX films, InPark's Senior Correspondent Joe Kleiman would expand his childhood loves into two decades as a projectionist and theater director within the giant screen industry. In addition to his work in commercial and museum operations, Joe has volunteered his time to animal husbandry at leading facilities in California and Texas and has played a leading management role for a number of performing arts companies. Joe previously served as News Editor and has remained a contributing author to InPark Magazine since 2011. HIs writing has also appeared in Sound & Communications, LF Examiner, Jim Hill Media, The Planetarian, Behind the Thrills, and MiceChat His blog, ThemedReality.com takes an unconventional look at the attractions industry. Follow on twitter @ThemesRenewed Joe lives in Sacramento, California with his wife, dog, and a ghost.
Share
Facebook
Twitter
Linkedin
Email
Print
WhatsApp
Pinterest
ReddIt
Tumblr
Previous articleCatherine Wilson Horne Named New President and CEO of Charlotte’s Discovery Place
Next articleScott Lobaugh Promoted to Director of Business Solutions for Gateway Ticketing