The Governor, the Ark, and the Abandoned Park 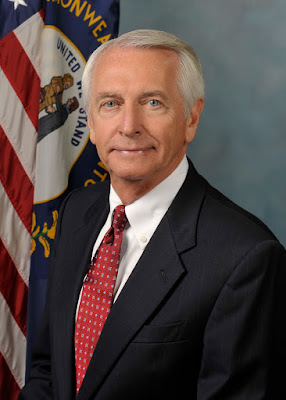 Louisville, KY (September 5, 2012) — Governor Steve Beshear of Kentucky believes that tourism brings jobs and profits, especially in a tough economy. According to the Governor’s office, tourism contributed $11.7 billion to the state’s economy in 2007.  Over the past couple of weeks, as an advocate of tourism, Beshear has been present for the start of two major projects.

On August 22, he launched the Trail Towns Program, designed to spur tourism and economic growth in small towns.  According to the Governor: “Trail Towns is a designation and assistance program that will help these communities connect the dots for travelers and guide them to trails, food, lodging, campgrounds, museums, entertainment and other services. The Trail Towns program will become a major part of our adventure tourism effort and will help communities improve their tourism economy. This will mean more jobs and businesses for small communities and more tourism opportunities for the entire state.”

Six days later, Beshear attended the groundbreaking for a new $4 million dollar visitor center at the Wild Turkey distillery in Lawrence.  (Another bourbon-themed attraction, the Jim Beam New American Stillhouse, designed by Jack Rouse Associates, is scheduled to open October 3).  In addition to tax incentives for new construction at the distillery, the state is offering a $1 million tax incentive per year for up to 10 years for the visitor center’s operation.

Tourism tax incentives are one of Beshear’s favorite tools.  He told the Louisville Courier-Journal, “. . . the great thing about them is they’re performance based. … I think I like that kind of approach.”  But the Governor’s insistence on using tax credits to promote tourism growth has created national debate with regard to the state’s two theme park projects (a third park, Beech Bend, in Bowling Green remains in operation and has seen an increase in attendance this year) and, as they currently stand, both are at risk of being abandoned. 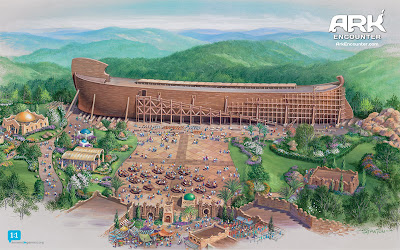 On December 1, 2010, Governor Beshear announced the $150 million Ark Encounter theme park, to be built in Grant County, in the northern part of the state and around 40 miles south of Ohio’s Kings Island theme park.  The centerpiece of Ark Encounter, being developed by Answers in Genesis, operators of the nearby Creation Museum, is slated to be a 500′ by 70′ recreation of Noah’s ark.

The numbers given by the developers and the Governor showed potential justification for the new project: 900 full and part-time jobs, 1.6 million visitors its first year, $214 million economic impact its first year of operation, and $250 million by the fifth year.  The Governor offered $37.5 million in tax incentives and $11 million in utlility and road infrastructure.  In May, 2011, the tax incentives had increased to $43 million and by March of this year, $2 million had already been allocated towards a new interchange off Interstate 75.

However, nothing has happened with the park, which was scheduled to begin construction this year for a 2014 opening.  Tax incentives, as laid out by state law, are not loans, but rather are based upon the receiving party having raised the capital needed for a project and meeting certain profit goals during operation.  According to The Guardian, Answers in Genesis has raised less than $24 million towards the project’s construction.

A number of issues have arisen over the tax incentives being offered for Ark Encounter.  There is the question of separation of church and state, especially since this project has religious leanings.  There is also the issue of offering such huge incentives at a time when, in the same state budget that saw approval of these particular incentives, state education funding was cut 6.4 percent and State Police and other agencies 2.2 percent. 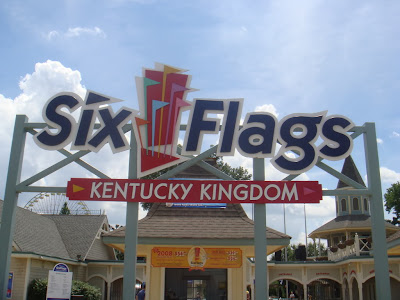 Ten months before he announced Ark Encounter, Kentucky lost a park that had been in operation since 1987.  The operator of that park made the following statement on February 4, 2010: “Six Flags announced today that it has decided to reject its lease with the Kentucky State Fair Board relating to the Kentucky Kingdom park . . . The current lease was simply not sustainable in the current economic environment. The rent was way too high, making it extremely difficult for the park to achieve profitability year in and year out. Six Flags was hopeful that a deal could be reached with the State Fair Board to re-negotiate the lease price to keep the park open but the State Fair Board wouldn’t budge. Therefore, we decided to reject the lease and cease operations.”

In late 2010, a team of investors led by Ed Hart, former owner of Kentucky Kingdom, made a proposal to reopen the park, which is located on fairground property owned by the state.  In September 2011, the State Fair Board, which reports directly to the Governor, rejected the offer for reasons unknown.  Hart’s group, known as the Kentucky Kingdom Redevelopment Company, stated on its website: “The failure to reach agreement with the city, state, and Fair Board is indeed puzzling.”

In February 2012, the Koch family, owners of Holiday World, formed a new company and approached the Fair Board about reopening the park in 2013 under the new name Bluegrass Boardwalk.  On February 23, the State Fair Board unanimously voted to approve a lease to the Koch’s, who had agreed to invest $15 to 20 million in the park in preparation for its reopening.

In May, the Koch’s announced that the park’s reopening would need to be delayed a year until 2014 due to the lack of maintenance and deterioration of the rides and structures, especially during winter months.  In June, the family opted out of the project and terminated the proposed lease.  Natalie Koch stated, “It’s hard to walk away from what we believed was a winning partnership for Kentucky and our team. But at the end of the day, the terms of the project did not fit our business model. It was time to withdraw.”

On August 15, Hart’s group presented a revised $40 million proposal to the Fair Board which would schedule the park for reopening in 2014.  One day later, instead of reviewing the documentation from Hart’s group, the Board, at the direction of the Governor, publicly issued a request for proposals from all parties interested in operating the park, with a decision to be made within 60 days.  If a suitable deal cannot be made, the Governor is considering demolishment of the park.

One point of contention between Hart’s group and the Governor is that the $40 million proposed by Hart’s group comprises $10 million in capital and a $30 million loan to be guaranteed by the state, which owns the property and everything occupying it.  Beshear has expressed very strong concerns about this proposal, telling the Courier-Journal: “I don’t know how interested the taxpayers would be in the state taking that kind of risk.”  But he has mentioned that he would consider the plan using a different model – tourism tax incentives.

Joe Kleimanhttp://wwww.themedreality.com
Raised in San Diego on theme parks, zoos, and IMAX films, InPark's Senior Correspondent Joe Kleiman would expand his childhood loves into two decades as a projectionist and theater director within the giant screen industry. In addition to his work in commercial and museum operations, Joe has volunteered his time to animal husbandry at leading facilities in California and Texas and has played a leading management role for a number of performing arts companies. Joe previously served as News Editor and has remained a contributing author to InPark Magazine since 2011. HIs writing has also appeared in Sound & Communications, LF Examiner, Jim Hill Media, The Planetarian, Behind the Thrills, and MiceChat His blog, ThemedReality.com takes an unconventional look at the attractions industry. Follow on twitter @ThemesRenewed Joe lives in Sacramento, California with his wife, dog, and a ghost.
Share
Facebook
Twitter
Linkedin
Email
Print
WhatsApp
Pinterest
ReddIt
Tumblr
Previous articleJoe Rohde: Artist, Adventurer, Conservationist, Imagineer – and co-chair of SATE 2012 design conference 19-21 Sept at Disneyland Paris
Next articleAAM Officially Becomes American Alliance of Museums; Establishes Policy Changes