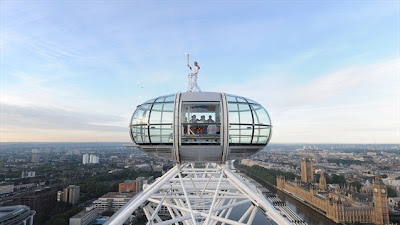 London, UK — The London Organising Committee of the Olympic and Paralympic Games (LOCOG) confirmed arrangements for the Olympic Flame’s final journey down the River Thames on Friday 27 July and a selection of highlights for its seven-day journey around the capital.

Having visited over 1,000 communities around the UK and celebrated the achievements of over 7,000 Torchbearers to date, the Olympic Torch Relay – presented by Coca-Cola, Lloyds TSB and Samsung will see the Flame carried by 982 Torchbearers around 200 miles of the capital’s streets, taking in landmarks, community spaces and places to showcase London and Londoners to the world.

Sebastian Coe, Chair of LOCOG said: ‘Thank you to everyone who has cheered on the Torchbearers right around the UK and helped to build the excitement towards the start of the Games. With eleven days to go until the Olympic Flame the lights the cauldron at the Opening Ceremony it is great to see London ready to welcome the Flame and set to celebrate inspiring people and amazing places in each and every Borough.’

Given the huge and enthusiastic crowds that have followed the Olympic Torch Relay on its journey around the UK – as estimated 9 million people have cheered on the Torchbearers to date – LOCOG and Transport for London (TfL) advise that the week when the Olympic Torch Relay is in London is expected to be exceptionally busy. Very large crowds are expected to line the London route and, alongside a number of road closures as the Olympic Flame visits all 33 London Boroughs from Saturday 21 to Friday 27 July, this will have an impact on traffic and transport networks in local areas.

As a result, at certain times and in certain places, London’s roads and public transport networks are expected to be much busier than usual. LOCOG and TfL advise Londoners that, if possible, it would be best to stay local and try to view the Flame when it passes through the area nearest to home or place of work. People will also be able to watch the arrival of the Flame live on the BBC.

On Thursday 26 and Friday 27 July in particular, roads in central London will be exceptionally busy and there will be a large number of road closures necessary along the route. On 27 Friday July, those without a ticket for the Opening Ceremony or another event in the Stratford area are advised to avoid the area from 3.00pm.

TfL has already issued advice to motorists that, from this week, they should avoid driving in central London, around the Olympic Route Network and Games venues.

On Friday 27 July, the final day of the London 2012 Torch Relay will gather momentum at Hampton Court Palace where Torchbearers will carry the Flame around the grounds of the Palace and through the world’s oldest hedge maze.

At about 7.30am the Flame will be carried on board Gloriana, The Queen’s Rowbarge which was presented to and named by Her Majesty The Queen in a ceremony that took place earlier this year and will provide a lasting legacy to mark Her Majesty’s Diamond Jubilee. The Flame will light a ceremonial cauldron on board Gloriana and over the course of the morning seven Torchbearers will light a Torch from the cauldron and carry the Flame for about eight minutes each at selected areas that are viewable from the banks of the River. The Torchbearers for the last day of the Relay – all members of the public with personal best stories – will be confirmed shortly.

Gloriana will be rowed by 16 oarsmen and women who will be drawn from a squad of 28 rowers on-board on the day. The squad is made up of former British Olympic crews dating back to the 1948 Games and ‘Olympians of the future’ from London Youth Rowing. Gloriana will be accompanied by a small number of craft designed to showcase London’s waterborne heritage as the Flame makes its way towards the Olympic Stadium.

The finale to the public participation in the Torch Relay will see the last Torchbearer on the River Thames carry the Flame to Tower Bridge for a final photo opportunity in front the Olympic Rings at approximately 12.45pm. The Flame will then remain out of public view at City Hall until it appears at the Opening Ceremony.

The Mayor of London Boris Johnson said: ‘The arrival of the Olympic Flame is a huge moment for the capital and an incredible opportunity for Londoners to experience, right on their doorsteps, the growing excitement as the countdown to the start of the 2012 Olympic Games moves ever nearer. From Redbridge to Bexley, Richmond to Haringey an incredible array of events and celebrations are planned so I’d encourage everyone to find out what’s happening in their local area and get involved in this summer like no other.’

Sport and Olympics Minister Hugh Robertson said: ‘The Torch Relay has received a rousing reception from the British public over the last two months, with millions of people lining the streets to support the local hero Torchbearers as they passed by some of Britain’s most iconic landmarks and landscapes.

‘Now the Flame is on the home straight. Its arrival in London and journey through the capital marks the final countdown to what will be a great Games.’

A selection of highlights for the week-long tour of the capital include:

Cutty Sark: Sir Robin Knox-Johnson carried the Flame for a lap around the restored Cutty Sark ship. Sir Robin was the first person to sail solo non-stop around the world, founded the Clipper Round the World Yacht Race in 1995 and has been a Cutty Sark Trustee since 2011.

Sunday 22 July
EDF Energy London Eye: Amelia Hempleman-Adams, 17, from Surrey, who at the age of 16 became the youngest person to ski to the South Pole held the Flame on top of a capsule on the London Eye.

Monday 23 July
Stephen Lawrence Charitable Trust Centre: Doreen Lawrence, 59, from Catford carried the Flame into the forecourt of the centre set up in memory of her son as base for community learning and development.

Wimbledon All England Lawn Tennis and Croquet Club: a Torchbearer carried the Flame onto Centre Court.

Tuesday 24 July
Hook Community Centre: The first Torchbearer of the day James Cracknell, 40, started the Torch Relay at the Hook Community Centre in Kingston. Since retiring from international rowing in 2004 he is perhaps best known for his physical endeavours since this time. Many of the challenges that James undertakes result in him raising huge amounts of money for charity. Currently, James is campaigning to promote the use of cycle helmets using his own inspirational journey of recovery to illustrate their importance since his near fatal collision whilst riding his bike in 2010.

Wednesday 25 July
Alexandra Palace: Daley Thompson will be the last Torchbearer of the day and will light the celebration cauldron at the Haringey evening celebration event. Daley holds more decathlon honours than anybody before or after him. He was the first person ever to hold the World, Olympic, Commonwealth and European titles at the same time, as well as the World Record. He was unbeaten in competition for 9 years. He trained at nearby Haringey Athletics Club.

Thursday 26 July
3.33pm – BBC White City: Two Torchbearers will exchange the Flame at the site of the finishing line in the stadium of the 1908 Olympic Games. One of the two Torchbearers is Antoine de Navacelle. Antoine is the great grand-nephew of Baron Pierre de Coubertin, the father of the modern Olympic Games. Antoine is closely involved in the Olympic movement and has promoted the Coubertin Award student essay competition ahead of the London 2012 Games to promote wider understanding of the Olympic ideals. As a board member of the International Pierre de Coubertin Committee, Antoine acts as an advocate for the values of respect, excellence and friendship remaining embedded in the modern Olympic Games

Joe Kleimanhttp://wwww.themedreality.com
Raised in San Diego on theme parks, zoos, and IMAX films, InPark's Senior Correspondent Joe Kleiman would expand his childhood loves into two decades as a projectionist and theater director within the giant screen industry. In addition to his work in commercial and museum operations, Joe has volunteered his time to animal husbandry at leading facilities in California and Texas and has played a leading management role for a number of performing arts companies. Joe previously served as News Editor and has remained a contributing author to InPark Magazine since 2011. HIs writing has also appeared in Sound & Communications, LF Examiner, Jim Hill Media, The Planetarian, Behind the Thrills, and MiceChat His blog, ThemedReality.com takes an unconventional look at the attractions industry. Follow on twitter @ThemesRenewed Joe lives in Sacramento, California with his wife, dog, and a ghost.
Share
Facebook
Twitter
Linkedin
Email
Print
WhatsApp
Pinterest
ReddIt
Tumblr
Previous articleFranklin Institute Receives $2.5 Million Donation From Pharmaceutical Firm Brand Teva For Exhibit on Human Brain
Next articleSenheiser Offering RF Workshop in NYC August 6