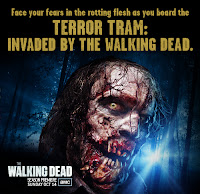 AMC’s “The Walking Dead” has a significant presence at this year’s “Halloween Horror Nights” in addition to the “Terror Tram.” An immersive new maze, “The Walking Dead: Dead Inside,” based on the compelling series” will also debut at the event.

Mirroring AMC’s critically-acclaimed, Golden Globe®-nominated, Emmy® Award-winning TV series, “Terror Tram: Invaded by The Walking Dead” will expose guests to a legion of plagued zombies in the aftermath of the disease’s cataclysmic spread to the West Coast.

The world of television fantasy will collide with grim reality when “Terror Tram: Invaded by The Walking Dead” pits guests face-to-face with a swarm of living corpses doomed to stalk Universal Studio’s famed backlot—-the heart of the world’s most famous horror moviemaking studio.

John Murdy, Creative Director, Halloween Horror Nights, said: “The ‘Terror Tram’ is one of the most popular ‘Halloween Horror Nights’ attractions since it’s the only time people can walk on the historic Universal backlot where the horror film genre was born. The juxtaposition of the backlot’s rural setting amid a small town devastated by a horrific plane wreckage complements the TV series’ sets almost to a tee and provides the ideal backdrop to showcase the ‘walkers’ from AMC’s ‘The Walking Dead’ on a grand scale.”

Other mazes will include: “Welcome to Silent Hill,” based on the popular video games and film franchise; a new maze by legendary shock rocker, “Alice Cooper Goes to Hell 3D,” and a reimagined “La Llorona: Cazadora de Niños” maze, based on the terrifying Mexican and Latin American legend that has terrified children for centuries. Additional haunted attractions to be announced shortly.

AMC’s “The Walking Dead” is based on the comic book written by Robert Kirkman and published by Image Comics. The series tells the story of the months and years that follow after a zombie apocalypse. It follows a group of survivors, led by police officer Rick Grimes, who travel in search of a safe and secure home. “The Walking Dead” is the most watched drama series in basic cable history for adults 18-34, adults 18-49 and adults 25-54. The series premieres on AMC on Sunday, October 14 , at 9:00 p.m. ET/PT.

Joe Kleimanhttp://www.themedreality.com
Raised in San Diego on theme parks, zoos, and IMAX films, Joe Kleiman would expand his childhood loves into two decades as a projectionist and theater director within the giant screen industry. In addition to his work in commercial and museum operations, Joe has volunteered his time to animal husbandry at leading facilities in California and Texas and has played a leading management role for a number of performing arts companies. Joe has been News Editor and contributing author to InPark Magazine since 2011. HIs writing has also appeared in Sound & Communications, LF Examiner, Jim Hill Media, and MiceChat. His blog, ThemedReality.com takes an unconventional look at the attractions industry. Follow on twitter @themedreality Joe lives in Sacramento, California with his fiancé, two dogs, and a ghost.
Share
Facebook
Twitter
Linkedin
Email
Print
WhatsApp
Pinterest
ReddIt
Tumblr
Previous articleSilver Dollar City’s Outlaw Wooden Coaster to Feature Three Inversions
Next articlePHOTO ESSAY: EXPO 2012 Closing Ceremonies August 12, 2012