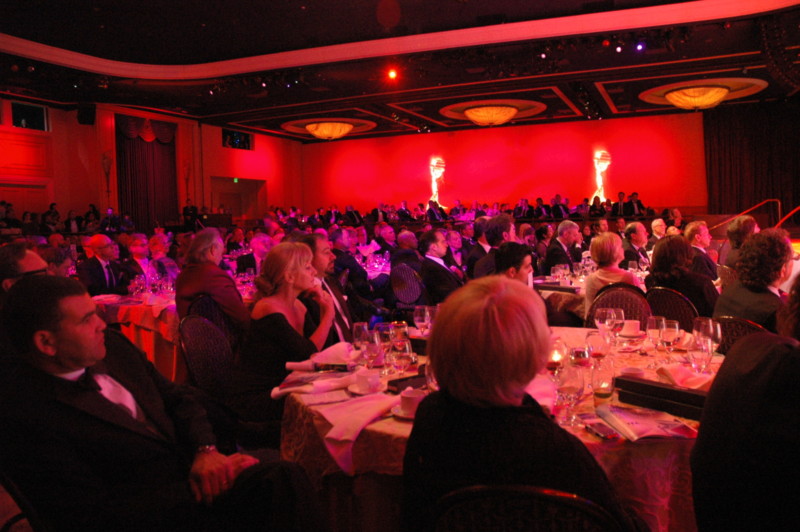 The last day of the Themed Entertainment Association’s Summit weekend offered a morning of discussions between the industry’s present and future leaders before capping with the razzle-dazzle “main event” honoring this year’s Thea Award recipients.

The invited guests for the morning were Buzz Price Award recipient, Frank Stanek, Technifex CEO and TEA co-founder Monty Lunde, and Thinkwell Chief Creative Officer and TEA Past President, Craig Hanna.  One of the dominant themes of the discussion was specialization versus generalization.  Is it better to be a Jack (or Jill) of all trades, or is it better to hunker down within a specialized set of skills?  How can you be a generalist when company HR departments are only reading resume keywords?  The consensus among the group was that the more adaptable you are, the greater career longevity you will most likely enjoy.

The speakers offered their personal stories as examples of how being flexible can offer big career benefits.  Stanek began his career at Disney as a locksmith.  He had no idea how to cut keys, so he spent evenings learning from his father.  Less than a decade later, he was an integral part of what would become Walt Disney Imagineering, responsible for business planning on all new Disney projects.  Lunde’s first job was selling persimmons, and he originally thought he would pursue a medical career like his father before him.  Instead, he joined Disney’s EPCOT Illusioneers team before founding Technifex in 1985.  Craig Hanna made himself indispensible (something he advised the students to do themselves), parlaying what was supposed to be a six-month contract position at Universal into six years as Director of Attraction Development before also going his own way and co-founding Thinkwell.

Lunde told the students that their career would most likely result in a series of right turns.  As long as you’re not making U-turns, he said, openness to this perpetual state of pivot can only serve to broaden your skill set as well as your LinkedIn following.  And what to do about those pesky HR people who throw your resume into the circular bin when they don’t see the words ‘engineer’ or ‘AutoCAD’?  “Ignore them,” Hanna instructed.  “After this weekend, you have a room full people you can contact.  You don’t need to go through those channels anymore.”  The bottom line is, know what you bring to the table, and if you aren’t familiar with a specific skill that you might need for a job, smile, nod and learn it quickly. As Craig Hanna so adeptly quoted from Ghostbusters, “if someone asks you if you’re a god, you say ‘YES!’”  Don’t assume a particular job isn’t right for you, and if you get it and it turns out not to be a fit, just keep pivoting.

Stanek, Lunde and Hanna’s stories had a profound effect on the students, and the feedback from the breakfast was extremely positive.  “I honestly cannot describe how meaningful those two days meant to me,” said one student.  “As I was there, I was amazed at how open and willing everyone was in helping Next Gen members.”  Another student said the event helped her “stand taller” and left her “with many more friends who range from writers to engineers…an awesome feeling.”  Having witnessed the event as a Next Generation Committee member, I can unequivocally say that the students’ energy was contagious, and I cannot wait to see where these future industry leaders land.  A big “thank you” to Next Gen Committee Chair Kile Ozier and TEA Event Producer, Kathy Oliver for their hard work and dedication in organizing Breakfast with Champions.  For more student comments, as well as photos from the event, visit InPark Magazine’s Facebook page.

That evening, it was time to dim the music, light the lights and wear your best penguin suit or gown as the Thea Awards took center stage.  The theme of the ceremony was ‘Pure Imagination: Through the Eyes of a Child”, and the host was a young boy named Valin with big dreams (and great dance moves).  Throughout the evening, we marveled at towering Transformers characters Bumble Bee and Optimus Prime, watched Cars star Mater the Tow Truck roll onto the stage, and gasped as the death eaters from Harry Potter surrounded us.  Even actress Bonnie Hunt, who played Sally in the Cars movies, joined the festivities, presenting the Thea Award for Cars Land to the movies’ director, John Lasseter.  “This year’s Theas were absolutely sensational, one of the best ever,” said Keith James, Chief Executive Officer of TEA member-company, JRA, and TEA Past President.  “Not only were the projects first rate, the production values, singers, dancers and special guests were unbelievable.  It made for a fun night to be a part of, and the whole TEA team did a stellar job.”

Congratulations to Summit co-chairs Roberta Perry and Pat MacKay, and to Kathy Oliver, Gene Jeffers, Judith Rubin, Christine Kerr and the entire TEA staff and board for a fantastic weekend of events.