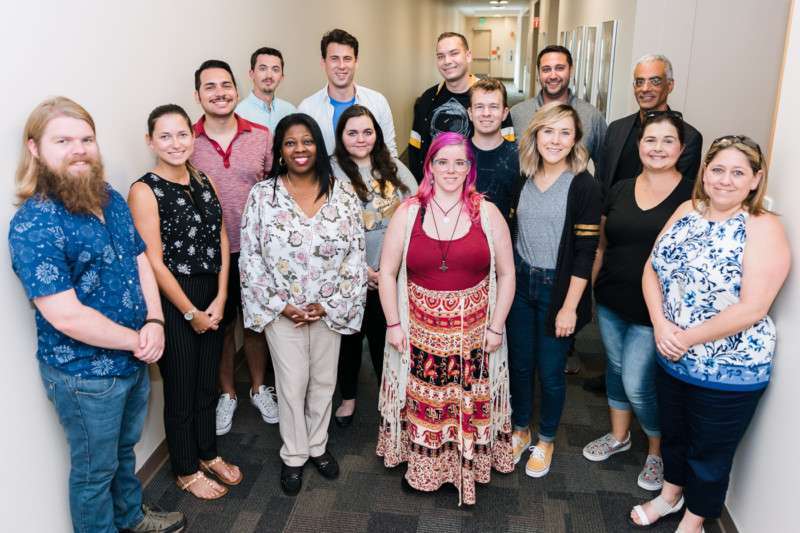 The expansion of formal themed experience education will benefit the industry

ABOVE: Peter Weishar (third from right) with his class at University of Central Florida Courtesy of Peter Weishar

The attractions industry has matured to the point where formal education in the design and production of themed experience will become the norm for those entering the field. This is a process already in motion, and a positive evolution for the industry.

If you are currently employed in the design and production of themed entertainment, chances are you did not major in themed experience in college. Instead, you probably have a degree in a related field such as design, theatre, architecture, engineering, writing, film, etc. A large percentage of you probably got your first job because “they were hiring.” Those of you who aspired to the theme park industry from a young age probably studied a related field and maybe worked operations as a way to gain experience.

So, if almost every creative came from another field, and the industry is thriving, why change the way we educate and recruit new talent? (It has certainly worked up to now.) The answer: we need established college degree programs in themed entertainment because creating effective narrative environments has become more complex and nuanced as rising guest expectations continue to drive more sophisticated and innovative storytelling. Themed experience has become more than a leisure pastime; it is a complex, diverse and pervasive artform; an international cultural phenomenon worthy of study. Formal and structured education in the field will become a necessity for the health and growth of the themed experience industry.

Academia usually lags a few years behind adopting emerging creative mediums. However, once the academic world embraces a new artform, it can make profound and positive changes to the field. Two pertinent examples come to mind: Film schools and Digital Media schools. (I have extensive academic experience in both fields in the US – first as a professor of Digital Media and Computer Art in NYU Film School and later as the Dean of Film and Digital Media Performing Arts at Savannah College of Art and Design.)

The film schools in my example were originally formed as an expansion to traditional Theatre programs. Two of the pioneering US film schools, University of Southern California and New York University, were founded in 1929 and 1965 respectively. To place this in perspective, motion pictures were invented in 1892. The first “Hollywood” studio was established in 1919, but it was not until the late 1970s that film schools started to become popular fixtures in colleges and universities. Today there are over 1,200 film schools in the US and over 2,600 internationally. The majority of working creatives in the film industry studied at one of these schools. It is difficult to name more than a handful of famous filmmakers who did not.

Leading film schools such as USC, UCLA, AFI and NYU do more than just provide an industry with future employees. These institutions have helped develop and profoundly influence the art form. With their locations at the hubs of the American entertainment industry, they not only provided graduates access to industry, but also worked as a place to experiment and learn new methodology of expression through the film medium. It takes some time for the graduates of a program to enter an industry and eventually obtain positions of leadership where they can effect change. However, that change from the influence of film school education on the art form is undeniable.

Digital media is a much newer art form than film. However, it has followed a similar trajectory. We have gone from a handful of programs when I first started teaching 3D art at the NYU Interactive Telecommunications Program in the early 1990s to hundreds of accredited degree programs today.

In terms of college curriculum, themed experience today is where digital media was 20 years ago. There are a handful of programs across the US and overseas. Many established higher education institutions have started to offer programs in themed experience and entertainment design and production. Ten years ago, we could point to the Entertainment Technology Center at Carnegie Mellon as the single prominent university offering a program that incorporated the design of themed experiences into a specific degree program. Today, University of Central Florida, CalArts, Ringling College of Art and Design, SCAD, and the University of Arts in London all offer degree programs in this field. Many other institutions offer lecture series, elective courses and concentrations (concentrations are a group of three or four elective classes in a particular subject). Still more institutions are in the planning stages. As with almost every emerging discipline, there is skepticism within the academic community. In all fairness, academic institutions must scrutinize new ideas and proposals to ascertain whether or not the new degree is just a trend or a unique and distinct area worthy of study.

Degree programs in themed experience and entertainment offer distinct and immediate advantages for industry. For graduates whose first choice is a career in themed entertainment, they provide a clear understanding of the field. For employers, student portfolios will be tailored to pertinent and focused work that will reduce the guesswork when hiring. There will be greater retention than hiring graduates who originally aspired to work in a different industry. There will also be reduced training costs since these students will be familiar with the tenets of the trade and workflow. At UCF we have found that themed experience degree programs are most effective at the graduate level since they accept candidates from a variety of creative disciplines and then help them focus on creating compelling environments with their existing craft skills.

Degree programs in themed experience and entertainment also present significant long-term benefits to the future and vitality of the field. Graduate students and faculty at research institutions such as UCF push the envelope to explore concepts and ideas unrestrained by accountants and tight production schedules. Universities are a place where new and “out there” ideas flourish, and experimentation is integral to the fabric of the institution. Themed experience graduates will have spent years studying the history and context of environmental narrative and then learn to apply the new knowledge so industry and academia will learn from each other. I can envision a time when there will be hundreds of institutions offering accredited programs in themed experience and entertainment. Just as in film and digital media, they will help the industry achieve even greater things. • • •

Peter Weishar ([email protected]) is a Professor of Themed Experience and Program Director of the Themed Experience Graduate track at the University of Central Florida (https://www.ucf.edu/degree/ theatre-mfa/themed-experience/). He also serves as an Associate Member of the TEA Eastern Division Board, and chairs the TEA Academic Network. Previously, Weishar was Dean of Fine Arts at FSU and Director of the Themed Experience Institute. He also served as Dean of Entertainment Arts at SCAD where he founded the first MFA in Themed Entertainment Design. Weishar has authored three books, Digital Space: Designing Virtual Environments; Blue Sky: The Art of Computer Animation; and CGI: The Art of the Computer Generated Image.

Peter Weishar
Peter Weishar ([email protected]) is a Professor of Themed Experience and Program Director of the Themed Experience Graduate track at the University of Central Florida (https://www.ucf.edu/ degree/ theatre-mfa/themed-experience/). He also serves as an Associate Member of the TEA Eastern North America Division Board, and is chair of the steering committee of the Themed Experience and Attractions Academic Society. Previously, Weishar was Dean of Fine Arts at FSU and Director of the Themed Experience Institute. He also served as Dean of Entertainment Arts at SCAD where he founded the first MFA in Themed Entertainment Design. Weishar has authored three books, Digital Space: Designing Virtual Environments; Blue Sky:The Art of Computer Animation; and CGI:The Art of the Computer Generated Image.
Share
Facebook
Twitter
Linkedin
Email
Print
WhatsApp
Pinterest
ReddIt
Tumblr
Previous articleOrlando is no small world anymore
Next articleADG: Waves of fun