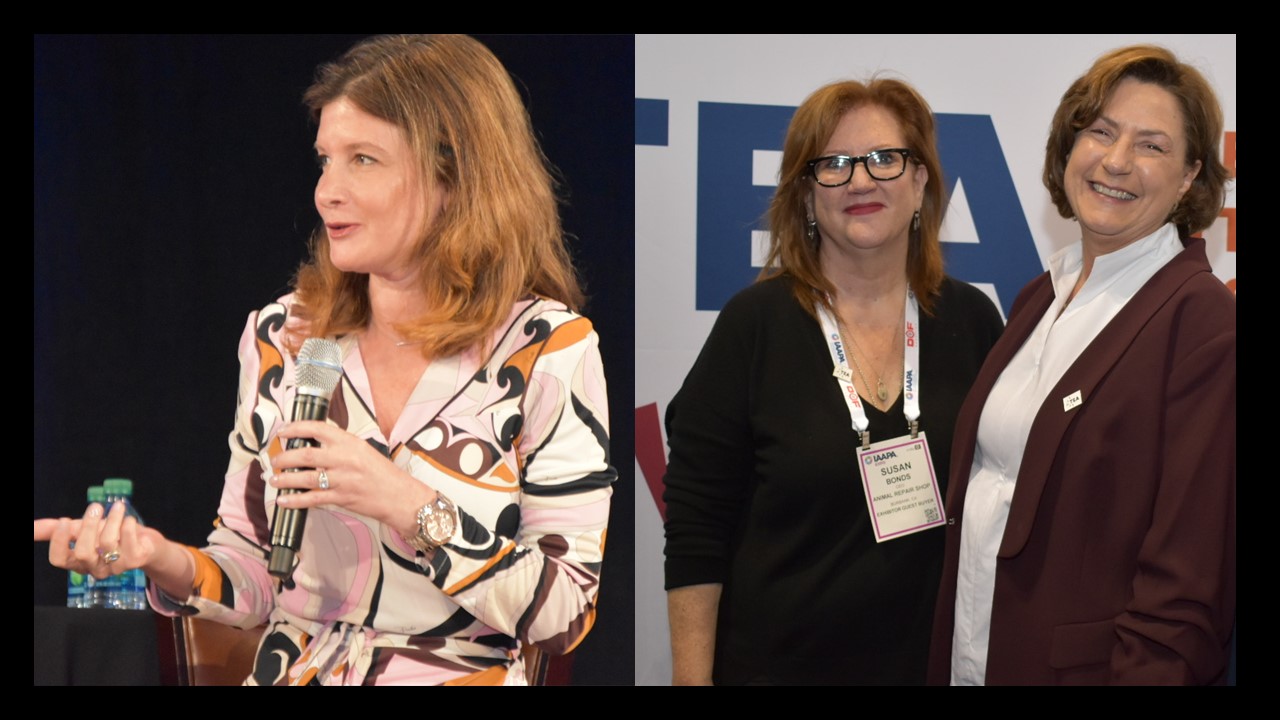 Interviews for InPark by Clara Rice

The three women interviewed here in connection with the 26th annual TEA Thea Awards are all entrepreneurs and innovators. All have owned their own businesses and worked for major theme park operators, and all have worked to help foster a more diverse, dynamic, and successful industry.

A systems engineer by training, Susan began her career in aerospace at Lockheed’s Advanced Development Projects, then joined Walt Disney Imagineering, where her projects included “Indiana Jones Adventure” at Disneyland and “Mission: SPACE” at Epcot. She went on to produce the MMORPG “Uru: Ages Beyond Myst” before co-founding 42 Entertainment in 2004. Susan Bonds chaired the 26th annual TEA Thea Awards Committee.

SB: “True convergence” is the alignment of social, technology, gaming, and storytelling, giving audiences an authentic and validated role in the experience. At WDI we constantly talked about the envelope and how to fully immerse guests. Today, designers have tools to capitalize on immersion: to build shared experiences and engage characters to affect agency and outcome.

CR: You advocated for TEA to create a Connected Immersion category for the Thea Awards. How do you see connected immersion evolving in the next few years, and where does that leave more traditional experiences?

SB: Connected immersion is a category meant to recognize experiences that blend the digital and real world. The challenge early on in our industry was to make something classic that lasts – 10, 25, 50 or even 100 years. The opportunity now is to make something that can be reprogrammed as the audience evolves.

This approach expands traditional storytelling into new areas, redefining new experiences overlaid onto the familiar, and creating multi-use venues for owners to maximize their investment. We will see these connections become more and more seamless.

CR: You’re an entrepreneur, and I have heard you say that you would like to see more women in positions of leadership and entrepreneurship. How can we as an industry move the dial on this issue?

SB: There have been women in positions of leadership over multiple decades, but too often they did not get the title or the recognition. Let’s recognize some of these women NOW – even belatedly. Let’s encourage women-to-women mentorships and networking. Let’s share the spotlight. Sharing more about what we are individually and collectively accomplishing is key!

CR: What did you enjoy most about being Chair of the 26th Thea Awards Nominating Committee and do you have any words of wisdom for your successor in the role, David Cobb?

SB: Being on the Thea Awards Nominating Committee means that you are mixing it up with the true entrepreneurs and innovators of themed entertainment: those pushing the envelope of where the industry is headed, as well as legends who built the industry from the ground up with no roadmap to follow. What a great sense of responsibility – to keep the standards that differentiate us in the market, yet recognize the evolution of entertainment, and the impact of technology and audience behaviors in our industry.

My advice to Dave is, “keep your hand on the wheel, look to the horizon, listen to the wise crew rowing the boat, and have fun!”

Nancy Seruto is the recipient of the Buzz Price Award for a Lifetime of Outstanding Achievements. Her inspiring, 30-year journey as supplier, creative, project manager and entrepreneur has taken her around the world and touched nearly every vertical of themed entertainment, including theatre and performing arts, touring exhibits, museums, theme parks, retail, restaurants, live events, and casinos. She oversaw several projects over her past decade with Imagineering, including “Treasure Cove” and “Pirates of the Caribbean: Battle for the Sunken Treasure” at Shanghai Disneyland.

CR: So many of us, myself included, came to the industry from the theatre. Why is that?

NS: What we do in theme parks is rooted in theatre. For centuries, there have been those who are drawn to the public form of storytelling that is now theater. This has evolved into film and many other digital formats, but I think the instincts come from the same place.

CR: You are considered one of the best producers and creative leaders in the industry. What are the essential qualities of a successful producer? Do these qualities differ depending on the size of the project or the vertical?

NS: A producer needs to keep firmly rooted in the business aspects of a project, while understanding and reaching for the nuance of creative excellence, and what makes something great art. At Walt Disney Imagineering, a producer is a leader of a very qualified, innovative and self-driven team. So, on the soft skills side, a producer at Imagineering does not need to be a manager of tasks, but a conductor of a highly skilled orchestra – also a catalyst for creativity and innovation, a facilitator and connector of groups.

Empathy and understanding are also key qualities, and conviction is a word I repeat to myself often. It’s super important: having the confidence to stay the course and work through the challenges as they come up, and trust in your experience, abilities, and instincts. As projects grow in scale, all of these qualities are put to the test, but they are core qualities.

CR: Please tell us about your work with Imagineering’s outreach program.

NS: Imagineering’s outreach program brings Imagineers together with cultural and nonprofit institutions to collaborate with them in solving their own creative challenges. By doing this work, we are engaging with some of the most brilliant scholars of our times. The exchanges broaden our perspective and often give Imagineers an important platform for exploring and sharing their own histories. Through this interaction, we also demonstrate that diverse teams are fertile grounds for creativity, and this in turn helps influence how we build teams, widening the aperture to include a broader perspective and range of voices.

CR: In the last episode of the Disney+ series, “The Imagineering Story you said, “when you go to a different culture, and you live in a different country, and you work differently, it changes you. It changes you forever.” How did the experience of creating Shanghai Disneyland change you forever?

NS: This is not easy to answer, as there are many layers, but let me try to break it down, because over the course of seven years in anyone’s life, many things can be transformative.

At a professional level, the project fundamentally challenged assumptions around process. It is a shared roadmap you all agree on and follow, that builds confidence phase by phase. But when one works globally, they can’t assume process is shared. So right there, you are thrown off kilter and forced to rethink, and in doing so, you learn to be flexible, to think on your feet, adapt and find new ways of thinking.

At a deeper and more personal level, the journey led me to collaborate creatively with artists and craftspeople from China over seven years, to create and build something together. And because my relationships with them continue, they are now a part of how I see the world… through a different lens, through their eyes as well as my own.

This was a really tough job. The realization that you could not control so much of what was going on was challenging for all of us. Living away from home for so long was difficult and lonely. But despite the challenges, we built strong bonds, and through that shared experience, we made it. The power of what can be achieved through sheer will, and with the force of the whole company behind us, will forever leave a very humbling impression on me.

Wendy Heimann-Nunes is receiving the TEA Peter Chernack Distinguished Service Award for her contributions as pro-bono counsel of the Themed Entertainment Association. She spent the early years of her career in the theatre. A few years after receiving her law degree, she assumed the role of executive director at The Chicago Theatre. While negotiating a major theatre deal with Disney Development Corporation, she became fascinated by mixed-use development and location-based entertainment, and went on to lead the Business and Legal Affairs Department at Universal Creative before founding her own law firm, which features a practice area dedicated to LBE and immersive experiences.

CR: When you got the call saying you’d be receiving the award, what was your reaction?

WHN: It was such a cliché reaction. When Michael [Mercandante, TEA Immediate Past President] called, I couldn’t process what he was saying. Then it was just gratitude and total astonishment. My whole career is in this industry, and there’s a reason. I will never feel like I’ve done enough.

CR: In a 2016 article on the TEA Blog, you wrote, “I would like to see us applying our core competencies farther and farther into overlapping and relevant industries.” What do you think is the next frontier for our industry?

WHN: The next frontier that I’m committed to penetrating, which I find absent in our industry, are capital sources for mid-tier and lower-tier opportunities, things that are not going to be funded by investment banks or the huge corporations. We need to free up capital for the growing, mid-market, experiential developments and their associated technologies – all the things that emanate from the escape rooms and the smaller FECs. We have beautiful product being created, but there’s not a direct path to capital like there is toward high-tech. It’s a void I’m committed to filling.

CR: Has gender equity improved in our industry in recent years?

WHN: Anecdotally, I still don’t see a lot of female executives in the market. When female entrepreneurs need to go out to capital markets to raise money, there is still systemic sexism, despite there being more female venture funds.

You break the glass ceiling by building your own house. Speaking personally, if I was going to pursue my authenticity and ambition, especially as a woman, there was no way I was going to work for anyone else. I think our industry is still very male-dominated, which is particularly embarrassing in that it doesn’t reflect our consumers. I do think that the next generation is very different – what we are dealing with now are some lingering legacy systems that are still creating a hindrance for women to succeed. Is there a social zeitgeist happening? Yes. Do I think we are there yet? No.

CR: You call yourself a “cheerleader for the themed entertainment industry”? Why is it so important to you?

WHN: Ever since I can remember, I have wanted to create – I wanted to be a part of something that was about creating. I realized relatively early that my type of creativity was in helping others create – building structures and opportunities for others to create. And that is my flow. It’s not a job for me; it’s my oxygen. It’s like music. I’m a drummer, and the same flow I feel when I’m drumming is how I feel when I help creators create.

That’s why I care so much about our community and our industry. I’m so grateful that the industry has given me the opportunity to express that. And I have truly marched my avocation.

Clara Rice, ICAL is the Director of Communications at JRA and Vice President of the TEA’s International Board of Directors. She has written over a dozen articles for InPark Magazine and has been a featured speaker at TEA and IAAPA events around the world.