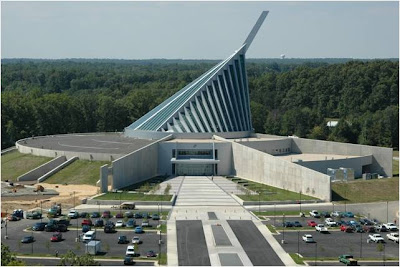 Dumfries, VA, USA (June 19, 2012) /BUSINESS WIRE/ — The Marine Corps Heritage Foundation (MCHF) is pleased to announce its largest individual contribution to date. Timothy T. Day, Chairman and CEO of Bar-S Foods, Co., has granted the MCHF a $12 million donation through the Timothy T. Day Foundation. The donation is a lead gift towards the completion of the National Museum of the Marine Corps’ galleries, telling the stories of Marines who have served since 1975. The donation will also fund the creation of the Timothy T. Day Overlook, to be located in Semper Fidelis Memorial Park. The new overlook will create an inviting view of the Museum, chapel and park for visitors and will be a fitting location for future Museum and MCHF ceremonies.

As part of its mission to share the history, traditions and culture of the Marine Corps, the MCHF is working to complete the development and construction of the Marine Corps Heritage Center, which includes the National Museum of the Marine Corps and Semper Fidelis Memorial Park. The Museum opened with exhibits documenting World War II, Korean War, and Vietnam War, as well as galleries on boot camp and combat art. Three additional galleries interpreting the period from 1775 through the Civil War, the Age of Expansion, and World War I opened in 2010. The exhibits telling the story of Marines who have served since the Vietnam War are scheduled to open in 2017.

“When the Marine Corps Heritage Foundation announced it was seeking donations to construct exhibits in the National Museum of the Marine Corps to honor those Marines who served since the end of the Vietnam War, Tim Day stepped up to help make sure their stories are told,” said LtGen Robert R. Blackman, Jr., President and CEO of the Marine Corps Heritage Foundation. “The Foundation feels a duty to recognize those who made history in Beirut, Desert Shield and Desert Storm, Somalia, and those who have served more than a decade of continuous combat in Iraq and Afghanistan. Tim Day’s generous contribution also ensures the creation of a beautiful overlook which will enrich visitors’ time at the Heritage Center. He shares our vision, and is an inspiration to all Marines.”

Day is the recipient of the 2012 MCHF John A. Lejeune Recognition for Exemplary Leadership Award, which recognizes an individual who epitomizes the core values of honor, courage, and commitment. He made his surprise gift announcement during his acceptance of the Lejeune Award this past spring.

Joe Kleimanhttp://wwww.themedreality.com
Raised in San Diego on theme parks, zoos, and IMAX films, Joe Kleiman would expand his childhood loves into two decades as a projectionist and theater director within the giant screen industry. In addition to his work in commercial and museum operations, Joe has volunteered his time to animal husbandry at leading facilities in California and Texas and has played a leading management role for a number of performing arts companies. Joe has been News Editor and contributing author to InPark Magazine since 2011. HIs writing has also appeared in Sound & Communications, LF Examiner, Jim Hill Media, and MiceChat. His blog, ThemedReality.com takes an unconventional look at the attractions industry. Follow on twitter @ThemesRenewed Joe lives in Sacramento, California with his fiancé, two dogs, and a ghost.
Share
Facebook
Twitter
Linkedin
Email
Print
WhatsApp
Pinterest
ReddIt
Tumblr
Previous articleDollywood’s Splash Country Announces Tennessee’s First Water Coaster for 2013
Next articleInformation Builders Chosen by Columbus Zoo to Manage Information Systems