By Martin Palicki
November 22, 2011
Facebook
Twitter
Linkedin
Email
Print
WhatsApp
Pinterest
ReddIt
Tumblr
Pigeon Forge, TN  – The folklore of the Smokies tell of mystical characters traveling through the misty woods, bringing the winter snow and frost with them as they paint the region in sparkling crystal. From across the Atlantic, a new personality has arrived to bring the fantasies of the season to life in the mountains as the Titanic Museum Attraction welcomes the Titanic Snow Princess for the first time ever to the Smokies. With each magical visit, the princess’ arrival will be heralded with real, falling snow from the great ship’s bow.
“The Titanic Snow Princess is a shining star for this year’s Titanic Christmas in Winter Wonderland,” says John Joslyn, expedition leader of the first private exploration dive to the Titanic and owner of the Titanic Museum Attraction. “She represents the magic and mystery of the holiday season common to children in 1912 and today.” 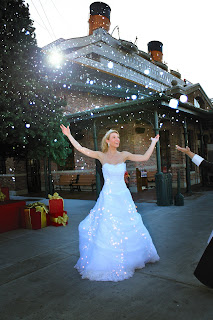 The Titanic Snow Princess brings the fairy tale legends of her own home across the waters to the peaks and forests of the Great Smoky Mountains, delivering holiday enchantment beginning Thanksgiving weekend (Thursday, Friday and Saturday Thanksgiving week only at 6 p.m.) and continuing every Saturday evening at 6 p.m. through December 17 at the Titanic Museum Attraction in Pigeon Forge. The Snow Princess will arrive by horse-drawn carriage and, with the wave of her hand, will light the winter night with thousands of Christmas lights and decorations aboard the Titanic as the invisible sprites of the mountains magically create a snowfall from the ship’s bow to welcome the fairy tale royalty.

“Every day, but especially at Christmas, we remember and honor the men, women and children who sailed on the Titanic. At this special time, our guests truly experience what it was like onboard the ship in 1912, and how it might have looked on a Christmas voyage almost 100 years ago,” says Joslyn.

The Titanic Museum Attraction in Pigeon Forge, Tennessee, opens daily at 9 a.m. Reservations are strongly suggested since many days sell out entirely. Passengers may purchase tickets online at www.titanicattraction.com or by phone at (800) 381-7670.