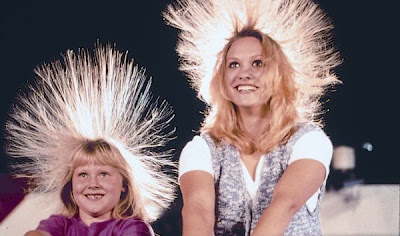 Wisconsin Dells, WI, USA — From a simple puzzle that wracks your brain until you get it right, to the amazing discoveries and milestones of space travel, the Tommy Bartlett Exploratory and Interactive Science Center celebrates 30 years of piquing human curiosity. The Exploratory opened its doors in 1982 and has since evolved into a year-round Interactive Science Center with more than 175 exhibits that challenge your senses and test your knowledge of science.

“We try to break down science so people understand it. Our goal is to do it in an entertaining way; the educational aspect is the side effect,” said Mark Schilling, senior vice president and director of operations for Tommy Bartlett Inc., who spends much of his time helping develop the Exploratory exhibits.

This year, the Exploratory is going big, really big, with a new outdoor exhibit. The new Giant Lever is designed to help even the smallest of visitors show off their “super-human strength.” The exhibit involves a large 57-foot steel beam, weighing almost three tons, on a support, allowing visitors to pull on a rope to lift a 5,000-pound, full-sized vehicle off the ground.

“Everyone knows you can’t lift a truck with your bare hands. But by constructing a simple structure – a large beam on a hinge – we demonstrate how to leverage the weight of the vehicle by using the Giant Lever,” Schilling said.

Schilling is always in search of new activities for the Exploratory. In addition to the Giant Lever, two other hands-on exhibits have been installed inside the Science Center. Dancing Sands demonstrates how vibration can create unique patterns of sand on a steel plate. Another new display shows how it is possible to roll a Square Wheel.

When the attraction first opened in 1982, it was simply called Tommy Bartlett’s Robot World, and its focus was on showcasing the House of Tomorrow. Its debut came at the height of the “Star Wars” movie phenomenon, and at $2.2 million, it was a major investment for the Tommy Bartlett organization. The film series created a passion for loveable robots like those in the movie, and Tommy Bartlett’s Robot World put forth its own, up-close look at the future. Robot characters, complete with sound effects and voice-over track, guided visitors on a tour of what “the future” might look like. The House of Tomorrow included a series of futuristic scenes using animatronics.

Robot World’s space-capsule-designed building was created by well-known architect, the late James Dresser, a protégé of Wisconsin’s most famous architect Frank Lloyd Wright. The unique structure has become an icon along the busy Wisconsin Dells Parkway, beckoning travelers to come on in for a curious look around.

The second year of operation, Robot World expanded to include a new area where visitors could learn more about science. The new Exploratory allowed visitors to delve into the hands-on activities and really discover how science works.

Over time, most of the older-style robots have been phased out, sans a few for posterity, and the facility began to delve into real-world space travel.

In 1997, Tommy Bartlett learned that an Original Russian Space Station MIR Core Module was up for sale by a struggling Russian museum. He jumped at the chance and bought the monstrous piece of space memorabilia. A new building was constructed onsite to house the 43-foot-long structure. The MIR Core Module was built to be a replacement for the MIR that was in space, but due to the breakup of the Soviet Union, the original module never made it to blast-off. It now serves as an anchor highlight of the space travel sector of the Exploratory, where visitors can also see exact replicas of the Sputnik satellite and a Mercury Space Capsule.

“People are always fascinated and pleasantly surprised when they see our space travel collection,” said Schilling. “It’s still amazing that we have an actual MIR space station module right here in Wisconsin, helping preserve the legacy of the MIR program.”

While the Exploratory is always looking for something new, Schilling admits it’s a challenge to keep up with the technology. Computer development is moving so fast, that getting cutting-edge gadgets to display is often a difficult task, as new items are usually to market very quickly. Moving into the future, the Exploratory may focus on a nod to the past as a way to showcase the evolution of technology.

“For example we could explore the evolution of video games. Kids take for granted the sophistication they see now with the gaming technology,” said Schilling. “Maybe we’d look at the history of gaming and how far it has come in such a short amount of time.”

And with technology always pushing the envelope, Schilling says sometimes just simple creative hands-on experiments are enough to break down science and make it fun.

Tommy Bartlett Exploratory is open daily, year-round, and, in addition to the displays on space exploration, offers more than 175 hands-on activities that delve into science, virtual reality, technology and good old-fashioned, brain-teaser fun. The Exploratory is open from 9 a.m. to 9 p.m. during summer and 10 a.m. to 4 p.m. during fall, winter and spring. For more information, \visit www.tommybartlett.com.

Joe Kleimanhttp://wwww.themedreality.com
Raised in San Diego on theme parks, zoos, and IMAX films, Joe Kleiman would expand his childhood loves into two decades as a projectionist and theater director within the giant screen industry. In addition to his work in commercial and museum operations, Joe has volunteered his time to animal husbandry at leading facilities in California and Texas and has played a leading management role for a number of performing arts companies. Joe has been News Editor and contributing author to InPark Magazine since 2011. HIs writing has also appeared in Sound & Communications, LF Examiner, Jim Hill Media, and MiceChat. His blog, ThemedReality.com takes an unconventional look at the attractions industry. Follow on twitter @ThemesRenewed Joe lives in Sacramento, California with his fiancé, two dogs, and a ghost.
Share
Facebook
Twitter
Linkedin
Email
Print
WhatsApp
Pinterest
ReddIt
Tumblr
Previous articleChihuly Garden and Glass Exhibit Opens at Foot of Space Needle
Next articleRWS and Associates Lights Up Cedar Point’s Nights

The Wilderness Resort in Wisconsin Dells renovates, revamps and reinvents for 2022