One of the most popular attractions in the history of Disney’s Hollywood Studios receives a new entrance to welcome guests when Toy Story Land opens June 30.

Since its 2008 debut, Toy Story Mania! has been a blockbuster hit with families, combining the fun of a video game, 4D technology and interactions with favorite Pixar stars, including Woody, Jessie, Buzz Lightyear, Hamm, Buttercup, Rex and Trixie.

Andy of Pixar Animation Studios’ Toy Story fame laid out Toy Story Mania! as a playset in his room. It’s rootin’ tootin’ fun as guests take aim at moving objects in a variety of scenes based on classic carnival midway games. 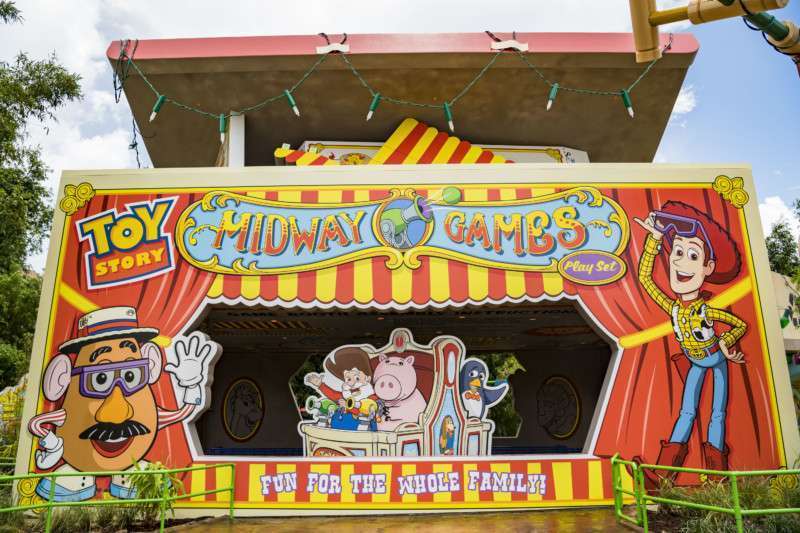 As the all-new gateway to the ride-through action inside, the carnival-style entrance with its candy-striped marquee is, in fact, the box Andy’s Toy Story Mania! Midway Games Playset came in. Looking out over the rest of Toy Story Land, the entrance welcomes stand-by and FastPass+ guests to fun and fast-paced games of skill.

“Toy Story Mania! is such a guest favorite,” said Phil Holmes, Vice President of Disney’s Hollywood Studios. “With its colorful new look, bringing the entrance into Toy Story Land was a natural decision. The attraction celebrates Pixar’sToy Story franchise in a way that’s fun for the entire family. And a recently added third track gets more guests to the action quicker as we bring the curtain up on this new land in Andy’s backyard.”

Guests queue through colorful games and game pieces, View-Master discs, Crayola crayon drawings and more. In one “box” of the queue, guests walk through a carnival midway that surrounds them on all sides. In another, they come across an Audio-Animatronics figure of Mr. Potato Head, who returns to Toy Story Mania! to serve as “Boardwalk Barker,” greeting guests with wise-cracking zingers. 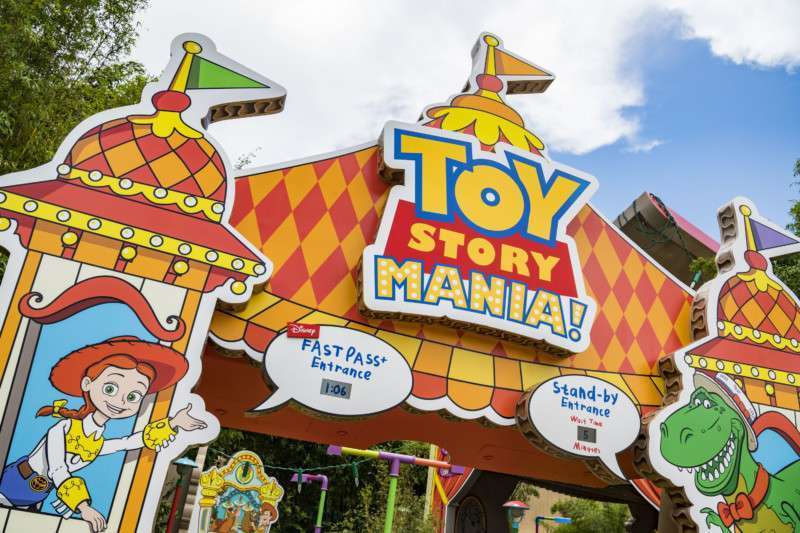 After a practice round of virtual pie-tossing, there are five game stops in all – plus 4D surprises like air blasts and water sprays.

Joe Kleimanhttp://wwww.themedreality.com
Raised in San Diego on theme parks, zoos, and IMAX films, InPark's Senior Correspondent Joe Kleiman would expand his childhood loves into two decades as a projectionist and theater director within the giant screen industry. In addition to his work in commercial and museum operations, Joe has volunteered his time to animal husbandry at leading facilities in California and Texas and has played a leading management role for a number of performing arts companies. Joe previously served as News Editor and has remained a contributing author to InPark Magazine since 2011. HIs writing has also appeared in Sound & Communications, LF Examiner, Jim Hill Media, The Planetarian, Behind the Thrills, and MiceChat His blog, ThemedReality.com takes an unconventional look at the attractions industry. Follow on twitter @ThemesRenewed Joe lives in Sacramento, California with his wife, dog, and a ghost.
Share
Facebook
Twitter
Linkedin
Email
Print
WhatsApp
Pinterest
ReddIt
Tumblr
Previous articleUnified Field provides media interactives for Ocean Wonders: Sharks!
Next articleDisney Parks introduces new interactive mobile app