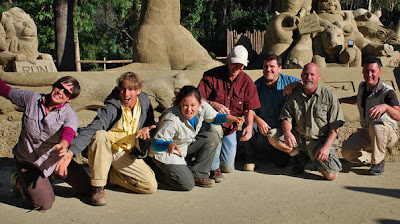 San Diego, CA, USA (May 16, 2012) /PRWEB/ — The San Diego Safari Park boasts over 900 acres and 3000 animals, amid a variety of unique exhibits and experiences. The Cheetah Run, a unique adventure at the San Diego Safari, lets one visitor each day challenge their speed against the world’s fastest animal. The cheetah is speedier than any other land animal, running as fast as 70 miles per hour. The fascinating attraction, however, is located in a far corner of the expansive Safari and was getting only a fraction of the interest that the Zoo expected.

Enter Sand Masters, a Travel Channel TV show, commissioned by the Safari to create a sand sculpture that would notify visitors of the Cheetah Run and spark their interest.

Using sand as their medium, the Sand Masters team created an incredible masterpiece featuring a lifelike running cheetah surrounded by perfectly sculpted spectators from the animal world. Carved in sand letters is the time and place of the daily Cheetah Run. Featured to the right of the lifelike animals is a sand-sculpted fossa, a cat-like predator. The fossa’s eyes gaze out at the crowd while its arms hold onto the Traffic Logix SafePace 100 sign, challenging visitors to test their speeds.

When Rusty Croft, the Sand Master leader presented the radar sign idea to his team they responded with enthusiasm. “That’s really cool,” said Kirk Rademaker, “that’s the part we needed.”

The first morning that the Sand Masters sculptured was unveiled, visitors were amazed at the remarkable sand sculpture. Many of them ran along its length, watching their speeds displayed in bright LED numbers on the SafePace 100 radar sign, which was strategically placed at an angle low enough to clock the speed of runners*.

Following the creation of the Cheetah Run sand sculpture, the Cheetah Run garnered a huge turnout with hundreds of people gathering to watch the cheetah sprint. The Traffic Logix SafePace 100 radar sign can be used to display the speeds of cars, bicycles, people, and even a sprinting Cheetah.

Joe Kleimanhttp://wwww.themedreality.com
Raised in San Diego on theme parks, zoos, and IMAX films, Joe Kleiman would expand his childhood loves into two decades as a projectionist and theater director within the giant screen industry. In addition to his work in commercial and museum operations, Joe has volunteered his time to animal husbandry at leading facilities in California and Texas and has played a leading management role for a number of performing arts companies. Joe has been News Editor and contributing author to InPark Magazine since 2011. HIs writing has also appeared in Sound & Communications, LF Examiner, Jim Hill Media, and MiceChat. His blog, ThemedReality.com takes an unconventional look at the attractions industry. Follow on twitter @ThemesRenewed Joe lives in Sacramento, California with his fiancé, two dogs, and a ghost.
Share
Facebook
Twitter
Linkedin
Email
Print
WhatsApp
Pinterest
ReddIt
Tumblr
Previous articleLEGOLAND Florida Offers Parents Advice on Helping Kids Ride Their First Coasters
Next articleSouth Korea’s Largest Aquarium Is Highlight of EXPO 2012, Features Reynolds Polymer R-Cast Windows