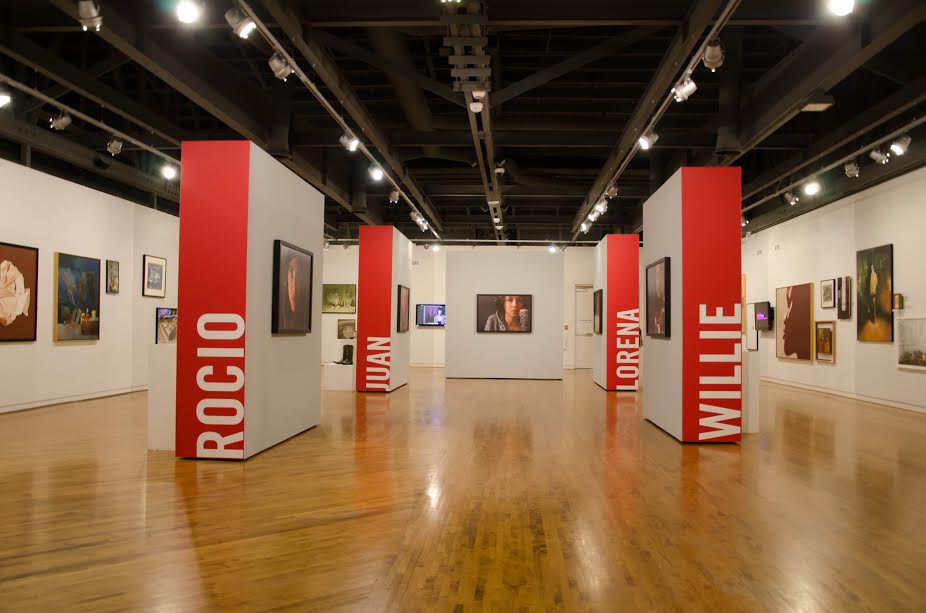 At the age of 15, my father crossed the border from his native Mexico, speaking only a few words of English. This transformative experience opened doors allowing him to achieve a Master’s degree in Public Administration and serve 25 years overseeing offices and programs for the State of California.

When the Themed Entertainment Association (TEA) announced the latest slate of Thea Award recipients in November 2016, a small art exhibition at the Museum of Latin American Art (MOLAA) in Long Beach, CA was among them. The exhibit, TRANSFORMATIONS, tells the stories of five people and that moment that transformed their lives, utilizing art from the museum’s collection. The Thea award will be formally presented April 22, 2017 at the TEA Thea Awards Gala.

Being the son of an immigrant, I was instantly drawn to know more about TRANSFORMATIONS and the week after the Thea announcement, found myself sitting in MOLAA’s café with Curator of Collections Carlos Ortega. Joining us for a discussion on the creation of the exhibit were Michael Delano of COTU Media, exhibit participants Juan Gonzalez and Lorena Mercado, and MOLAA docent Laura Siqueiros.

Throughout the years, art in exhibits I’ve visited has been grouped along parameters based on the art itself – the artist, the period (either when the work was produced or the period represented), movement, or style. TRANSFORMATIONS took a radically different approach to art – using it tell others’ stories. Because of this, in the bigger context, the exhibit was also about museums transforming how art is interpreted.

The genesis of the project was a photo series by famed New Zealand food photographer Henry Hargreaves, recreating the last meals of death row inmates. Upon seeing these photos, a concept began to take shape in Ortega’s mind, about overcoming tragedy and adversity and the individual’s connection to art.

Ortega had learned a lot about applying experience design to museum exhibits in past employment at BRC Imagination Arts. “When I was at BRC,” he said, “Bob Rogers [company founder] taught me the importance of telling a story in an exhibit.”

The five selected participants in TRANSFORMATIONS were asked to look at artwork in MOLAA’s permanent collection and select pieces that they felt relayed their emotions both before and after a major transformative event in their lives. To identify the participants, the Museum started out by asking 80 non-profits in the LA area to hand out a six-question questionnaire.  Museum members were also invited to fill one out.

From 100+ questionnaires received, Ortega and his team determined 10 potential candidates.  Each candidate was brought in for an interview with three members of staff, which allowed the sessions to remain intimate. Present for each interview was Michael Delano of the museum’s media production partner Cotu Media.

Once the final five were chosen, they then met with Delano for another interview, this one recorded on digital media for video playback in the exhibit. “It was really good having him there for the first interview,” says Lorena Mercado, one of the exhibit’s five participants, “I had already told him my story, so I felt very comfortable telling it to him again.”

Ortega pointed out that in most art exhibits, the curator receives much of the glory. In the case of TRANSFORMATIONS, the glory was, rather, the huge emotional connection between the public and the participants’ stories. With MOLAA being home to one of the most prestigious collections of contemporary Latin American art in North America, Ortega knew that the entire collection would be too large for the participants to work with, so he preselected works that he felt would portray the participant’s before and after experiences, 50 for each.  Then he asked 45 museum docents to select 100 works that had not been seen for a while.

Docents and interns involved in the project were not told the artwork would be used for the Transformations exhibit. “We didn’t want them to be biased. Other than a few people and the Education Department, everyone thought we were putting together a new exhibit of lesser shown art.” This didn’t sit well with one of the docents, Laura Siqueiros. “I was extremely upset when I found out it was going be used for something else. As an artist myself, that didn’t sit well with me. But I was very happy when I saw the final result.”

Two hundred fifty pieces were selected for each of the five finalists to review.  Each would visit five to six times to review the images – all reproduced on paper with no country, artist, or other information listed. They were asked to select at least 15 images apiece, representing the before and after periods of their transformative experience.

Participant Juan Gonzalez described the challenge he faced in selecting art.  “You have to understand that for 15 years, I was in a Federal prison,” he said. “For those 15 years, I didn’t see images like these.  All I saw were bars.”

For each of the five participants, the moment of transformation came in different ways. For Gonzalez, it was watching his children grow up on the other side while he was incarcerated and learning a new trade while in prison – leatherworking. Mercado is a cancer survivor, who tells of the hardship of losing her hair from chemotherapy and her breasts from a double mastectomy and interacting with those around her who understand and those who don’t. Willie Quinones escaped a rough childhood in the barrio by joining the Navy and seeing the world. Felicia Rivero ended up homeless on the streets as a teenager, doing what she could to survive. Eventually, she found her way to excelling in college. Another participant who found her way to college is Rocio Villalobos, who was paralyzed when shot during a carjacking in her native El Salvador, ending her plans to attend ballet school. Eventually, she found her way to the US, where she discovered her own way to dance.

TRANSFORMATIONS told each of stories not only through the museum’s art collection and the videos produced by Cotu Media. Each participant was invited to share personal belongings which were also on display in a table in the gallery. Juan’s items included photos of his children during his time incarcerated and samples of his leatherwork. A leather couch he designed celebrating civil rights leaders Cesar Chavez and Martin Luther King Jr. became the first item to be accepted into the museum’s permanent collection by a Chicano artist.

Other items on display included a wig and prosthetic breasts from Lorena, an El Salvadorean news article titled “Little Victims,” which includes a photo of Villalobos in the hospital, Quinones’ Navy uniform, and a heart pendant, the only remaining item in Rivero’s possession from before her time as a homeless youth. Click here for a full, illustrated list of participants’ personal items, courtesy MOLAA.

While each participant had their own section of the gallery, a sixth area was set aside as a lounge, where museum visitors could discuss what they had seen and share their own transformative moments. Renowned conceptual artist Kendell Carter was hired to design this area. Said Ortega, “The key of this exhibition was to create a space of true inclusiveness. Kendall’s line of work creates spaces that transcend cultures and borders. He was the perfect match for the concept of the exhibition and created a unique space that turned around the visitor from a mere spectator into the protagonist of the experience. His area had a comfortable and familiar space that resembled a cool living room, in which guests could share in a comfortable and intimate setting.”

To carry forth this concept of a shared humanity, Carter had artists from four different ethnicities create paintings, which he then cut into strips and wove together into a new and unique work. Within the lounge, necklaces with postcard-type images attached were placed on one side.  Guests were encouraged to place ones that spoke to them around their necks and to discuss how they related to their own story.

Laura Siqueiros, the museum’s docent, found this to be a brilliant move. “I saw school groups come through and there was something about seeing the stories in the exhibit and then choosing their own image, they started to talk. Even the shyest kids would start sharing or people who had known each other for a long time would share something they didn’t know with each other.” For those who didn’t share verbally, the necklace did the job of communicating and sharing a part of themselves.

Mercado found the exhibit to be the perfect medium for discussing her cancer with her daughter, while Gonzalez found it to be an eye-opening experience, changing his perception of what art is.

An active experience with universal themes

MOLAA is currently in talks that may lead to TRANSFORMATIONS becoming a traveling exhibition. Ortega believes more such exhibits are necessary. “This exhibition was about empowering the audience over the museum. Traditionally, exhibitions are created to provide meaning for the audience through the eyes of the artist. Like listening to the radio, the visitors become passive learners.

“In our exhibition, we reversed the roles and allowed visitors to give meaning to the art through their own life stories. The guests became the protagonists by using the art from our collection to illustrate their inspirational stories. The guest moved from being a passive listener to becoming an active protagonist.”

TRANSFORMATIONS is a story about all humans, as the stories it tells can be found everywhere, regardless of ethnicity or nationality.

Joe Kleimanhttp://wwww.themedreality.com
Raised in San Diego on theme parks, zoos, and IMAX films, Joe Kleiman would expand his childhood loves into two decades as a projectionist and theater director within the giant screen industry. In addition to his work in commercial and museum operations, Joe has volunteered his time to animal husbandry at leading facilities in California and Texas and has played a leading management role for a number of performing arts companies. Joe has been News Editor and contributing author to InPark Magazine since 2011. HIs writing has also appeared in Sound & Communications, LF Examiner, Jim Hill Media, and MiceChat. His blog, ThemedReality.com takes an unconventional look at the attractions industry. Follow on twitter @ThemesRenewed Joe lives in Sacramento, California with his fiancé, two dogs, and a ghost.
Share
Facebook
Twitter
Linkedin
Email
Print
WhatsApp
Pinterest
ReddIt
Tumblr
Previous articleEXPO Timeline
Next articlePixomondo Completes Live Action Shoot of Harbin Ice and Snow Festivals for Wanda Flying Theater