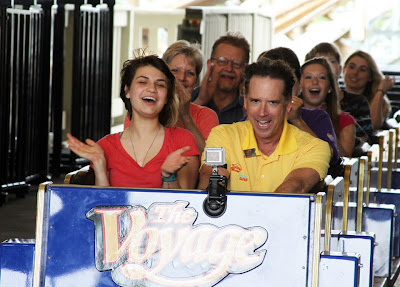 Santa Claus, IN, USA — For the second time this week, a ride at Holiday World will be featured on a new show on the Travel Channel.

The Voyage will be among four wooden roller coasters on Sunday’s episode of “Insane Coaster Wars.” A production crew from Travel Channel visited Holiday World for two days in early May to shoot footage of Voyage and the park.

Voyage has been voted the #1 Wooden Roller Coaster on the Planet every year since 2007. This 1.2-mile coaster offers more “air time” than any other wooden coaster in the world. Voyage was featured in the “Wood Takes a Thrilling Turn” cover story of last week’s New York Times’ science section.

In advance of the show, fans were encouraged to vote for their favorite wooden coaster last month on Travel Channel’s website; the winning coaster will be announced at the end of the “Splintering Speedsters” episode, which premieres Sunday, July 15, at 7:00pm CT. It will air again next Thursday, Friday and Sunday.

Meanwhile, Holiday World’s Pilgrims Plunge is included in an episode of “Xtreme Water Parks” airing on the Travel Channel at 9:30pm CT on Thursday, July 12, and again at 1:30pm CT on Saturday, July 14. Pilgrims Plunge, the world’s tallest water ride, is a classic “shoot the chute” ride, featuring an open-air elevator which lift boats filled with riders 135 feet in the air.

An August episode of “Xtreme Water Parks” will include the park’s two water coasters, Wildebeest and Mammoth.

The Travel Channel is available in nearly 96 million U.S. households.

For more information about the parks, named the #1 Water Park in the Nation by TripAdvisor.com, visit HolidayWorld.com or call 1-877-Go-Family .

Joe Kleimanhttp://wwww.themedreality.com
Raised in San Diego on theme parks, zoos, and IMAX films, InPark's Senior Correspondent Joe Kleiman would expand his childhood loves into two decades as a projectionist and theater director within the giant screen industry. In addition to his work in commercial and museum operations, Joe has volunteered his time to animal husbandry at leading facilities in California and Texas and has played a leading management role for a number of performing arts companies. Joe previously served as News Editor and has remained a contributing author to InPark Magazine since 2011. HIs writing has also appeared in Sound & Communications, LF Examiner, Jim Hill Media, The Planetarian, Behind the Thrills, and MiceChat His blog, ThemedReality.com takes an unconventional look at the attractions industry. Follow on twitter @ThemesRenewed Joe lives in Sacramento, California with his wife, dog, and a ghost.
Share
Facebook
Twitter
Linkedin
Email
Print
WhatsApp
Pinterest
ReddIt
Tumblr
Previous articleUniversal and Loews Bringing Fourth Resort Hotel to Universal Orlando
Next articleOne Intamin Hyper Splash Opens While Another Goes On Temporary Shutdown