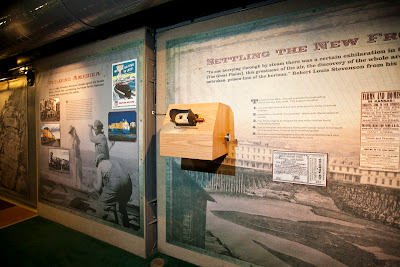 Council Bluffs, IA, USA (March 22, 2012) /PRNewswire-FirstCall/ — The Union Pacific Railroad Museum is taking its Building America exhibit on the road, or at least out on the rails. The Promontory, a Union Pacific Railroad 1962-vintage baggage car, has been transformed into a state-of-the-art traveling museum. Complete with 13 large, dramatic graphics and the latest in interactive touch video screen technology, the Promontory will immerse visitors in Union Pacific’s 150-year history.

The traveling exhibit is a smaller version of the Building America exhibit that will open at the Union Pacific Railroad Museum in Council Bluffs, Iowa, on May 12, 2012.

Traveling exhibit visitors will have an opportunity to interact with history via a 65-inch touch video screen highlighting many of the 27 communities the car will be visiting in 2012. The video screen features an interactive map showing the Union Pacific system from 1869 to the present. The 150-year railroad timeline, from 1862 to present, also is available in a touch screen kiosk.

Several artifacts from the Union Pacific Railroad Museum will be on display, including:

The Promontory was built in 1962 by the St. Louis Car Company as postal storage car No. 5779. It is the newest car in Union Pacific’s Heritage Passenger Fleet and was renamed the Promontory in 1993. The car has carpeted walls that have enabled it to be used for displays on various special trains and at community celebrations. When not in use for displays, it is often equipped as an exercise car for long trips.

This car is named for Promontory Summit, Utah, just north of Great Salt Lake and the site selected for the joining of the Union Pacific and Central Pacific Railroads. Completion of the railroad–the greatest engineering feat of the 19th century–culminated in a celebration there on May 10, 1869. Promontory Point, often erroneously referred to as the location for the ceremony, juts out into the lake itself. It was the location of a saltworks for many years.

When Edward Harriman began the great rebuilding of the Harriman lines just after the turn of the century, the Lucin Cutoff was built across the Great Salt Lake, bypassing the original line through Promontory Summit. This was designed to move trains across Utah much faster and eliminate the old line around the northern edge of the lake. Promontory Point touches the Lucin Cutoff, and one of the steamboats used during its construction was named Promontory. The original transcontinental line through Promontory was taken up for scrap in 1942.

ABOUT THE UNION PACIFIC RAILROAD MUSEUM
Visitors to the Union Pacific Railroad Museum journey through more than 150 years of American history while viewing one of the oldest corporate collections in the nation. Housed in the historic Carnegie Library building in Council Bluffs, Iowa, visitors discover an extensive compilation of artifacts, photographs, documents and equipment from our nation’s most ambitious endeavors – constructing the transcontinental railroad and settling the West, simultaneously chronicled in museum exhibits. Among the most popular museum exhibits are the transcontinental railroad’s construction; “America Travels by Rail,” which celebrates the height of passenger travel; the Lincoln Collection, featuring artifacts from President Abraham Lincoln’s rail car and funeral; and the technology and innovation that sustain Union Pacific as a railroad industry leader. The Union Pacific Railroad Museum also promotes a sense of connectedness shared by generations of people whose personal and family histories have been touched by the railroad.

ABOUT UNION PACIFIC
It was 150 years ago that Abraham Lincoln signed the Pacific Railway Act of July 1, 1862, creating the original Union Pacific. One of America’s iconic companies, today, Union Pacific Railroad is the principal operating company of Union Pacific Corporation (NYSE: UNP), linking 23 states in the western two-thirds of the country by rail and providing freight solutions and logistics expertise to the global supply chain. From 2000 through 2011, Union Pacific spent more than $31 billion on its network and operations, making needed investments in America’s infrastructure and enhancing its ability to provide safe, reliable, fuel-efficient and environmentally responsible freight transportation. Union Pacific’s diversified business mix includes Agricultural Products, Automotive, Chemicals, Energy, Industrial Products and Intermodal. The railroad serves many of the fastest-growing U.S. population centers and emphasizes excellent customer service. Union Pacific operates competitive routes from all major West Coast and Gulf Coast ports to eastern gateways, connects with Canada’s rail systems and is the only railroad serving all six major Mexico gateways. www.up.com

Joe Kleimanhttp://wwww.themedreality.com
Raised in San Diego on theme parks, zoos, and IMAX films, InPark's Senior Correspondent Joe Kleiman would expand his childhood loves into two decades as a projectionist and theater director within the giant screen industry. In addition to his work in commercial and museum operations, Joe has volunteered his time to animal husbandry at leading facilities in California and Texas and has played a leading management role for a number of performing arts companies. Joe previously served as News Editor and has remained a contributing author to InPark Magazine since 2011. HIs writing has also appeared in Sound & Communications, LF Examiner, Jim Hill Media, The Planetarian, Behind the Thrills, and MiceChat His blog, ThemedReality.com takes an unconventional look at the attractions industry. Follow on twitter @ThemesRenewed Joe lives in Sacramento, California with his wife, dog, and a ghost.
Share
Facebook
Twitter
Linkedin
Email
Print
WhatsApp
Pinterest
ReddIt
Tumblr
Previous articleSodexo Adds National Zoo to Growing List of AZA Member Parks
Next articleRed River Zoo Holding Northern Wildlife Film Festival