Universal Hollywood Rings In Grinchmas by Honoring Fran Drescher as "Who-manitarian" of the Year; CityWalk to Celebrate Holidays with LED Animations 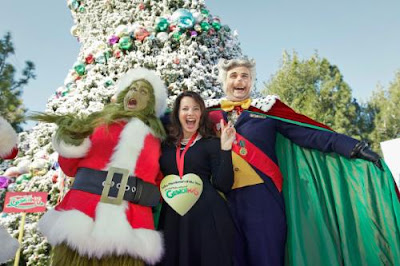 Fran Drescher, star of the hit television series, “Happily Divorced,” is President and Founder of the Cancer Schmancer Movement, a non-profit organization dedicated to ensuring all women’s cancers are diagnosed in Stage 1, when they are most curable. The Foundation also serves as a cancer awareness and educational platform, and advocates for improved women’s cancer healthcare legislation.

The family-friendly “Grinchmas” celebration will ring in a jolly Who-liday season with The Grinch™, Max the dog, tons of fresh snow and nightly celebrity readings of the Dr. Seuss classic, “How the Grinch Stole Christmas.” A whimsical, curving “Grinchmas” tree will tower 60 feet above the center of a snow-covered winter wonderland and will be lit in nightly ceremonies that will feature a colorfully costumed Who-ville choir caroling and spreading holiday cheer. The Grinch™ and Max will star with the Whos in these enchanting Who-bilation performances.

Prior to select “Who-bilations” and tree-lightings, celebrities from the worlds of film, television and music will take the stage to help Universal Studios Hollywood celebrate “Grinchmas” as they share their entertaining interpretations of the heart-warming tale of “How the Grinch Stole Christmas.”

Throughout “Grinchmas,” The Grinch™, Max and the Who-ville Whos will be on hand to meet fans and take memorable holiday photos, while families gather to enjoy traditional winter fun, romping together in a playground of real snow, made fresh daily, and building their own Southern Californian snowmen.

“Grinchmas” will also provide fans of the blockbuster movie a close-up view of the original Who-ville film sets, featured in the “Dr. Seuss’ How the Grinch Stole Christmas” movie, aboard the behind-the-scenes Studio Tour. As the tram rolls to a stop amid the fanciful Who-ville buildings, guests will experience a performance by a Whos Who of Who-ville re-enacting favorite scenes and songs from the film.”

Now through December 31, the spirit of the holiday transforms Universal CityWalk®, as the new high-tech, outdoor concert arena, “5 Towers” comes alive with the sights and sounds of cheerful holiday music, choreographed in unison to hundreds of thousands of twinkling LED lights illuminating the venue.

Joe Kleimanhttp://wwww.themedreality.com
Raised in San Diego on theme parks, zoos, and IMAX films, InPark's Senior Correspondent Joe Kleiman would expand his childhood loves into two decades as a projectionist and theater director within the giant screen industry. In addition to his work in commercial and museum operations, Joe has volunteered his time to animal husbandry at leading facilities in California and Texas and has played a leading management role for a number of performing arts companies. Joe previously served as News Editor and has remained a contributing author to InPark Magazine since 2011. HIs writing has also appeared in Sound & Communications, LF Examiner, Jim Hill Media, The Planetarian, Behind the Thrills, and MiceChat His blog, ThemedReality.com takes an unconventional look at the attractions industry. Follow on twitter @ThemesRenewed Joe lives in Sacramento, California with his wife, dog, and a ghost.
Share
Facebook
Twitter
Linkedin
Email
Print
WhatsApp
Pinterest
ReddIt
Tumblr
Previous articlePhiladelphia: Franklin Institute double premiere: Giant Mysterious Dinosaurs exhibit and "Flying Monsters" 3D giant screen movie
Next articlePGAV Destinations Completes Major Attraction Projects in 2011