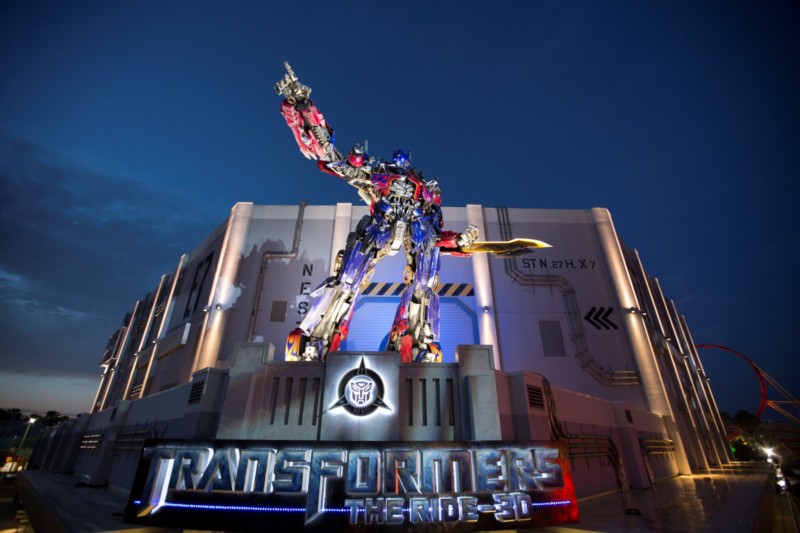 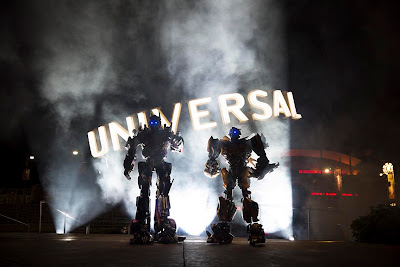 Universal Orlando Resort announced that its next blockbuster attraction will be the widely-popular TRANSFORMERS: The Ride – 3D. The groundbreaking ride – created under license from Hasbro, Inc. and based on its iconic TRANSFORMERS brand – will bring the intergalactic battle between the Autobots and the Decepticons to Universal Studios Florida in summer 2013.

Already a “must-see” at Universal Studios Singapore and Universal Studios Hollywood, TRANSFORMERS: The Ride – 3D is a mind-blowing, action-packed ride experience that you have to see to believe. You will come face to face with Megatron. You will dodge explosions and attacks by the Decepticons. You will fight to save mankind alongside Optimus Prime and the Autobots. It will be the greatest battle you’ll ever ride.

Universal worked closely with Michael Bay, the award-wining director of the “TRANSFORMERS” film series and the ride’s creative consultant, to create an authentic experience that brings the non-stop action of the films to life. The attraction combines the larger-than-life TRANSFORMERS characters and an exciting storyline with life-like HD CGI media, state-of-the-art 3-D technology and amazing special effects to place riders right in the middle of an epic battle between good and evil.

“We broke the mold and have taken this ride to a new technological level in terms of blending seamless 3-D,” said Michael Bay, director of the “TRANSFORMERS” films.

“TRANSFORMERS: The Ride – 3D is the perfect addition to Universal Orlando’s thrilling theme park experiences,” said Mark Woodbury, president of Universal Creative. “The ride has already proven to be a hit at our Hollywood and Singapore parks, and we’re excited that Universal Orlando guests will soon be able to join the Autobots in the fight to save the world.”

TRANSFORMERS films, television shows and merchandise have captivated millions of people all over the world. To date, three blockbuster films have been released – “TRANSFORMERS” (2007), “TRANSFORMERS: REVENGE OF THE FALLEN” (2009) and “TRANSFORMERS: DARK OF THE MOON” (2011) – grossing more than $2 billion combined worldwide at the box office. The three films were directed by Michael Bay, executive produced by Steven Spielberg and released by Paramount Pictures.

About Universal Orlando Resort
There are many ways to enjoy your Orlando vacation, but there is only one place where vacation becomes adventure: Universal Orlando Resort. It is a unique destination featuring two theme parks, three magnificently themed on-site hotels and a nighttime entertainment complex. It’s the only Orlando destination where you are not just entertained – you become part of the most exhilarating entertainment ever created. You can soar above Hogwarts with Harry Potter, swing above the streets with Spider-Man, be transformed into a banana-loving minion in the hilarious and heartwarming Despicable Me Minion Mayhem ride and help Shrek save Princess Fiona in Shrek 4-D. Universal Orlando Resort is an NBCUniversal company.

About Hasbro
Hasbro, Inc. (NASDAQ: HAS) is a branded play company providing children and families around the world with a wide-range of immersive entertainment offerings based on the Company’s world class brand portfolio. From toys and games, to television programming, motion pictures, digital gaming and a comprehensive licensing program, Hasbro strives to delight its global customers with well-known and beloved brands such as TRANSFORM’s Hasbro Studios develops and produces television programming for markets around the world. The Hub TV Network is part of a multi-platform joint ventureERS, LITTLEST PET SHOP, NERF, PLAYSKOOL, MY LITTLE PONY, G.I. JOE, MAGIC: THE GATHERING and MONOPOLY. The Company between Hasbro and Discovery Communications (NASDAQ: DISCA, DISCB, DISCK), in the U.S. Through the company’s deep commitment to corporate social responsibility, including philanthropy, Hasbro is helping to build a safe and sustainable world for future generations and to positively impact the lives of millions of children and families every year. It has been recognized for its efforts by being named one of the “World’s Most Ethical Companies” and is ranked as one of Corporate Responsibility Magazine’s “100 Best Corporate Citizens.”

Joe Kleimanhttp://wwww.themedreality.com
Raised in San Diego on theme parks, zoos, and IMAX films, InPark's Senior Correspondent Joe Kleiman would expand his childhood loves into two decades as a projectionist and theater director within the giant screen industry. In addition to his work in commercial and museum operations, Joe has volunteered his time to animal husbandry at leading facilities in California and Texas and has played a leading management role for a number of performing arts companies. Joe previously served as News Editor and has remained a contributing author to InPark Magazine since 2011. HIs writing has also appeared in Sound & Communications, LF Examiner, Jim Hill Media, The Planetarian, Behind the Thrills, and MiceChat His blog, ThemedReality.com takes an unconventional look at the attractions industry. Follow on twitter @ThemesRenewed Joe lives in Sacramento, California with his wife, dog, and a ghost.
Share
Facebook
Twitter
Linkedin
Email
Print
WhatsApp
Pinterest
ReddIt
Tumblr
Previous articleCan you DIGSS It?
Next articleVIDEO: Transformers Announcement, Universal Studios Florida