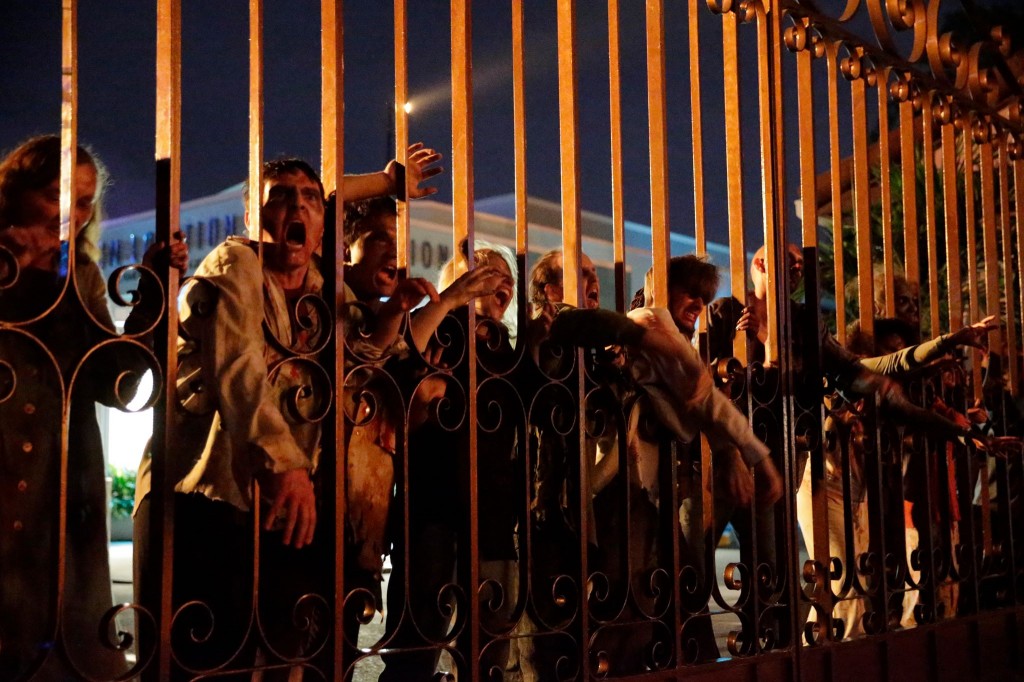 • The Walking Dead: No Safe Haven
Walk in the footsteps of the survivors as Season 3 of AMC’s horror hit relentlessly attacks you from all sides. Stay alert as walkers could trap you anywhere along your journey from the town of Woodbury to the claustrophobic confines of the derelict prison.
• Resident Evil: Escape from Raccoon City
Raccoon City is overrun with Umbrella Corporation’s most terrifying experiments—and the only option is complete destruction. You’ll need to duck and dodge Lickers, Hunters, and Nemesis himself if you have any chance of escaping Capcom’s video game terrors before missiles send everything back to hell.
• Evil Dead
Relive “The Most Terrifying Film You Will Ever Experience” as gruesome Deadites try to possess your soul. There is nowhere to hide as every creaking floor board and tangled vine is ready to pull you down, making you one with the Evil Dead.
• The Cabin in the Woods
Experience a live recreation of the film that ripped the horror genre inside out. Beneath the cabin’s rustic appearance lies a secret facility that unleashes terrifying beings that you thought only existed in nightmares.
• An American Werewolf in London
Based on the John Landis horror classic, you’ll travel to the Slaughtered Lamb, experience the gruesome wolf attack on the moors, and live the chaos of Piccadilly Circus. Beware the moon because tonight it brings only death.
• Urban Legends: La Llorona
She is known as the weeping woman. To hear her mournful cries sends chills colder than the murky, watery depths she drowned her children in. Forced to eternally walk the earth, she seeks others to share her pain and suffering, now and forever.
• Afterlife: Death’s Vengeance
Serial killer, Bobby “The Blade” Galletta, is about to meet Ole’ Sparky. 2000 volts are going to send him into a horrific realm of pain and suffering. His victims are bound to turn Bobby’s afterlife into an unimaginable and infernal torment.
• Havoc2: Derailed
Hang on tight aboard a militaristic train convoy that is secretly transporting the “Dogs of War”—a genetically engineered super soldier outfit. These bloodthirsty maniacs are only bent on mayhem and destruction of a speeding train. This is Havoc!

For the first time ever, The Walking Dead has overtaken the streets of Universal Studios. From Atlanta through the forests and onto Woodbury, you’ll have to fight your way through some of the most iconic locations in the show if you want to survive the night.

SHOWS
• Bill & Ted’s Excellent Halloween Adventure
Party on as those two most excellent dudes return to skewer the biggest stories of the past year with the biggest names in pop culture.
• Rocky Horror Picture Show – A Tribute
Let’s do the Time Warp again! Rock out to clips from the classic cult film with your favorite Transvestite, live tribute performers, and audience participants.

Joe Kleimanhttp://wwww.themedreality.com
Raised in San Diego on theme parks, zoos, and IMAX films, InPark's Senior Correspondent Joe Kleiman would expand his childhood loves into two decades as a projectionist and theater director within the giant screen industry. In addition to his work in commercial and museum operations, Joe has volunteered his time to animal husbandry at leading facilities in California and Texas and has played a leading management role for a number of performing arts companies. Joe previously served as News Editor and has remained a contributing author to InPark Magazine since 2011. HIs writing has also appeared in Sound & Communications, LF Examiner, Jim Hill Media, The Planetarian, Behind the Thrills, and MiceChat His blog, ThemedReality.com takes an unconventional look at the attractions industry. Follow on twitter @ThemesRenewed Joe lives in Sacramento, California with his wife, dog, and a ghost.
Share
Facebook
Twitter
Linkedin
Email
Print
WhatsApp
Pinterest
ReddIt
Tumblr
Previous article
Magic Kingdom: Mickey’s Not-So-Scary Halloween Party
Next article
LEGOLAND Calfornia Resort – Brick-or Treat