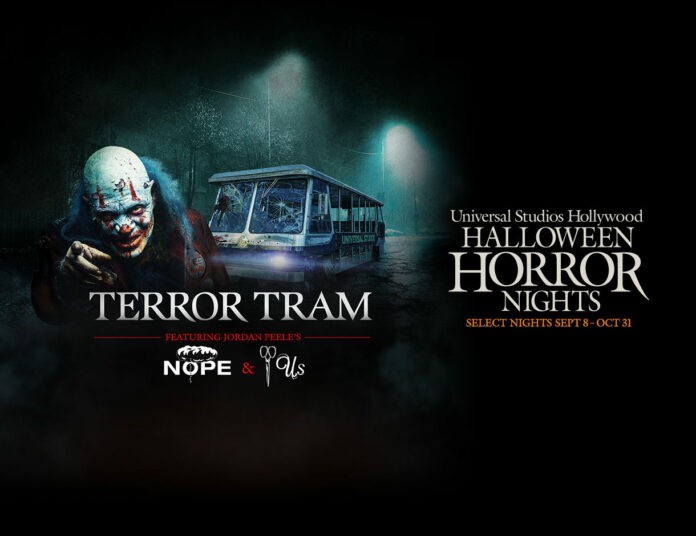 Announced on August 19th – 2022’s iconic “Terror Tram” expands to include a cinematic twist on Jordan Peele’s blockbuster films in a crossover experience that reimagines Us, featuring The Tethered, a revolutionary army of vengeful doppelgängers, whose uprising invades the all-new Jupiter’s Claim set from the filmmaker’s latest pop nightmare, Nope, as part of Halloween Horror Nights at Universal Studios Hollywood, which kicks off on Thursday, September 8, 2022.

The “Terror Tram” is unique to Universal Studios Hollywood, inviting guests to explore on foot parts of the famous movie studio back lot, home to some of the most notorious movie sets. Once guests disembark the Tram, the terror is unleashed. This year, the villainous Hollywood Harry unravels “Hollywood Harry’s Halloween,” a nightmarish spectacle with a demented cast of characters that winds past the iconic Psycho House then through Steven Spielberg’s War of the Worlds set.  As guests make their way through a choreographed massacre at the Jupiter’s Claim set from Nope, they will encounter The Tethered from Us in a frightening finale of epic proportions. After the success of the 2019 “Us” house, this experience will feature all-new choreography by conceptual artist and choreographer Madeline Hollander.

All-new scare zones will taunt and torment guests as they navigate the darkness from one terrifying house to the next: