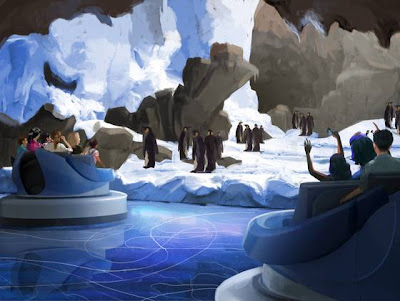 Orlando, FL, USA (November 13, 2012) — SeaWorld Orlando, in conjunction with Oceaneering Entertainment Systems (Booth #1054), on Tuesday showcased for the first time the new ride vehicle that will be used in SeaWorld’s “Antarctica: Empire of the Penguin” attraction, due out spring 2013.

SeaWorld officials said the eight-passenger vehicle (two rows of four) is a brand- new concept for the industry.

“This is the world’s first motion-based, completely trackless ride-simulation technology,” said Brian Morrow, creative director for SeaWorld Parks & Entertainment. “Riders are able to make a choice along the ride experience between intense and non-intense.”

SeaWorld is still keeping broader details about the ride experience under wraps, but Morrow said there will be multiple programs loaded into the ride vehicle that will provide “a wide range of unpredictability.” He continued: “Inside those different ride paths, there are various things you may or may not see each time.”

The ride will be part of a larger “realm” that re-creates the glacial rift of Antarctica, Morrow said.“This is not a dark ride—in fact, we don’t know what to call it. We made up some words, but we stopped using them because they didn’t make sense,” he joked. “We’re doing something that’s never been done in the industry. This ride is all around you. It’s not scene by scene; it’s world by world.”  More details can be found in the attached release and at SeaWorldOrlando.com/ANTARCTICA.  Visit www.oceaneering.com for more on Oceaneering.

Joe Kleimanhttp://wwww.themedreality.com
Raised in San Diego on theme parks, zoos, and IMAX films, InPark's Senior Correspondent Joe Kleiman would expand his childhood loves into two decades as a projectionist and theater director within the giant screen industry. In addition to his work in commercial and museum operations, Joe has volunteered his time to animal husbandry at leading facilities in California and Texas and has played a leading management role for a number of performing arts companies. Joe previously served as News Editor and has remained a contributing author to InPark Magazine since 2011. HIs writing has also appeared in Sound & Communications, LF Examiner, Jim Hill Media, The Planetarian, Behind the Thrills, and MiceChat His blog, ThemedReality.com takes an unconventional look at the attractions industry. Follow on twitter @ThemesRenewed Joe lives in Sacramento, California with his wife, dog, and a ghost.
Share
Facebook
Twitter
Linkedin
Email
Print
WhatsApp
Pinterest
ReddIt
Tumblr
Previous article
World’s First Powered-Launch Zipline Slated for Las Vegas’ Fremont Street
Next article
UPDATED: 2013 Thea Awards Recipients Announced