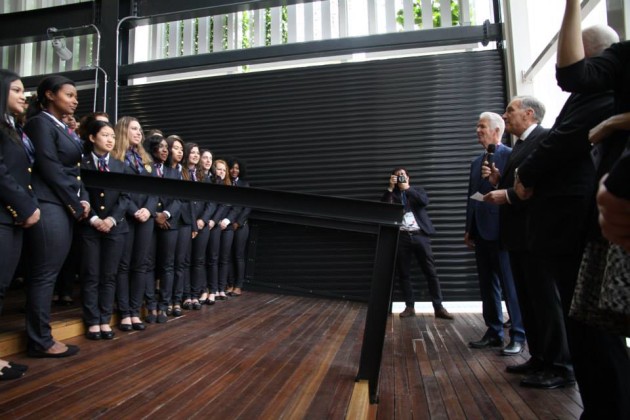 [quote]Over the next six months, our pavilion, ‘American Food 2.0 – United to Feed the Planet,’ will celebrate America’s contribution to global food security and will serve as a platform to address global issues, all the while introducing Expo’s visitors to the rich diversity of American cuisine. We do hope that many American visitors will travel to Milan to see the USA Pavilion and the Food Truck Nation and be proud of it.” — United States Ambassador to Italy John R. Phillips[/quote] 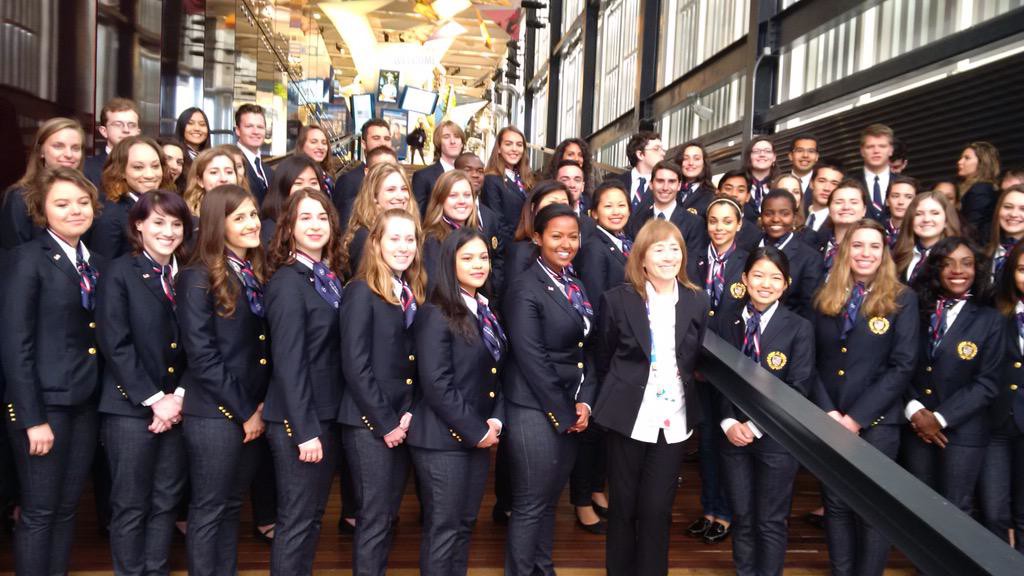 A central component of the ceremony featured the U.S. Student Ambassadors; representing 94 American universities and serving as docents of the USA Pavilion, the students greeted visitors upon their arrival and guided them on a journey through state-of-the-art spaces.  Seeing the pavilion’s 7,200 square-foot vertical farm, American Food 2.0 exhibits and SmartGlass roof, visitors were introduced to the innovation, science and technology at work in the United States to develop solutions for global food security and sustainability.

Also opening its doors to Expo goers was the USA’s Food Truck Nation, located just a few paces away from the pavilion. This one-of-a-kind, edible exhibit features a series of food trucks offering regional American street food such as vegetarian hamburgers and lobster rolls. Those interested in getting a more gourmet taste of American Food 2.0 can reserve a seat at the James Beard American Restaurant at Seven Stars Galleria, located in the heart of Milan inside the historic Galleria Vittorio Emanuele II. Serving as the centerpiece of the USA Pavilion’s culinary programming, the highly-anticipated restaurant features a rotating roster of renowned American and Italian guest chefs offering deluxe five-course meals. For reservations and the complete calendar of chefs, visit www.usapavilion2015.net/schedule. 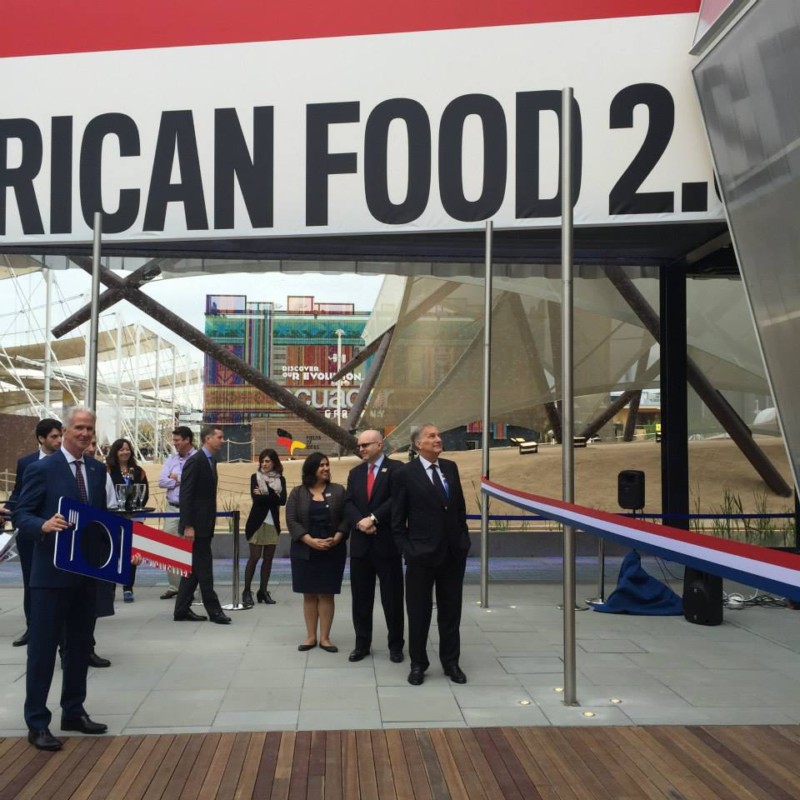 The USA Pavilion’s grand opening ceremony also included a performance by the United States Marine Corps Color Guard, followed by the United States national anthem and remarks from several U.S. dignitaries, including U.S. Consul General to Milan Philip Reeker and Ambassador Douglas Hickey, Commissioner General of the USAPavilion at EXPO 2015.  The evening continued with a private reception on the pavilion’s rooftop terrace, where sponsors, partners, U.S. government officials, and other special guests gathered for a special celebration toast.

“As United States Consul General in Milan, I am particularly proud to be here today at the opening of this global conversation. Milan is the place to be this year, and now you can see why. 2015 is also the year that the U.S. Consulate General in Milan celebrates its 150th anniversary. The Expo certainly makes a great birthday party, and this USA Pavilion is a birthday present we’re proud to share with you all!” U.S. Consul General to Milan, Ambassador Reeker said. 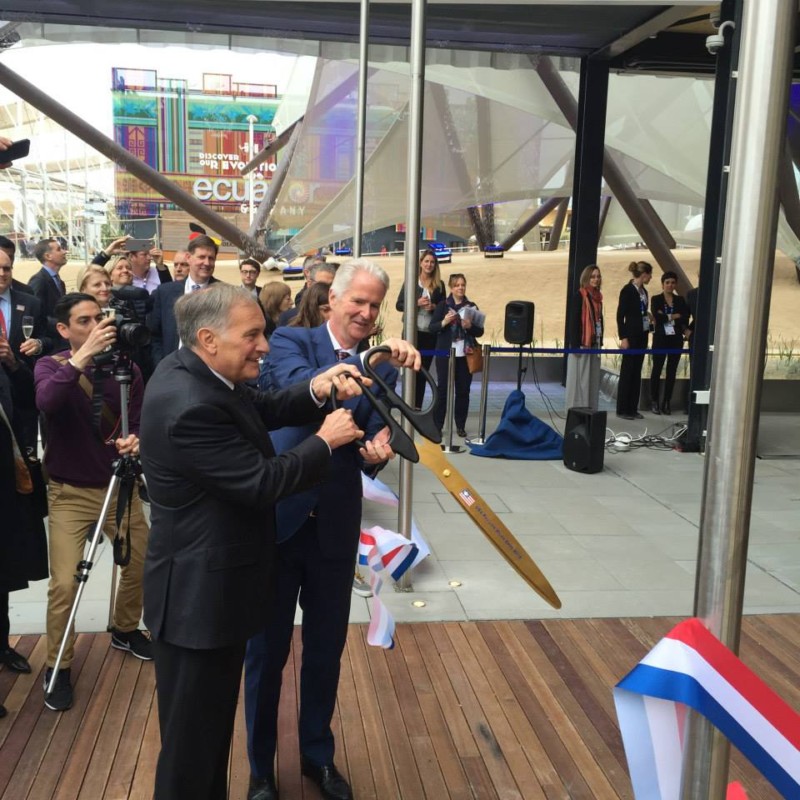 Ambassador Douglas Hickey, Commissioner General of the USA Pavilion, stated: “We are pleased to welcome visitors from across the world to the USA Pavilion at Expo Milano 2015. Focusing on innovation and technology, our pavilion will demonstrate the United States’ dedication to food security. We hope to engage visitors with our story and encourage open dialogue on the food issues impacting all of us. We especially look forward to convening with other country pavilions at Expo so we can together develop innovative solutions for feeding 9 billion nutritiously and sustainably.”

Joe Kleimanhttp://wwww.themedreality.com
Raised in San Diego on theme parks, zoos, and IMAX films, InPark's Senior Correspondent Joe Kleiman would expand his childhood loves into two decades as a projectionist and theater director within the giant screen industry. In addition to his work in commercial and museum operations, Joe has volunteered his time to animal husbandry at leading facilities in California and Texas and has played a leading management role for a number of performing arts companies. Joe previously served as News Editor and has remained a contributing author to InPark Magazine since 2011. HIs writing has also appeared in Sound & Communications, LF Examiner, Jim Hill Media, The Planetarian, Behind the Thrills, and MiceChat His blog, ThemedReality.com takes an unconventional look at the attractions industry. Follow on twitter @ThemesRenewed Joe lives in Sacramento, California with his wife, dog, and a ghost.
Share
Facebook
Twitter
Linkedin
Email
Print
WhatsApp
Pinterest
ReddIt
Tumblr
Previous articleEXPO 2015 Architecture: National Pavilions A-M
Next articleRegistration Open For 2015 European Attractions Show in Gothenburg, Sweden