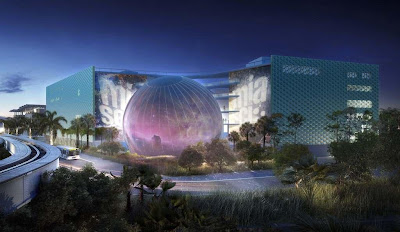 Brighton, UK, 17 July 2012 – With the ground-breaking ceremony for the new building at the Patricia and Philip Frost Museum of Science having taken place, independent technology consultancy Visual Acuity has started working on the next phase of a project that looks set to capture the imagination of the architectural, technology and audiovisual communities worldwide. Formerly the Miami Science Museum, the new museum is on track to open in 2015.


At InfoComm 2012 in Las Vegas the technology design team met with the major technology suppliers and integrators to brief them on the project and to explain the innovative link between the building, its exhibits and its users which is to be enabled by network based technologies.


A partly open-air structure designed by Grimshaw Architects, the new building will be home to science galleries, a learning center, a planetarium, energy playground and a‘living core’ aquarium and wildlife centre containing a microcosm of South Florida’s animal, fish and plant species. The core design concept is the ‘building as exhibit’, and Grimshaw’s design is a ‘living building’ – one that changes physically and visibly in response to the environment, events and the mood of Miami.


The construction project is supported by Miami Dade’s Building Better Communities Bond Program, The 4 acre site in a waterfront park is provided by the City of Miami. The private fundraising campaign has resulted in a $35 million commitment from Philip and Patricia Frost to name the building. Funding commitments have also been received from John S. and James L. Knight Foundation, the U.S. Department of Energy and private donors.


Visual Acuity has been working on the design and development of the building’s core technologies for over a year, drawing up specifications for IT networks, WiFi, distributed antennae, ticketing, digital signage and more.


“Working together with Grimshaw, our aim is for the building to be fully intelligent, with networked systems that can be operated remotely from anywhere in the building,” explains Blair Parkin, MD of Visual Acuity. “As well as its symbolic significance, the ground-breaking ceremony is important to us because it signals the next phase of the project – the preparation of technical systems and opening discussions with the technology supply community.”


Also working with Visual Acuity on the project is Oakland, California based Teecom, a consultancy that specializes in the creation of built environments that are socially and technologically compelling for the people that work in them and use them. And as well as a strong emphasis on cutting-edge technology, the building will also have impeccable environmental credentials, with the goal of attaining a LEED platinum rating when the project is complete.


“High-performance ventilation and air-conditioning systems are being designed to provide comfort while using the minimum amount of energy,” says Parkin, “and the building will be crowned by a vegetated roof.


A newly constructed wetland is being developed adjacent to the building to ensure efficient control of storm-water runoff and to enhance the biodiversity of the site overall.


“We are delighted to be working with Visual Acuity on the delivery of a building that we believe will take the museum-going experience to a completely new level,” says Gillian Thomas, President and CEO of the museum. “Our aim is to make sure that every aspect of the building, its infrastructure, programs and services offers an opportunity for enjoyable learning, highlights innovation and opens doors to new careers for the future.”


“When complete in 2015, this building will comprise over 250,000 square feet of some of the most original and inspiring uses of new technology seen at any visitor attraction anywhere in the world. This will make huge demands of our entire supply chain but we believe that the courage, intelligence and insight of Visual Acuity will help to ensure a successful end product.”


Damian Andrews, Visual Acuity lead consultant for the project: “I attended the ground-breaking ceremony and it was a great occasion, with great supporters and great enthusiasm among the Miami public as well. This has already been a fascinating project to contribute to and we look forward to two further years of technologically challenging but ultimately very rewarding work at the MiamiScience Museum site.”

Joe Kleimanhttp://wwww.themedreality.com
Raised in San Diego on theme parks, zoos, and IMAX films, InPark's Senior Correspondent Joe Kleiman would expand his childhood loves into two decades as a projectionist and theater director within the giant screen industry. In addition to his work in commercial and museum operations, Joe has volunteered his time to animal husbandry at leading facilities in California and Texas and has played a leading management role for a number of performing arts companies. Joe previously served as News Editor and has remained a contributing author to InPark Magazine since 2011. HIs writing has also appeared in Sound & Communications, LF Examiner, Jim Hill Media, The Planetarian, Behind the Thrills, and MiceChat His blog, ThemedReality.com takes an unconventional look at the attractions industry. Follow on twitter @ThemesRenewed Joe lives in Sacramento, California with his wife, dog, and a ghost.
Share
Facebook
Twitter
Linkedin
Email
Print
WhatsApp
Pinterest
ReddIt
Tumblr
Previous articleSATE 2012 Celebrates Cultural Diversity in Experience Design
Next articleBe featured in InPark Magazine!