The origins of a California-themed park concept, though perhaps not oulined in marketing collateral, are tied into the state’s sesquicentennial and it was an easy theme on which to design a park on a budget.

In early 2002, CalTIA, now known as the California Travel Association, held an event at Sacramento’s Esquire IMAX Theatre for travel industry professionals. They screened a rough cut of the IMAX film Adventures in Wild California, the official motion picture of the state’s 150th anniversary celebration. Wild California (its working title at the time) was underwritten by a number of California corporations, including The Walt Disney Company. In return for Disney’s investment, viewers could witness an IMAX-sized Walt on the giant screen introducing his Anaheim Park and ride Big Thunder Mountain Railroad with Roy E. Disney.

The Disneyland Resort sponsored the Sacramento screening and used it as one of the first official introductions of the new resort and its California Adventure park to the travel industry. Outside the theater, at a private reception under the stars, salads and chowder with Boudin sourdough bread, enchiladas made with Mission tortillas, and glasses of Robert Mondavi wine could be enjoyed, with each food station featuring a concept painting of that company’s respective California Adventure “attraction.”

Whether or not Disney intended to get sesquicentennial funding from the state for its new park is unknown on this end. What is known is that a broadly open theme such as “California” fell right into the micromanagers’ hands at a time when penny pinching theme park executives where pushing Primevil Whirl and Triceratops Spin as the next big things. A combination of off the shelf rides with minimal thematic coverings and corporate sponsored “attractions” likening to a grander version of Innovations would dramatically reduce construction costs. Unfortunately, they would also dramatically reduce attendance. 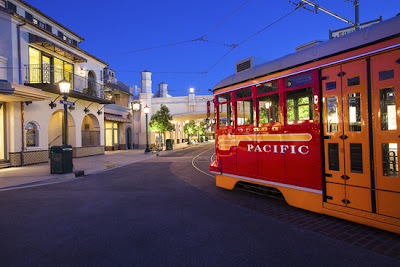 The theme of California itself appears to be the result of a single event a decade earlier – Disney’s 1989 purchase of the Wrather Corporation. Jack Wrather, a prolific television producer whose credits included The Lone Ranger and Lassie, began to invest in a number of hotel and resort properties around the country, in luxury markets such as Las Vegas, Palm Springs, and Newport Beach. He was asked by Walt Disney to build an “official” hotel adjacent to the Disneyland park in Anaheim and the upscale Disneyland Hotel opened on October 5, 1955. Over the years, Walt and his successors offered to purchase the hotel property, and over the years, Wrather refused them. It was not until after Wrather’s death that Disney CEO Michael Eisner was able to work out a deal to purchase the Wrather Corporation.

With the hotel came another property – the Wrather Corporation also managed the Queen Mary and Spruce Goose attractions in Long Beach, including the Queen Mary’s on-ship hotel. With the acquisition, management of the Queen Mary suddenly became the responsibility of Disneyland. Imagineers worked hard on devising new tours and attractions while Disneyland began offering a multi-day pass that also included admission to the Queen Mary.

Then in order to finance his grand plans for expansion, Eisner started an unnecessary and farcical war between two municipalities. In 1991, he and Disney President Frank Wells had announced the “Disney Decade,” which would include new shows and attractions, huge parking garages, a new Tomorrowland, an entirely new land – Hollywoodland, a shopping and entertainment district, live concert amphitheater, and WESTCOT – a whole new West Coast version of EPCOT. In order to pay for the infrastructure, Eisner needed both the financial and governmental support of the City of Anaheim. And to get his way, he threatened to cancel the entire project by building another huge theme park in another city – Long Beach – built around the Queen Mary.

The Long Beach park, DisneySea, never happened, although a modified version did become a hit at Tokyo Disney Resort. And what about WESTCOT? Well, it seems very few guests were purchasing those multi-park tickets that included admission to the Queen Mary. Surveys were taken in the Entrance Plaza asking where they went when they left Disneyland. The answers started coming in – Hollywood. The beach. Knotts. Six Flags. Yosemite. Monterey. Napa. Fresno. Everywhere but the Queen Mary.

And thus California Adventure was conceived – a park that was a facsimile of a trip around California in an effort to retain guests at Disneyland, a mirror of Eisner’s idea for Disney’s America on the East Coast. Why visit when we can take you there in ways reality can’t?

Disneyland itself is a representation of the ideals that interested Walt Disney the man, as seen through the imaginative lens of 1950’s and 1960’s optimism. There are no leaches in Adventureland, no horse manure lining the streets of Frontierland, and no drunkards haggardly stumbling home down Main Street. Welcome to Walt’s sanitized utopian vision of the memories and fantasies of his brain.

Because the core blueprint of the park has remained the same for over fifty years, children of each “generation of Walt” have been able to experience practically the same narrative. For you see, there are four distinct “generations of Walt,” each based upon when our formative years took place and how we related to Walt Disney the man and to his company during those years.

First are those that grew up prior to the Second World War, at a time when the Disney Studio was exclusively an animation studio. These souls lived through the Depression and the Disney characters held a unique position in their continued survival. Second are the Baby Boomers, who experienced both the birth of television and the introduction of Disneyland, who considered the much more accessible Walt to be “Uncle Walt.” Third are those who grew up in the late ’60’s and the 1970’s, at a time when Walt the man was not part of their lives, but the company continued under the stunted philosophy of “What would Walt do?” Finally are those who grew up in the Eisner/Iger era, when the company went in radical new directions and Walt Disney the man progressed into the marketing and consumer products item of Walt Disney the legend. Separated by decades of time, the marketing juggernaut turned him into a fanciful character whose true identity was lost to time – the new Lincoln or Shakespeare, if you will.

The new California Adventure park was designed by a group of Imagineers who, for the most part, never met Walt the man. It is, again, a fanciful take on the themes that interest him disguised as a trip around the state through his “eyes.” Within one will find 1920’s and 1930’s Los Angeles and Hollywood, aviation (a huge interest, especially during and post-WWII), the mountains, nature, the automobile, and the amusement park where Walt sat on a bench while his daughters went on a ride without him, an idea that led to the creation of Disneyland as entertainment for the full family and of the new Dumbo at Walt Disney World’s Magic Kingdom, where in the virtual queue parents can sit on a bench while their children play without them. 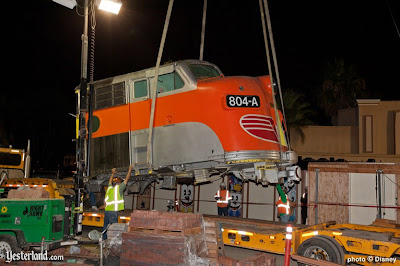 Most ironic, is that every account I have read of Disney arriving in California says he did so by train and, as part of the redevelopment of the park, the only train in California Adventure has been removed. But that’s ok, because the Route 66 in Cars Land can be used as a metaphor for Walt’s Journey – from Chicago to Missouri to Los Angeles.

There’s another place that traces the journey of Walt from Chicago to Missouri to the intersection of 66 and Los Angeles. But in this case, the 66 is 1966, the final year of Walt’s life. The Walt Disney Family Museum in San Francisco uses actual documents and artifacts to trace the life of the man, not the character. Exhibits start with his birth in 1901 and end with is death in 1966. I can’t say the museum is unbiased. Although it does cover some negative aspects of his life, such as the studio strike and his testimony before the House Unamerican Activities Committee, it is designed to concentrate on his achievements, and incredible achievements they were.

So now there are two ways to experience the life of Walt Disney – through the fictional world created around the character based on the man, or through the collection of artifacts telling his true story.

Joe Kleimanhttp://wwww.themedreality.com
Raised in San Diego on theme parks, zoos, and IMAX films, InPark's Senior Correspondent Joe Kleiman would expand his childhood loves into two decades as a projectionist and theater director within the giant screen industry. In addition to his work in commercial and museum operations, Joe has volunteered his time to animal husbandry at leading facilities in California and Texas and has played a leading management role for a number of performing arts companies. Joe previously served as News Editor and has remained a contributing author to InPark Magazine since 2011. HIs writing has also appeared in Sound & Communications, LF Examiner, Jim Hill Media, The Planetarian, Behind the Thrills, and MiceChat His blog, ThemedReality.com takes an unconventional look at the attractions industry. Follow on twitter @ThemesRenewed Joe lives in Sacramento, California with his wife, dog, and a ghost.
Share
Facebook
Twitter
Linkedin
Email
Print
WhatsApp
Pinterest
ReddIt
Tumblr
Previous articleA Moment of Curiosity
Next articleGallegos Exits Thorburn Associates