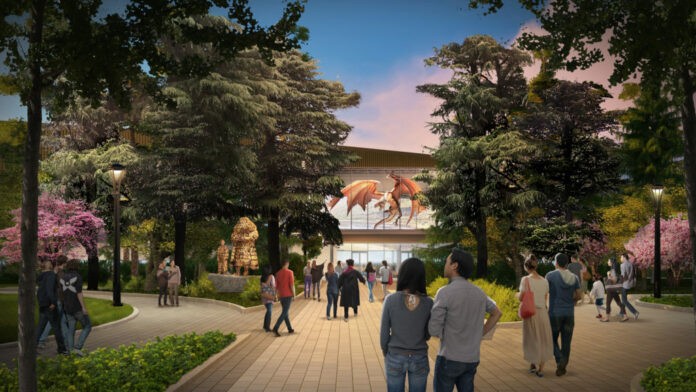 The 30,000 square meter facility is scheduled to open in the first half of 2023 on the site of Toshimaen in Nerima Ward, Tokyo. Following the success of Studio Tour London, which has been visited by many people from all over the world, Warner Bros. Studio Tour Tokyo offers a new style of entertainment allowing for unprecedented experiences and learning.

In the indoor space, the “Magical World” will feature the impressive sets from the “Harry Potter” and “Fantastic Beasts,” allowing visitors to learn behind-the-scenes secrets.

Studio Tour Tokyo is a hands-on entertainment facility that visitors can walk around, including a large movie studio-style building and sets built outside. In addition to these, there are plans to create a plaza in front of the front entrance of the studio tour where visitors and locals can relax.

Warner Group and Itochu Shoji Co., Ltd, Seibu Railway Co., Ltd. and Fuyo General Lease Co., Ltd. will promote this project in cooperation with each other.

Warner Bros. Worldwide Studios Operations President Jeff Naigler comments: “After the groundbreaking ceremony, Warner Bros. Studios Tour Tokyo has taken a big step towards the opening of 2023. With the support of Seibu Railway, ITOCHU, and Fuyo General Lease, we will cooperate with Nerima Ward and the Tokyo Metropolitan Government Building to promote the project in a way that takes consideration of the surrounding environment. At the same time, we are prioritizing the protection of the beautiful green areas of this calm area of ​​Nerima Ward, as well as the promotion of the tour industry, job creation and the promotion of attraction itself to the area. We will continue to strive to provide a place where you can enjoy yourself. Please keep an eye on Studio Tour Tokyo in the future.”

Tomofumi Yoshida, Representative Director, Vice President and Executive Officer, ITOCHU Corporation: “We were able to successfully hold the groundbreaking ceremony for Warner Bros. Studio Tour Tokyo, the second in the world after London, on the site of Toshimaen, which is surrounded by forests near the city center, and is owned by Seibu Railway. This facility is a new facility where you can enjoy unique experiences and learning, and we are very honored to be able to help create a base that creates a new business. As a building developer, we will continue to work on building construction safely and steadily to make Studio Tour Tokyo a wonderful facility.”

Seibu Holdings Co., Ltd. President and CEO Seibu Railway Co., Ltd. Chairman and CEO Takashi Goto: “We are very pleased to welcome the start of construction of Studio Tour Tokyo safely. This facility will become a new base for liveliness and cultural dissemination in the region, and along with the Nerima Castle Ruins Park, which is being gradually developed by the Tokyo Metropolitan Government, will energize not only Japan and Asia but also Harry Potter fans and many other people around the world. I am confident that it will be a symbolic place for all after the coronavirus. As we approach the opening in the first half of 2023, Tokyo Metropolitan Government, Nerima Ward, and other related parties will continue to cooperate and work together, and in collaboration with Warner Brothers Japan and Seibu Group companies, the area along the Seibu Railway will be even more lively.”

Fuyo General Lease Co., Ltd. President and CEO Yasunori Tsujita: “We are very pleased that we were able to successfully welcome the start of construction of Studio Tour Tokyo with the groundbreaking ceremony. We have set the real estate business as one of our strategic fields, and with this project, we will cooperate with related companies to consider the environment and local residents, while also considering the development of new communities. We aim to contribute to town development where people can continue to thrive. We will continue to promote this project in cooperation with related companies toward the realization of the studio tour.