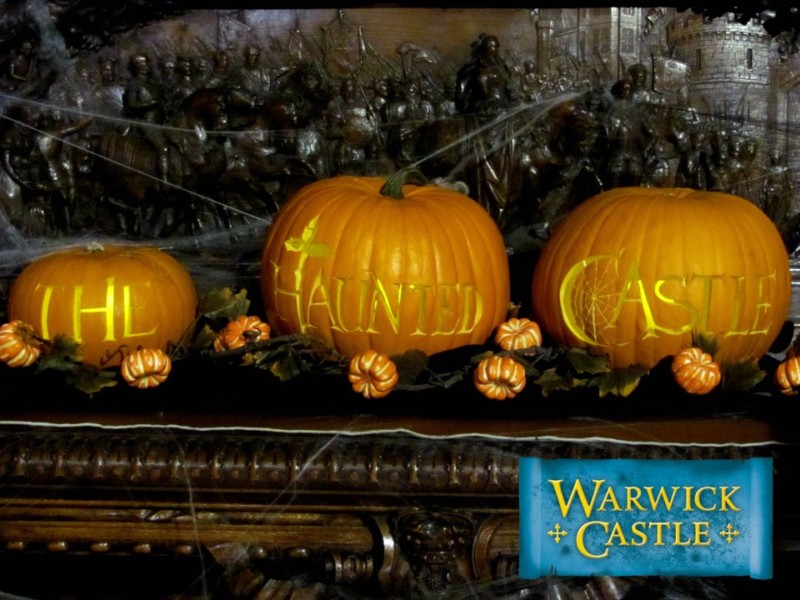 With dueling dead, wanton witches, spooky séances and ﬁreballs after dark, Warwick Castle is the place to be this Halloween (24 October-2 November). The Haunted Castle promises fearful levels of fun for all ages during the day and then, after dark, the fright factor is cranked high as the ancient site remains open until 9pm.

During daylight, younger visitors will love the three daily ghost storytelling sessions, The Skeleton Ball in The Haunted Hollows, a family-friendly trail through an abandoned castle, Children can visit a scary swamp, a spider’s lair, a graveyard and more: watch out for the skeletons at the spooky party.

The poor princesses – evicted once again from their home – can only look on as the Princess Tower falls into the hands of a coven of wondrous witches and is transformed into the Witches’ Tower. Perfect for younger kids, this is a place where they can become witches in training, dress up and have a go at writing spells (from 19 October- 2 November).

The History Team takes over Dream of Battle in Guy’s Tower to show genuine recordings from the Castle’s 60-acre grounds that seemingly show the shady spirits that haunt the one-thousand year old site. Guests are welcome to make up their own minds about what they see, but beware: the Castle has a history of hauntings, including Sir Fulke Greville who met a dreadful death and whose presence has been reported in one of the rooms recently unlocked for the ﬁrst time by Sir Tony Robinson.

Fear is a funny thing as The Castle Dungeon provides a fright on the best of days, but during The Haunted Castle the spirits appear more restless: witness some of the darkest, bloodiest and most frightening times in the Castle’s history as live actors and special effects bring to life gruesome tales from when the town was ravaged by plague. Recommended for over 10s only.

For our bravest adult visitors venture deep into the darkness of the Castle Gaol, a dingy and dank depository for the friendless and forgotten of ages past, for a Séance that may awaken restless spirits.

Seeing The Haunted Castle after dark – when the shadows shift and the walls seem to whisper tales of woe – is a terrifying treat for adults: for the second year the Castle remains open until 9pm – with a ﬁreball ﬁnale at 8.30pm – with special adult tickets available for entry at 5pm.

Daily Shows and more…
Every day throughout The Haunted Castle, visitors can enjoy the following shows and displays, all included in the price of entry to Warwick Castle.

• Three ﬁrings of the Trebuchet (twice with a ﬁreball)
• The Duelling Dead Fighting Swordsmen
• Raising the Portcullis
• Flight of the Eagles Show, twice daily
• Sword in the Stone
• History tours of State Rooms and Great Hall
• Towers & Ramparts
• The Castle Dungeon and Merlin: The Dragon Tower (fees apply)
• Warwick Castle Unlocked – four new rooms opened in February 2013
• Plus The Headless Horseman, Plague Doctors and Haggie the Cook will be roaming the Castle grounds.

Joe Kleimanhttp://wwww.themedreality.com
Raised in San Diego on theme parks, zoos, and IMAX films, InPark's Senior Correspondent Joe Kleiman would expand his childhood loves into two decades as a projectionist and theater director within the giant screen industry. In addition to his work in commercial and museum operations, Joe has volunteered his time to animal husbandry at leading facilities in California and Texas and has played a leading management role for a number of performing arts companies. Joe previously served as News Editor and has remained a contributing author to InPark Magazine since 2011. HIs writing has also appeared in Sound & Communications, LF Examiner, Jim Hill Media, The Planetarian, Behind the Thrills, and MiceChat His blog, ThemedReality.com takes an unconventional look at the attractions industry. Follow on twitter @ThemesRenewed Joe lives in Sacramento, California with his wife, dog, and a ghost.
Share
Facebook
Twitter
Linkedin
Email
Print
WhatsApp
Pinterest
ReddIt
Tumblr
Previous articleLEGOLAND Windsor – Brick-or-Treat
Next articleLEGOLAND Billund – Halloween