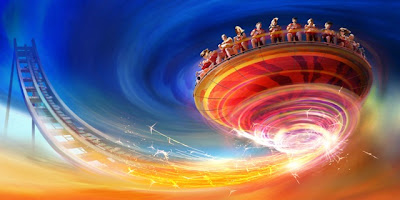 Valdosta, GA, USA — Wild Adventures Theme Park (WA) announces the addition of a duo of family rides for the 2013 season. For thrill seekers, the park introduces TailSpin, a rocking and spinning ride on a half-pipe which takes riders more than four stories high while facing outward on a motorcycle-like seat. For littler ride enthusiasts, the park is adding Wacky Wheels, a whirling teacup-like ride of funky cars. The new rides were announced by Molly Deese, WA’s newly-appointed vice president and general manager.

“We’ve had great response to the improvements we’ve made in the past few years, but families told us they wanted more thrill rides and rides for younger kids. The boardwalk location of TailSpin and Wacky Wheels creates a new lakeside hub for kids, teens and adults alike,” said Deese in making the announcement.

Deese also announced the park has introduced new season pass benefits for 2013 passholders including a risk-free concert guarantee, up to five Bring-A-Friend tickets for each passholder and early water park entry on Saturdays.

Next year, WA is bringing up to 20 new entertainment elements to park, including concerts, special events and shows. The park plans to reveal the full line-up in February 2013.

“Our goal is to always provide families with memorable fun at a great value and this upcoming season is no exception,” said Deese. “In addition to the rides, water park and animals, we know that many of our guests enjoy seeing concerts at Wild Adventures. With the new risk-free concert guarantee, families can take advantage of the lowest season pass price right now, knowing that if they’re not completely satisfied with the 2013 concert and entertainment schedule when it is announced in February, they can get their money back on any unused passes.”

In addition to the risk-free concert guarantee, next year’s season passes include two new added benefits: early entry to Splash Island Water Park on Saturdays and up to five Bring-A-Friend Free Days.

“Families told us they wanted even more convenience and flexibility and these new benefits provide just that. For less than the price of a single day admission to other theme parks you can purchase a WA season pass and visit as much as you want, all season,” said Deese. “At Wild Adventures visitors find major coasters, rides, a complete water park and great family-friendly entertainment, including concerts, in a relaxed atmosphere, but pay less,” said Deese.

Wild Adventures is a 170-acre theme park, water park, and animal park all in one place for less located in Valdosta, Georgia. The park features one of the largest ride collections in the South, more than 500 wild animals, Splash Island Water Park, the region’s largest water park, shows, festivals and all-star concerts. The park is owned and operated by Herschend Family Entertainment (HFE), a company specializing in family entertainment. For nearly half a century, HFE has owned, operated or partnered in 21 properties across nine states, including Branson, Missouri’s Silver Dollar City; operating partner with Dolly Parton in Tennessee’s Dollywood and Dollywood’s Splash Country; operating partner in Atlanta’s Stone Mountain Park and owners of Ride the Ducks amphibious tours in six cities.

Joe Kleimanhttp://wwww.themedreality.com
Raised in San Diego on theme parks, zoos, and IMAX films, Joe Kleiman would expand his childhood loves into two decades as a projectionist and theater director within the giant screen industry. In addition to his work in commercial and museum operations, Joe has volunteered his time to animal husbandry at leading facilities in California and Texas and has played a leading management role for a number of performing arts companies. Joe has been News Editor and contributing author to InPark Magazine since 2011. HIs writing has also appeared in Sound & Communications, LF Examiner, Jim Hill Media, and MiceChat. His blog, ThemedReality.com takes an unconventional look at the attractions industry. Follow on twitter @ThemesRenewed Joe lives in Sacramento, California with his fiancé, two dogs, and a ghost.
Share
Facebook
Twitter
Linkedin
Email
Print
WhatsApp
Pinterest
ReddIt
Tumblr
Previous articleChance Rides Introduces Sunliner II
Next articleFORREC Continues Work On New Phases of Scream Land FEC in Dominican Republic