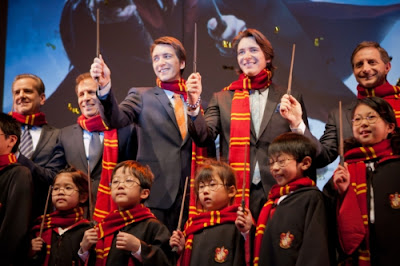 Osaka, Japan (May 10, 2012) /PRNewswire/ — Universal Studios Japan, in partnership with Warner Bros. and Universal Parks & Resorts, announced today that they will be bringing The Wizarding World of Harry Potter to Japan, marking the global expansion of this wildly popular themed entertainment experience that started at Universal Orlando Resort nearly two years ago.

The announcement was made by Glenn Gumpel, President and CEO, Universal Studios Japan; Brad Globe, President, Warner Bros. Consumer Products; and Michael Silver, President, Global Business Development, Universal Parks & Resorts; as well as James and Oliver Phelps, who played the roles ofFred and George Weasley in the Harry Potter film series. Governor of Osaka Ichiro Matsui was the guest of honor at the announcement, which also hosted more than a hundred excited fans dressed in Harry Potter attire who screamed with delight when the announcement was made.

The Wizarding World of Harry Potter in Orlando brought significant increases in tourism, jobs and economic benefit to the entire central Florida economy. The Wizarding World of Harry Potter at Universal Studios Japan is also expected to make a significant impact on tourism in both the Osaka/Kansai region and the entire country, creating thousands of new jobs and bringing economic benefits throughout Japanfor decades to come.

“I was delighted to experience and enjoy the attention to detail, creativity and superb craft that went into the first Wizarding World in Orlando. I am equally delighted that the same level of expertise and enjoyment will translate to the new park in Japan,” said J.K. Rowling.

”Harry Potter, the most wonderful and amazing story of our time, is coming to Universal Studios Japan. USJ is thrilled to be chosen to make the Harry Potter experience come alive for the people of Japan. USJ is committed to being the world’s best Theme Park and by bringing this brilliant story to Japan and creating a fantastic experience is yet another validation of that commitment,” said Glenn Gumpel, President and CEO of USJ Co., Ltd. ”USJ will recreate to the highest level of authenticity, The Wizarding World of Harry Potter, created by Universal Studios in Orlando, which has been enjoyed and cherished by millions and millions of Universal Orlando’s guests. The Wizarding World of Harry Potter – USJ’s commitment to bring the world’s best to life.”

The themed area itself will be a fully immersive environment for the entire family that brings the stories ofHarry Potter to life and is faithful to the visual landscape of the films, including a majestic Hogwarts castle which will serve as the centerpiece of the land.

”Harry Potter continues to captivate generations of fans around the world and we are delighted to announce this partnership with Universal Studios Japan that will allow us to bring the magic of The Wizarding World of Harry Potter to Asia,” said Brad Globe, President, Warner Bros. Consumer Products. ”The Wizarding World of Harry Potter allows fans to step into the magical world created in the books and witnessed in the films. We think this is the perfectly timed next step in bringing the magical world ofHarry Potter to life for even more fans.”

”The Wizarding World of Harry Potter is an entirely new level of themed entertainment that brings the stories of Harry Potter to life in incredible ways. It will forever change tourism, not only in Kansai but throughout Japan. We are thrilled to be bringing one of the most powerful themed entertainment experiences of our time to Universal Studios Japan, marking the global expansion of this incredible phenomenon, and we are confident that guests will want to return again and again to fully experience all that this fantastic environment will have to offer,” said Michael Silver, President, Global Business Development, Universal Parks & Resorts.

In June 2010, The Wizarding World of Harry Potter at Universal Orlando Resort opened and became an instant, unprecedented hit. Since then, Warner Bros. and Universal Parks & Resorts announced that the themed area would be coming to Universal Studios Hollywood, and also that the Orlando location would be significantly expanded. No specific details on either of these plans have yet been announced.

Harry Potter continues to be a global phenomenon. Each of the seven books by author J.K. Rowling has broken sales records, with the series to date having sold approximately 450 million copies worldwide and translated into more than 70 languages. The Harry Potter films, produced by Warner Bros. Pictures, have grossed more than $7.7 billion to date worldwide at the box office, making Harry Potter the largest-grossing film franchise in history. In Japan, the Harry Potter film series has earned $893 million to date at the box office and has been seen by more than 78 million people in theaters.

Academy Award-winning movie director Steven Spielberg has been the Creative Advisor to Universal Studios Japan. Every single detail in the Park including the total 39 attractions, landscape, decorations, restaurants, shops, food and merchandise products as well as crewmembersf services is delivered with the world’s finest entertainment.

Throughout the year, visitors from local Kansai and other parts of Japan as well as international tourists visit Universal Studios Japan to enjoy with families and friends. Since the grand opening in March 2001 inOsaka, Japan, Universal Studios Japan has established itself as one of the most attended theme parks in the world and a highly successful and profitable business.

About Universal Parks & Resorts
Universal Parks & Resorts (UPR), a unit of Comcast Corporation’s NBCUniversal, encompasses today’s most relevant and popular entertainment experiences, creating emotional connections with guests around the world. Each year, millions of guests visit Universal theme parks to experience thrilling, world-famous attractions based on popular culture’s most compelling stories and characters. With three-time Academy Award winner Steven Spielberg as creative consultant, Universal has created attractions that use ground-breaking technology to deliver experiences that cannot be found anywhere else.


NBCUniversal is one of the world’s leading media and entertainment companies in the development, production, and marketing of entertainment, news, and information to a global audience. NBCUniversal owns and operates a valuable portfolio of news, sports and entertainment networks; Universal Studios, a premier motion picture company; significant television production operations; a leading television stations group; and world-renowned theme parks.


About Warner Bros. Entertainment
Warner Bros. Entertainment is a global leader in all forms of entertainment and their related businesses across all current and emerging media and platforms. A Time Warner Company, the fully integrated, broad-based studio is home to one of the most successful collections of brands in the world and stands at the forefront of every aspect of the entertainment industry from feature film, television and home entertainment production and worldwide distribution to DVD, digital distribution, animation, comic books, video games, product and brand licensing, international cinemas and broadcasting.

Joe Kleimanhttp://wwww.themedreality.com
Raised in San Diego on theme parks, zoos, and IMAX films, InPark's Senior Correspondent Joe Kleiman would expand his childhood loves into two decades as a projectionist and theater director within the giant screen industry. In addition to his work in commercial and museum operations, Joe has volunteered his time to animal husbandry at leading facilities in California and Texas and has played a leading management role for a number of performing arts companies. Joe previously served as News Editor and has remained a contributing author to InPark Magazine since 2011. HIs writing has also appeared in Sound & Communications, LF Examiner, Jim Hill Media, The Planetarian, Behind the Thrills, and MiceChat His blog, ThemedReality.com takes an unconventional look at the attractions industry. Follow on twitter @ThemesRenewed Joe lives in Sacramento, California with his wife, dog, and a ghost.
Share
Facebook
Twitter
Linkedin
Email
Print
WhatsApp
Pinterest
ReddIt
Tumblr
Previous articleSky-Skan Creates 360 Degree Digital Sphere for Germany Pavilion at Yeosu Expo 2012
Next articleYeosu Expo 2012 "Big O" News Page