World’s fair consultant James Ogul talks about Milan 2015, and the history of US expo participation

[dropcap color=”#888″ type=”square”]I[/dropcap]n the matter of organizing a world’s fair pavilion, James Ogul is a top human resource. At such times as the United States has stepped up to participate in a world expo, from the early ‘80s to the present more often than not Ogul has been tapped to help coordinate the effort on the government side. Since retiring from the US State Department in 2011, he has remained connected to the expo scene in an advisory and consulting role. InPark co-editor Judith Rubin, who has known Ogul since her days with World’s Fair magazine in the ’80s and ’90s, interviewed him about US plans and prospects for participating in the next world exposition, Milan 2015 – and about the complex workings and history of these projects.

This article, first published in December 2013, is part of “Tales from the Expo” – an InPark Magazine online book written by James Ogul and edited by Judith Rubin.

Where does the money come from for a US pavilion at a world expo?

When I first got started in Expos in 1981, our money came from Federal Appropriations. We raised some additional support from the private sector, usually in the form of goods and services. For example, if we were doing an exhibit on solar energy we might get the solar panels in the display donated. If we needed TV monitors, we would go to a manufacturer and try to get them donated.

The 1992 Seville world’s fair changed things with a model of 50/50 funding from the government and the private sector. What is not widely know is that there was no federal appropriation for the US participation in Seville, but rather the United States Information Agency (USIA) had to take the money out of its own hide – in what is called “reprogramming.” In addition to the approximately $15 million in reprogramming, $15 million in private sector donations was raised.

For Taejon Expo 93, all of the US pavilion funding was from the private sector with Amway corporation being the prime funder. This was the first US pavilion to be totally privately funded. In 1994, budget language for the USIA stated, “Notwithstanding any other provision of law, the United States Information Agency shall not obligate or expend any funds for a United States Government funded pavilion or other major exhibit at any international exposition or world’s fair registered by the Bureau of International Expositions in excess of amounts expressly authorized and appropriated for such purpose.” 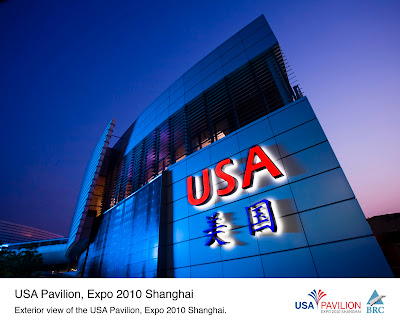 For the US to exhibit at Expo 98 at Lisbon, Portugal, since the legislation did not preclude money coming from other government agencies, the project turned to HHS (Health and Human Services) and the US Navy, which provided a combined total of $6.5 million through an interagency fund transfer, to supplement the $3 million in non-federal support that had been raised.

For Hanover 2000, fundraising pledges from the private sector were insufficient to achieve a $45 million goal and the US was forced to withdraw from the expo. For Aichi Expo 2005, approximately $34 million was raised with the majority of the funding coming from Toyota of North America.

What can you tell us about the team that was selected for the USAP at Milan Expo 2015?

Here is an excerpt from a White House Press release that announced their selection: ‘Milan Expo 2015:  The United States is moving forward with “Friends of the U.S. Pavilion Milano 2015,” our partner in the effort to build the USA Pavilion at the Milan Expo.

‘This group must now raise the necessary private funds to sponsor the USA Pavilion. In partnership with The James Beard Foundation and the International Culinary Center, and in association with the American Chamber of Commerce in Italy, the Friends group will work for a vibrant U.S. presence at the Milan Expo.

‘Its goal is to use state-of-the-art digital media and other novel approaches to showcase American leadership and innovation in global food security, agriculture, and cuisine and lay the seeds for enhanced trade and investment between the United States and Italy in this sector, so important to the cultural heritage of both nations.’

Why is it important for the US to participate in a world’s fair?

Historically, have the reasons for doing so remained pretty much the same?

In answer to the second question: Yes.

In answer to the first: World’s fairs offer an excellent venue for presenting America’s view on the Expo theme to a large audience. The theme for Milan Expo 2015 is  “Feeding the Planet, Energy for Life.” Since the year 2000, 127 million people have attended world’s fairs. In particular, our pavilions have made strong impressions – and our young guides (Student Ambassadors) interact with thousands of visitors daily, speaking the language of the host country.

Many heads of state visit world’s fairs, especially to commemorate National Days which take place for each participating country. Most of the heads of state visit the US pavilion and are met and greeted by the US Commissioner General, who heads up the US pavilion. These first-person impressions and interactions offer important diplomatic opportunities. Participating US Corporations often have annual board meetings at the US pavilion and the setting offers them unparalleled chances to expand business interests in the host countries.

What are some of the unique and specialized factors that project teams will encounter doing an expo pavilion?

Project teams benefit from creativity in developing story lines and imaginative and innovative ways to present them. Experience working with large crowds is a significant plus. Experience working in foreign countries is important. Special skills in architecture, exhibit design and fabrication, venue operations, project management, fundraising and budgeting are all needed.

What particular challenges would the US team for Milan 2015 be facing?

The biggest challenge is raising the money and dealing with a cash-flow situation where they will be incurring expenses while they are attempting to raise money. The project timeline will require sufficient time for design and construction of a large building, design and fabrication of exhibits, installation of exhibits, hiring and training of staff and development of an operational plan that will enable the pavilion to serve thousands of visitors a day for the 6-month run of the expo.  These were the same challenges I faced again and again in my career. Expo pavilions are fast-paced projects with daunting time restrictions that require a dedicated staff willing to work long hours under constant pressure.

Tell us about one of your most memorable experiences in connection with a US pavilion.

Working on US pavilion projects have their interesting moments. I remember at Vancouver Expo ’86, Prince Charles and Princess Diana visited the US pavilion and I was designated to take them on the tour. We had an upstairs and a downstairs in the pavilion and the handlers told us they would not have time to start upstairs and go through the entire pavilion, but instead would enter at the bottom and view two exhibits. Our Commissioner General was to meet them outside and we both felt they should see the whole pavilion, so he said he would try to persuade them.

I was to watch through a crack in the downstairs door for a hand signal behind his back: He would give me a thumbs-up for the entire tour. After a short discussion, I saw the thumbs-up and dashed up the stairs to meet them on the second floor for the full tour. I was a bit out of breath! The handlers had coached me on proper protocol and told me I was to bow but not touch. However, the Prince and Princess came up to me and immediately extended their hands for a handshake.

Joe Kleimanhttp://wwww.themedreality.com
Raised in San Diego on theme parks, zoos, and IMAX films, Joe Kleiman would expand his childhood loves into two decades as a projectionist and theater director within the giant screen industry. In addition to his work in commercial and museum operations, Joe has volunteered his time to animal husbandry at leading facilities in California and Texas and has played a leading management role for a number of performing arts companies. Joe has been News Editor and contributing author to InPark Magazine since 2011. HIs writing has also appeared in Sound & Communications, LF Examiner, Jim Hill Media, and MiceChat. His blog, ThemedReality.com takes an unconventional look at the attractions industry. Follow on twitter @ThemesRenewed Joe lives in Sacramento, California with his fiancé, two dogs, and a ghost.
Share
Facebook
Twitter
Linkedin
Email
Print
WhatsApp
Pinterest
ReddIt
Tumblr
Previous articleGregor Rimell New Account Manager for Electrosonic’s Corporate Solutions Business in Scotland
Next articleAECOM Releases China Theme Park Pipeline Report for 2013 (Read Full Report Here)

Thailand applies to host Specialized Expo 2027/28, second to apply after US