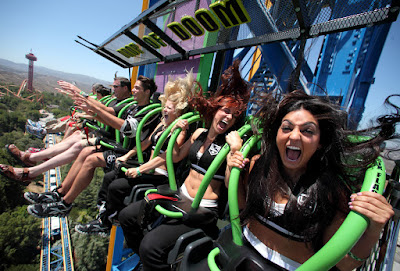 Celebrity guest Michael Rosenbaum, who played Lex Luthor for 10 years on CW’s long-running hit television series Smallville, was on-hand for the official launch of the first ride. Named after one of DC Comics’ most dangerously intelligent super-villains and Superman’s greatest enemy, unassuming guests enter LexCorp, a very large and powerful company that LEX LUTHOR uses as a front to finance his criminal organization. Inside LexCorp, guests view the suit LEX LUTHOR uses to fight Superman before they are summoned to board the ride. Once seated inside floorless gondolas on two vertical tracks flanking each side of the sky-scraping SUPERMAN: Escape from Krypton tower, passengers are pulled to the top of the tower, experience a brief pause before plummeting to Earth, all while the 100-mph SUPERMAN: Escape from Krypton cars are blasting backwards up the iconic tower at the same time.

Six Flags Magic Mountain is located north of Los Angeles in the Santa Clarita Valley and offers fun for the entire family. Voted the #1 Roller Coaster Theme Park in the World by Theme Park Insider, the theme park opens daily at 10:30 a.m.


About DC Entertainment
DC Entertainment, home to iconic brands DC Comics (Superman, Batman, Green Lantern, Wonder Woman, The Flash), Vertigo (Sandman, Fables, etc.) and MAD, is the creative division charged with strategically integrating its content across Warner Bros. Entertainment and Time Warner. DC Entertainment works in concert with many key Warner Bros. divisions to unleash its stories and characters across all media, including but not limited to film, television, consumer products, home entertainment, and interactive games. Publishing thousands of comic books, graphic novels and magazines each year, DC Entertainment is the largest English-language publisher of comics in the world. In January 2012, DC Entertainment, in collaboration with Warner Bros. and Time Warner divisions, launched We Can Be Heroes – a giving campaign featuring iconic Justice League super heroes – to raise awareness and funds to fight the hunger crisis in the Horn of Africa.
SUPERMAN and all related characters and elements are trademarks of and © DC Comics.

Joe Kleimanhttp://wwww.themedreality.com
Raised in San Diego on theme parks, zoos, and IMAX films, InPark's Senior Correspondent Joe Kleiman would expand his childhood loves into two decades as a projectionist and theater director within the giant screen industry. In addition to his work in commercial and museum operations, Joe has volunteered his time to animal husbandry at leading facilities in California and Texas and has played a leading management role for a number of performing arts companies. Joe previously served as News Editor and has remained a contributing author to InPark Magazine since 2011. HIs writing has also appeared in Sound & Communications, LF Examiner, Jim Hill Media, The Planetarian, Behind the Thrills, and MiceChat His blog, ThemedReality.com takes an unconventional look at the attractions industry. Follow on twitter @ThemesRenewed Joe lives in Sacramento, California with his wife, dog, and a ghost.
Share
Facebook
Twitter
Linkedin
Email
Print
WhatsApp
Pinterest
ReddIt
Tumblr
Previous articleAndy Anderson Appointed Director of Northeast US Operations for Technomedia
Next articleUniversal and Loews Bringing Fourth Resort Hotel to Universal Orlando