The exhibition, the largest King Tut show ever toured, has begun a ten-month run at the Science Center. The Egyptian-themed Discovery Ball, held in the Samuel Oschin Pavilion in the Ahmanson Building, raised more than $1.6 million for the California Science Center.

Bart Kresa, who heads the international Bart Kresa Studio, transformed the space shuttle into the boy king’s tomb by projection mapping the fuselage and vertical tail with images of King Tut’s iconic jewel-encrusted sarcophagus.  He also created 20 wall projections of scenes from the interior of the tomb.

WorldStage, a preferred technical partner of Kresa, provided AV support for the space shuttle and wall projections.  WorldStage recently teamed with Kresa in Southern California on the seventh-season premiere of “Game of Thrones,” when Kresa mapped the Walt Disney Concert Hall, and on the opening of the residential, commercial and academic USC Village.

The shape of the space shuttle’s fuselage adapted well to the projection of King Tut’s sarcophagus; it appeared to levitate above the walls of the pavilion covered with vignettes of the tomb complete with projections of flickering torchlight.  Christina Sion at the center, suggested the design motif, which Kresa and his team developed, researching ancient Egypt, sketching and painting ideas and partnering with WorldStage to find the right technical solutions. 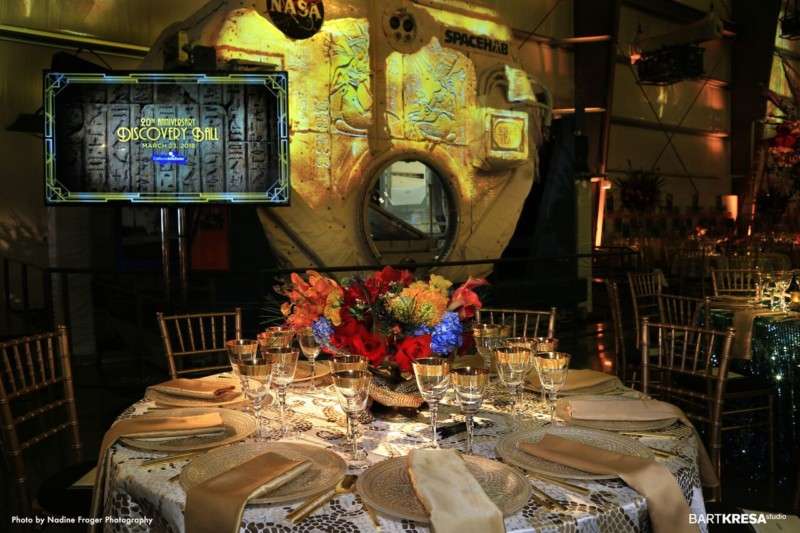 Kresa designed two looks for the evening.  “We started with a traditional warm, golden look then transitioned to the party with a cooler palette of blues and purples with a sparkling effect for dessert,” he explains.  “We wanted to create a beautiful ambiance that didn’t take away from the gala experience.  I love working at the California Science Center; it’s always nice to collaborate on projects for them.”

Kresa relied on WorldStage to supply the large complement of projectors required for the Discovery Ball as well as the digital routers, fiber optic cabling and power distribution.  “WorldStage is the best technical company I’ve ever worked with,” he says. “Everything is always so well organized on the projects we do together.”

WorldStage provided six Panasonic PT-RZ31K and PT-RZ21K laser phosphor, which were flown and rigged, to cover the space shuttle’s fuselage, nose and tail.  Kresa warped and blended the images with his Dataton WATCHOUT servers.

“I love this gear,” Kresa declares.  “The Panasonic projectors have a very vibrant light and very good focus; they deliver sharper images than other projectors I’ve used and the color really pops.  For our work that’s what we want: vibrant images whose psychological effect is to make people happy.”

WorldStage furnished 20 Panasonic PT-RZ770 projectors for the individual wall vignettes.  They were positioned in the control area under the nose of the space shuttle, in an area port side aft of the aircraft and on vertical truss sticks close to the walls.

Since there was no opportunity to have redundant projectors WorldStage devised a creative backup plan using the Panasonic projectors’ internal logo transfer software.  “The screen grab of each image being projected effectively became a still store,” explains WorldStage account executive/project manager Joe Conway.  “The content was saved in the projector itself so we could automatically go to that still store if necessary.  If a projector suddenly lost a signal there wouldn’t be a black hole.”

Kresa’s new mobile studio contributed to the efficient technical operation on site.  With 28 projectors mounted in the pavilion, additional equipment was kept to a minimum with Kresa’s 20 WATCHOUT servers housed in his mobile unit parked on the street.  Fiber optic cabling ran video and Internet data from the mobile studio to the pavilion.  “It was a pretty clean installation,” says Kresa.

WorldStage created a LAN network to communicate with the projectors via laptop.  When the show was underway the network gathered information on projector status for live monitoring.

Kresa gives kudos to WorldStage tech lead/projectionist Robert Loney.  “I love working with Bob,” he says.  “He’s one of the best projectionists in the country.  He pays attention to all the details so there are no surprises.”

Joe Kleimanhttp://wwww.themedreality.com
Raised in San Diego on theme parks, zoos, and IMAX films, InPark's Senior Correspondent Joe Kleiman would expand his childhood loves into two decades as a projectionist and theater director within the giant screen industry. In addition to his work in commercial and museum operations, Joe has volunteered his time to animal husbandry at leading facilities in California and Texas and has played a leading management role for a number of performing arts companies. Joe previously served as News Editor and has remained a contributing author to InPark Magazine since 2011. HIs writing has also appeared in Sound & Communications, LF Examiner, Jim Hill Media, The Planetarian, Behind the Thrills, and MiceChat His blog, ThemedReality.com takes an unconventional look at the attractions industry. Follow on twitter @ThemesRenewed Joe lives in Sacramento, California with his wife, dog, and a ghost.
Share
Facebook
Twitter
Linkedin
Email
Print
WhatsApp
Pinterest
ReddIt
Tumblr
Previous articleIAAPA selects Eleventh Hour to assist with CEO search
Next articleIAAPA seeks nominations for annual Service Awards