A winter-is-coming theme marked the gala seventh-season premiere of “Game of Thrones” at the Walt Disney Concert Hall.  The after-party, staged on the roof level of Classic Parking across the street, overlooked the hall where projection designer Bart Kresa mapped the upper planes of the building with  scenes and imagery from HBO’s hit series.  WorldStage provided Kresa with Panasonic laser projectors and video engineering support.

The iconic Frank Gehry-designed concert hall hosted a brief concert featuring music scored for the show before celebrity guests settled in to view the first episode of the penultimate season.  Then invitees crossed the street to the rooftop after-party, which was dressed with costumes and show props.  Kresa painted the concert hall with three different content loops, including one in which Drogon breathes fire across the façade.  The  projection mapping served as a continuous backdrop for the party and a treat for fans on the street.

“HBO has been my client for ten years; I’ve done numerous post-Golden Globes parties, post-Emmy parties as well as events for ‘Game of Thrones’ and ‘Westworld,’” says Kresa.  “The Disney Hall is one of my favorite buildings in the world, so when this project came along from HBO I was very excited to do it.”

The event reunited WorldStage and Kresa who have partnered on multiple projects in the last four years, including the annual summer projection mapping of the façade of the San Mateo (California) County History Museum.

“Bart has a very recognizable artistic style.  We love providing displays for him because he totally gets the medium,” says Bob Loney, WorldStage Senior Account Executive.  “He knows what he needs in terms of brightness, saturation and full-frame imagery.  Couple that with the excitement and beauty of ‘Game of Thrones,’ and he delivered an evening people won’t forget.” 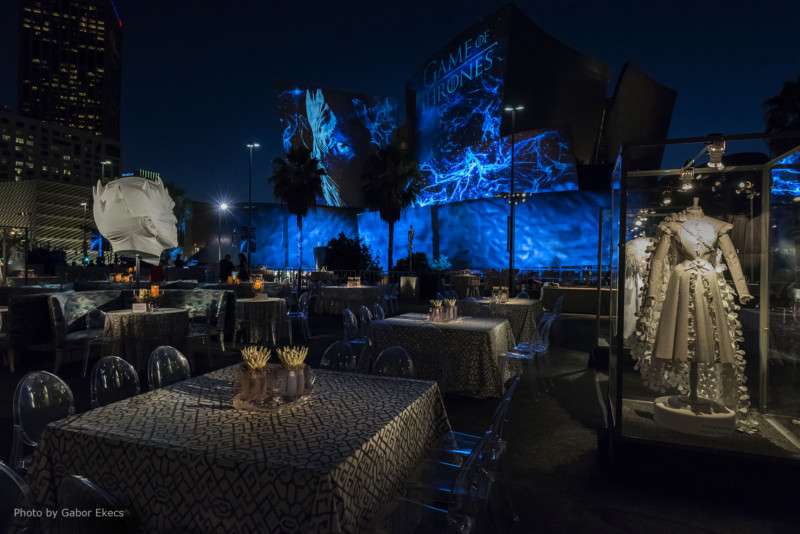 Kresa did some initial tests on the building pointing small projectors and even flashlights at the façades to study the surfaces and ensure that the direction of the reflections would be seen by the audience.

“We did some side-by-side tests between the Panasonic and other projectors and found the PT-RZ31KU to be far superior for what we wanted,” adds Kresa. “The color saturation was amazing and the images were literally glowing, exactly what we needed for this project.”

WorldStage partnered with Panasonic to provide the Panasonic PT-RZ31KU projectors that Kresa required along with additional projection and engineering support.  The WorldStage team worked with Kresa to install the equipment the night before and tech through everything.

“The large curved surfaces of the Walt Disney Concert Hall are covered with stainless steel tiles,” Loney notes.  “Initially, we were concerned the façade would have too much of a mirror finish for projection.  But it turned out that the surface reflectivity gain was exceedingly friendly: The surfaces were not too reflective.  The surface gain really added to the brightness.”

In fact, front projection on a façade typically cannot be seen until sunset or shortly thereafter.  “But we saw pictures on the concert hall at 6 pm with a blue sky behind the building due to the remarkable amount of light from the double-stacked projectors and some elevated gain that focused the image toward the viewing area,” Loney says.

Kresa did the pre-vis for the projection mapping and managed his content with Dataton WATCHOUT media servers. WorldStage did the projector set up and alignment the day before the event.  The company supplied portable instant canopies and plastic sheeting to protect gear overnight and space blankets to keep electronics out of direct sunlight during the day.

“I loved working with WorldStage,” Kresa adds.  I’ve known them for many years and was thrilled to be working with them on this project.  We had very little time to get this set up and WorldStage was able to get this put together for us very quickly.  They had worked out all the details beforehand and came in with everything prepared and tested.  They were really on top of their game and it was a pleasure working with them again.”

Kresa notes that, “We also could not have done this without the trust that HBO gave us.  We had to really manipulate and reimagine some of the images to make them work with the shape of the hall and HBO was great about it. I think that this was due to our long working relationship together.”

The event design was done by Billy Butchkavitz who worked with Images By Lighting to cover the bottom horizontal planes of the concert hall with lighting effects that complemented the BARTKRESA studio projection design on the building’s upper planes.

“The projection mapping came off even better than we expected,” declares Loney.  “The client was over the moon.  And there were reports that fans on the street found the imagery just jaw-dropping.  They’d never seen anything like it.”

Kresa concludes, “It came out beautifully and I’m really happy with everything about this project!”

At WorldStage, Joe Conway was the primary Account Executive, Jack Dussault was the Project Manager and Terry Nakamura, Loney and freelancer Patrick Dolan were the Projectionists.

Joe Kleimanhttp://wwww.themedreality.com
Raised in San Diego on theme parks, zoos, and IMAX films, InPark's Senior Correspondent Joe Kleiman would expand his childhood loves into two decades as a projectionist and theater director within the giant screen industry. In addition to his work in commercial and museum operations, Joe has volunteered his time to animal husbandry at leading facilities in California and Texas and has played a leading management role for a number of performing arts companies. Joe previously served as News Editor and has remained a contributing author to InPark Magazine since 2011. HIs writing has also appeared in Sound & Communications, LF Examiner, Jim Hill Media, The Planetarian, Behind the Thrills, and MiceChat His blog, ThemedReality.com takes an unconventional look at the attractions industry. Follow on twitter @ThemesRenewed Joe lives in Sacramento, California with his wife, dog, and a ghost.
Share
Facebook
Twitter
Linkedin
Email
Print
WhatsApp
Pinterest
ReddIt
Tumblr
Previous articleNational Endowment for the Humanities Grant Awarded to Upcoming Leonard Bernstein Exhibition
Next articleDan Maunder Appointed Picsolve Chief Technology Officer