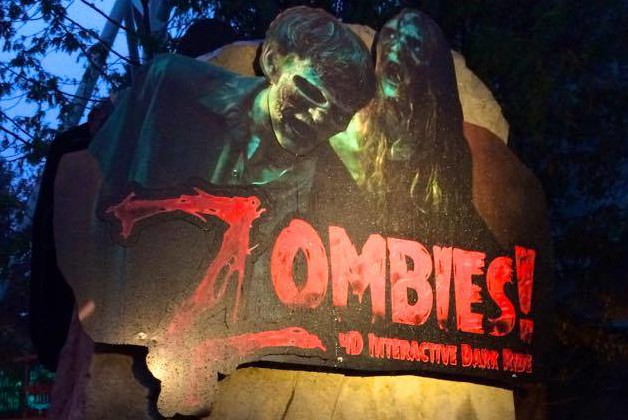 Mr. Ernest Yale, President and CEO of TRIOTECH stated: “We are very happy to open this Interactive Dark Ride with a strong local partner. FunLab’s expertise in the amusement and entertainment world is extremely strong.”

In this new attraction, to be called “Zombi”, TRIOTECH has designed and produced the animation and gaming system that allows guests to experience a 3D adventure enhanced with 4D effects and interactivity. The ride system has been provided by Gosetto srl of Treviso in Italy.

In “Zombi”, guests ride aboard four-person police-themed vehicles and embark on a thrilling family adventure. There are six carts with four interactive scenes and the same number of non-interactive scenes. The 216 feet long ride blends media-based interactivity with 4D effects. An extensive physical décor and theming completes the immersion for riders.

“This installation highlights the flexibility and scalability inherent in our media based offering. Even an FEC can afford to invest in an Interactive Dark Ride. It’s not just for large parks,” mentioned Gabi Salabi, Vice President of Business Development for TRIOTECH.

TRIOTECH has recently won two Brass Ring Awards for Best New Product; in 2013 for FEC’s and in 2014 for Major Theme/Attraction Parks as well as IAAPA’s prestigious Impact Award for its Interactive Dark Ride at IAAPA’s Expo last November in Orlando, FL, USA. “As the leading brand of the amusement industry in Turkey, FunLab is well aware that continuous innovation is key to success in a competitive market. This new ride & our partnership with Triotech will not only keep us cutting-edge but also add value to the entire network of FEC’s we operate,” stated Levent Baloglu, CEO of Balo-FunLab.

Joe Kleimanhttp://wwww.themedreality.com
Raised in San Diego on theme parks, zoos, and IMAX films, InPark's Senior Correspondent Joe Kleiman would expand his childhood loves into two decades as a projectionist and theater director within the giant screen industry. In addition to his work in commercial and museum operations, Joe has volunteered his time to animal husbandry at leading facilities in California and Texas and has played a leading management role for a number of performing arts companies. Joe previously served as News Editor and has remained a contributing author to InPark Magazine since 2011. HIs writing has also appeared in Sound & Communications, LF Examiner, Jim Hill Media, The Planetarian, Behind the Thrills, and MiceChat His blog, ThemedReality.com takes an unconventional look at the attractions industry. Follow on twitter @ThemesRenewed Joe lives in Sacramento, California with his wife, dog, and a ghost.
Share
Facebook
Twitter
Linkedin
Email
Print
WhatsApp
Pinterest
ReddIt
Tumblr
Previous article
Electrosonic Directors to Present at ISE 2015
Next article
Vortex Aquatic Structures Announces New Vice Presidents