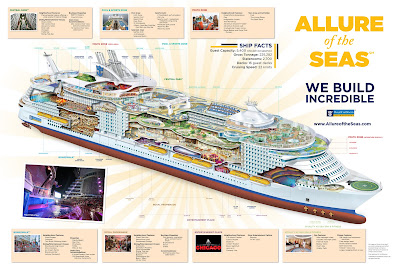 Emden, Germany, 15 February 2011 – A stereoscopic 3D digital cinema provided by FUNA International is one of the features that distinguish Allure of the Seas, Royal Caribbean International’s (RCI) new vessel and largest cruise ship in the world. Through the technical services of FUNA – a global engineering firm employing more than 200 professionals in 10 international locations – and an alliance with DreamWorks Animation, Royal Caribbean has made it possible for Allure’s guests to enjoy all the current 3D DreamWorks titles as well as other 3D movies, in the ship’s Amber Theater. Allure’s November 28 naming ceremony honored DreamWorks’ Princess Fiona, Shrek’s animated life partner, as the godmother of the ship.

In addition to the Amber Theater, FUNA provided technical design, engineering, integration and consulting for entertainment, display and communications in most of the theaters, restaurants, clubs, and public spaces – as well as the crew recreation and support areas – on Allure of the Seas. The 16-deck, 5,400-guest, 225,282-ton, $1.5 billion Allure of the Seas is just 5 centimeters longer than sister vessel Oasis of the Seas, for which FUNA provided a similar range of technical services. Royal Caribbean International took delivery of Allure on October 28 from STX Europe in Turku, Finland. Her US debut into her homeport of Port Everglades in Fort Lauderdale, Fla. occurred November 11.

Configuring 3D cinema on a cruise ship has its own special challenges due to the maritime environment, limited footprint, close proximity to other systems and functions, and the need to rely on in-house maintenance. “We called upon FUNA and their team to come up with creative technical design solutions in a number of areas including physical placement, additional cooling and power and integration with the existing audio system, and the result is a 3D movie experience as good as or better than any land-based theater,” said Christopher Vlassopulos, Entertainment Technology and Technical Direction for Royal Caribbean International & Celebrity Cruises. “On testing the finished product, people at the highest level at Barco [projection supplier], DreamWorks and Dolby [sound system supplier] were ‘blown away’ with the result. We wanted to do a good job but to impress them out of the gate was a real bonus and obviously something the guest will really enjoy. It looks and sounds great.”

“Oasis of the Seas is already a floating marvel, but Royal Caribbean never stands still. With 3D cinema now on board Allure of the Seas they’ve raised the bar yet again in redefining the luxury cruise guest experience, and we’re proud to have been a part of it,” says Rex Stull, President of FUNA.

“Royal Caribbean is always looking for the latest and greatest in entertainment technology, and pushing us to help develop it on board their ships and utilize it in the best way for their guests,” says Derek Warner, FUNA project manager, “which is one reason they’re fantastic to work with.”

Building upon the popularity of 3D exhibition Royal Caribbean will next upgrade several existing cruise lines with new 3D cinemas, starting with Allure’s sister ship and immediate predecessor, Oasis of the Seas. “We’re doing Oasis in the first quarter 2011, as well as Liberty of the Seas and Freedom of the Seas,” confirms Vlassopulos, adding, “It was a pleasure to work with FUNA. I am always confident that they will do an outstanding job.”

FUNA provided technical design of the venues for Allure of the Seas as the company had previously provided for sister ship Oasis of the Seas, under contract to the ship owner, Royal Caribbean. Under contract to the ship builder, STX, FUNA realized those designs, providing equipment, installation, and commissioning. Allure, like Oasis, was a vast, specialized contracting project for FUNA from a management and logistics viewpoint not only in the sheer size and number of venues, but also having to work within the unique requirements of international cruise ship construction. FUNA’s various entities came into play: FUNA Oy (detailed design/installation), FUNA GmbH (commissioning) and FUNA Inc. (design, purchasing, logistics, and commissioning).

“These ships are literally vast, floating, state of the art resorts, of the same complexity and scope as a land-based resort complete with hotel, retail and entertainment but totally self-contained,” says Doug Ellis, Senior VP of FUNA and Program Director for Finland operations. “But – due to tighter safety regulations and a bevy of special considerations unique to marine projects – they’re designed and built to be more robust, more energy efficient and make fuller use of a limited footprint than you find in land construction.”

About FUNA
FUNA International is a global design, engineering, integration and consulting firm employing more than 200 professionals in 10 international locations. The company was founded in 1972 and its headquarters are located in Emden, Germany. FUNA has over 35 years of experience integrating a variety of complex systems encompassing projects from A to Z (well, at least A to W) including Airports to Wind Turbines and everything in between. FUNA’s extensive maritime experience is comprised of vessels of all types including superyachts and cruise ships. These include such high profile projects as the largest cruise ship currently afloat as well as four of the largest superyachts in the world.

In 2007, as part of FUNA’s strategic growth plan, FUNA GmbH Nachrichtentechnik merged with Teledimensions International Inc. (TDI) to create FUNA International GmbH (“FUNA”). Based in the USA, TDI’s experience in both land and maritime projects as well as their business activities in Finland created a powerful blend of synergies. The end result of merging these two successful companies is a global design, engineering, integration and consulting firm consisting of over 150 people and 5 strategically located international facilities to serve FUNA’s clients.

FUNA is certified ISO 9001 compliant in Germany and Finland and is in the process of receiving certification in the United States and is an ICSEPA member. FUNA is also a member of the Themed Entertainment Association.

About STX
STX Europe AS is an international shipbuilding group which aims to be the leading builder of cruise and offshore vessels. The group has a strong position in terms of developing state-of-the-art concepts, technology, processes and products for customers around the world. STX Europe AS comprises 15 shipyards in Finland, France, Norway, Romania, Brazil and Vietnam. STX Europe has approx. 16 000 employees. Formerly known as Aker Yards, the group changed its name to STX Europe in November 2008. STX Europe’s principal shareholder, the international industrial group STX, has approximately 40 000 employees and aims to be a global top player in its core areas; shipping and trade, shipbuilding and machineries, plant and construction, and energy.

Judith Rubin
Judith Rubin ([email protected]) is a leading journalist, publicist, strategist, blogger, content marketing specialist and connector in the international attractions industry. She excels at writing about all aspects of design and technical design, production and project management. Areas of special interest include AV integration and show control, lighting design and acoustics, specialty cinema, digital video and world’s fairs. Judith has ties to numerous industry organizations. From 2005-2020 she ran communications, publications and social media for the Themed Entertainment Association (TEA). In 2013, she was honored with the TEA Service Award. She was development director of IMERSA, and co-chair of the 2014 IMERSA Summit. She was publicist for the Large Format Cinema Association in the 1990s, now part of the Giant Screen Cinema Association (GSCA) and has also contributed to the publications of PLASA, IAAPA and the International Planetarium Society. Already making her mark as a magazine and book editor, Judith joined World’s Fair magazine in 1987, which introduced her to the attractions industry. Launching as a freelancer in the mid 1990s she has contributed to dozens of publications and media outlets including Funworld, Lighting&Sound America, Sound & Communications, Urban Land, The Raconteur and The Planetarian. She joined InPark in 2010. Judith earned a Bachelor of Fine Arts from Pratt Institute. She has lived in New York City and the San Francisco Bay Area, and now makes her home in Saint Louis, where she is active in the local arts and theater community.
Share
Facebook
Twitter
Linkedin
Email
Print
WhatsApp
Pinterest
ReddIt
Tumblr
Previous articleThe Mummies are Coming! Mummies of the World Exhibition Debuts in Philadelphia June 18, 2011
Next articleRichard Cadena Joins PLASA as Technical Editor and Assistant Technical Standards Manager